For my first flight as a licensed private pilot, I decided to do a tour around Mt. Susitna, a 4,396′ mountain that lies just west of the Susitna River, about 35 miles northwest of Anchorage. Called the “Sleeping Woman,” Mt. Susitna is clearly visible from town. I’ve looked at it many times during my flight lessons and thought that it would be a fun destination for a first flight.

I planned out a route and filled out a navigation log to determine the mileage, time and fuel required, checked the winds aloft to determine an approximate groundspeed, and then enjoyed a scenic hour and twenty minute flight out over the mud flats, the Little Su and Susitna Rivers, and over the forested terrain around the backside of the mountain. Although the skies were not as clear as they have been during the past week, the weather was great, with a layer of high clouds and good visibility. There was still a bit of snow on the higher terrain on the west side of the peak, although with most of the snow gone everywhere else, it’s an entirely different world out there. I can’t wait to see everything when it greens up. Shouldn’t bee too long, now, as buds are starting to appear on the trees in Anchorage. I heard that the area west of Mt. Susitna is full of bears! I’ll have to fly back there again later on in the summer and see if I can spot any from the air.

Once past the peak, I flew over the Susitna’s north shoulder, intercepted the 255° radial from the Big Lake VOR and followed it inbound to the station. Although I could have easily flew back to Merrill without any navigation aids, I had promised Dick Ardiaz that I’d practice the VOR stuff next time I went out. I had originally planned a landing at Big Lake, but when I passed the VOR, I realized that I only had about twenty minutes left before I had to be back so I turned and headed straight back to Merrill. I’ll have to hit Big Lake another time. 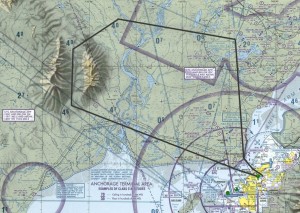 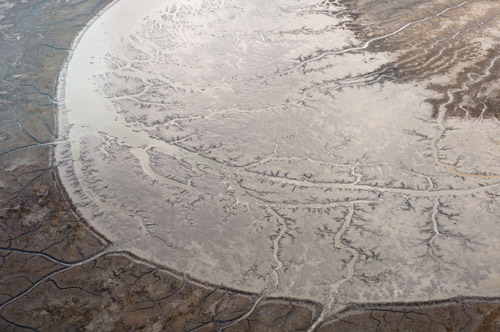 Mud flats on the Cook Inlet

Mud flats at the mouth of the Little Su 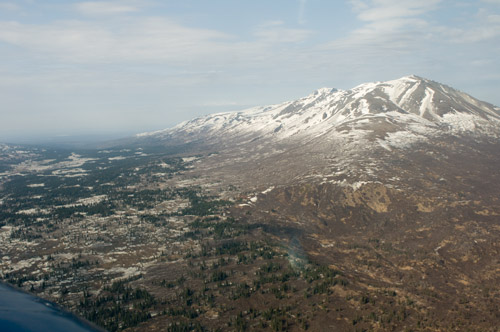 West side of Mt. Susitna 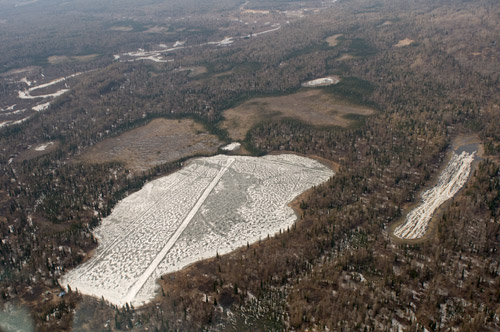