Although I was as giddy as a schoolboy as I rode my bike over to Merrill Field for my first lesson, I wasn’t quite sure what to expect. I met my instructor, Mark, who is the chief pilot at Land & Sea Aviation and we got started. I began by learning a few FAA rules and guidelines that have to do with proper pilot-copilot communication, aircraft documents and requirements and aviation fuel types.

Then we went outside and did the preflight check on the Cessna 172 Skyhawk II that I’d be flying today. I was introduced to the specific airplane checklist and the proper procedures that need to be followed while preparing for a flight. These include checking the fuel type and amount that’s in the tanks, inspecting the tires, wings, flaps, ailerons, rudder, prop and fuselage for any sign of damage, making sure that all moving parts are in working order, and making sure that the plane’s electrical system is functioning properly.

After that’s done, we get into the cockpit, fasten the seatbelts, turn on the transponder, set the fuel selector, and start the engine. It was certainly exciting to see, hear and feel the propellor roar to life out the window in front of me. Mark listened on the radio and obtained current wind and weather conditions and clearance to taxi, and we began moving towards the runway.

Taking off is easy, the plane pretty much does that on its own. I pushed the throttle all the way in and in less than thirty seconds, watched as the ground began to fall away underneath. We turned 180°, climbed  to about 1,500′ and flew over Ship Creek and over the waters of the Knik Arm, which is starting to fill with chucks of ice.

Once we crossed over the arm and entered the “practice area,” Mark demonstrated how to turn, climb and descend the aircraft by using a combination of the yoke, rudder pedals and throttle, and then turned the controls over to me. I practiced some basic maneuvers and discovered two things in the process. 1. I gripped the yoke way too tightly, (it only takes a light pressure and small motions to turn a C172,) and 2. I looked more at the instruments than I did outside. I’m sure that I’ll get over both in short time.

After a few minutes in the practice area, we flew back over the Kink Arm and headed back towards Merrill Field. I spotted the runway, and Mark began to instruct me on the procedures of landing. Throttle out, descend, drop airspeed, flaps down, aim for the end of the runway, level out and flare the nose slightly when we fly over the numbers. Plane slows down, reaches stall speed and wheels settle onto the runway. Done. I got to taxi the plane back to the hanger, using the brake pedals to steer, and when we were parked, we performed the postflight checklist to secure the airplane.

First lesson completed. At the end of it, I found it to be thrilling, but honestly, a bit overwhelming. I tried to imagine doing all this by myself, and asked myself if this is really something that I can do, or even want to undertake. After I settled down a bit, I knew that the answer to both was yes, and and that it will just take time. I went ahead and purchased the private pilot learning kit, which includes the thick hardcover learning manual, private pilot and FAA practice test books Federal Aviation Regulation manual and a flight computer.

I’m excited for my next lesson, but before then, I have some reading to do. 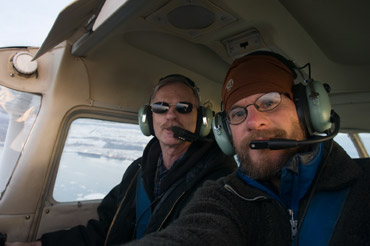 First flight in a C172 with Mark the instructor

This entry was posted in Flight Lessons and tagged instruction, lesson, practice. Bookmark the permalink.