We had overcast and four inches of fresh snow last night, but by morning, the skies were plenty clear enough to fly. The hangar doors were frozen on the tracks and we couldn’t get them open more than halfway, so Mike, the owner of Land and Sea Aviation, maneuvered his VW Golf in between the doors and drove them open. We pushed 645 out into the snow and started her up, and then I learned how to taxi an airplane on an unplowed taxiway. It’s very much like driving a car in deep snow- you simply give it considerably more throttle so that it doesn’t get stuck. 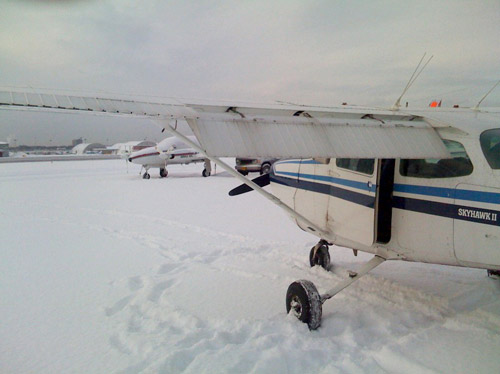 Once we had clearance, we turned onto runway 25 at kilo and I performed the takeoff procedure with almost no assistance. I’m still getting used to the rudder pedals, especially when on the ground, but like everything else, proficiency will come with time.

Once over the practice area, Mark gave me a lesson on emergency procedures, specifically, what to do in case of an engine failure. That doesn’t happen very often, but it’s certainly a possibility and it’s a good idea to know how to handle that kind of situation. Essentially, you need to look for a suitable place to land. Up here in Alaska, small landing strips are not hard to come by, and in the wintertime, frozen lakes make great landing zones. Other options are fields, empty roads; basically any place without trees or buildings.

The nice thing about airplanes is that they fly. Even without the engine running, a C172 will glide for quite a few miles, depending on your altitude and providing you establish the optimum glide speed. (Think balsa wood glider.) This will give you plenty of time to look for a safe place to land the plane and alert the ATC to your emergency.  Mark demonstrated this by cutting the power back to idle, which basically turned the aircraft into a glider, just one made of metal instead of balsa wood.

We were pretty close to the Goose Bay landing strip at the time, so we circled a wide approach, which gave us time to lose the needed altitude, and then lined up as if to land on the strip. It’s actually a pretty neat exercise, and in some ways very simple illustration of pure flight mechanics and aerodynamics.

Next, Mark demonstrated steep turns, which are turns that are done at a bank angle of about 45 degrees. Steep turns are much more exciting than shallow standard rate turns, and I can see how they could possibly come in handy. While he made the turns, I tried to concentrate on what the front of the plane looked like against the horizon as we came around. That’s what visual flight is all about, using your eyes and the learned visual references that come with time and experience in the aircraft.

I also got some more ‘hood time.’ I put on the special opaque bifocal old person looking glasses and performed a few turns, straight and level headings, and climbs while using only the instruments for reference. I seem to do well at this, probably because it’s pretty much like using the simulator. Next, I practiced doing a power-off stall, which we had worked on last week. I had trouble getting N13205 to stall in my previous lesson, because that plane has stall strips on the wing, which allows it to fly at extremely low airspeeds. This time, however, I had no trouble getting 654 to stall. I slowly pulled the power back as I pitched the nose up. As the plane slowed to near stall speed, the controls got pretty mushy, and then suddenly, the stall horn sounded and the nose just dropped out of the sky. I immediately pushed the power back to full and brought the nose up towards the horizon. I couldn’t see the horizon, though, as some clouds had started to come in from the west, so I had to use the attitude indicator for reference.

We completed the lesson with two touch and go’s before final landing. I did pretty well, and can see that I’m definitely improving in this area, which is very exciting. I’m flying smoothly around the pattern, and I’d say that today, I probably performed about 75% of the landing controls, with Mark assisting. Getting better and more comfortable each time. I’m still brining the nose up a bit too much on the flare, which can make the plane balloon back up, so Mark had to help correct for this, but all three times, I lined up well on final with good airspeed and descent rates, and held the yoke back until I felt the plane settle onto the runway. Landing is indeed one of the most challenging things to learn, so it’s very exciting to start to get it down. I’m curious to see how I do next week!