Flying Over the Ruth Glacier

My dad had his first visit to Alaska last weekend, and since he’s a pilot too, I took him flying. Being from Ohio, he’s never seen mountains or glaciers like we have here, so it was pretty special to take him on a flightseeing tour of the area. He’d wanted to see Mt. McKinley, and so on Monday morning when I checked the Talkeetna web cam and it showed mostly clear skies over the Alaska Range, I made the decision to try and fly into the Ruth Glacier, which is one of the biggest glaciers in Denali National Park. 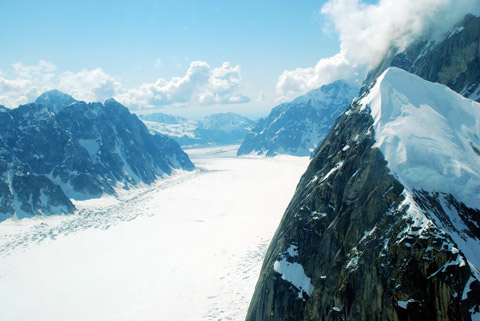 Looking down the Ruth Glacier, Alaska

I’d been in the Ruth a few years ago on a climbing trip, and so even though it’s very remote and incredibly rugged, I felt somewhat familiar with the area. I planned the route out to make sure that we’d have enough fuel on a single tank to get there and back, filed a flight plan for the route, and then flew what was a dream flight over some of the most awesome terrain on the planet.

At this point, I haven’t done very much mountain flying, and so as we flew over the entrance to the glacier, I was well prepared to play it safe and turn around at the first sign of high winds, mountain wave turbulence, or any other weather condition that might be hazardous. We encountered nothing but smooth air and mostly clear skies, though, so we kept going up the glacier, through the Great Gorge, past the 5,000-foot tall granite north face of Mt. Dickey, past the 10,000-foot Moose’s Tooth, and all the way into the Ruth Amphitheater. 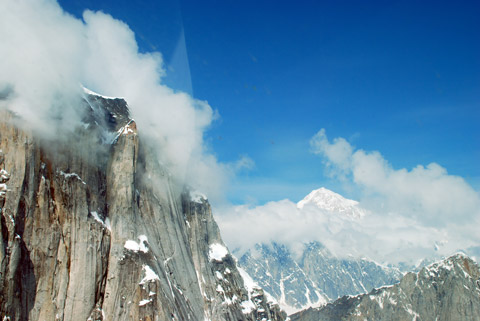 View of Mt. McKinley from the Ruth Amphitheater, Alaska

The views were incredible, and my dad clicked away with his camera as we circled around the Amphitheater at 7,500-feet and looked at Mt. McKinley, Mt. Dan Beard, Mt. Huntington, Mt. Barille and all the other peaks in the area. It was really cool to be able to show this stuff to him and it was extra special for me, since I remember flying into the Ruth with Talkeetna Air Taxi a few years ago and thinking, I am going to do this someday!

As we flew out, we turned and crossed over into the Tokositna glacier valley and flew low over the lush green valley, looking for wildlife before heading over to Talkeetna. Didn’t see any, though. I imagine all the bears and moose were basking in the shade under the thick overgrown forested areas. 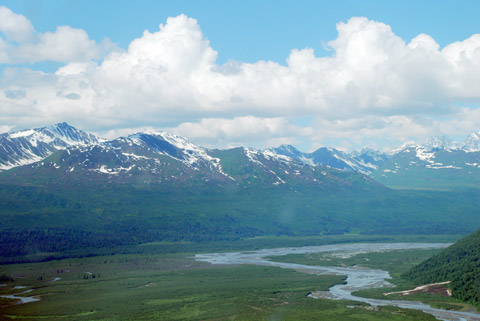 I’m finding that mountain flying doesn’t intimidate me as much as I would have thought. In fact, I feel quite comfortable flying in the mountains. Initially, I wondered if I was just experiencing some novice false confidence, but when I gave it some thought, I realized that having spent a great deal of time in the mountains, I’m actually pretty knowledgeable about mountain wind and weather patterns. With that knowledge, safe mountain flying seems largely rooted in common sense. As long as I leave myself a way out and and remain ready to turn around if anything changes, and as long as I know what my airplane’s capabilities are of in terms of density altitude and distance needed to climb, I feel genuinely safe and confident.

Without a doubt, it was definitely the coolest flight I’ve done yet, and it even put me over my 50-hour mark. Special thanks to my dad for helping inspire me to get my license and for being my first passenger on a fabulous blue sky Alaska summer day.