Wind, Rain and Clouds: Getting a Feel for Alaska Weather

I’ve got a long way to go before I can consider myself a seasoned Alaska pilot, but I can work towards that by challenging myself and flying in less than ideal meteorological conditions. I know that pushing my limits bit by bit will expand the envelope of my piloting skills and hopefully fine tune my judgement about when to go and when to say no. My three most recent flights took place in slightly challenging conditions, and they were all great learning experience.

Wind: When I got to airport one day a couple of weeks ago, the winds were blowing pretty strong from the south. The windsock was pointing straight out, although not fully filled, so I knew that it was less than 15 knots. The ATIS said 150 at 12kt, which could potentially make for a tough crosswind landing, but I figured that I could always come back in to Merrill on Runway 16, which would have me landing directly into the strong wind. I’d done that a few times before, so I felt ok about my decision to go.

Remembering to keep my upwind side aileron up, I taxied over to Runway 25 and did a solid crosswind takeoff, and then turned over the Glenn Highway to head East. Then, funny thing happened when just a few miles north, I tuned into the Birchwood AWOS and heard something like 250 at 3kt: a very slight, almost no existent wind from the west. Just goes to show you how localized the weather can be up here around the Anchorage bowl.

Just to the north, up around Palmer, however, the view was filled with dark gray clouds, which I wasn’t about to head into, so I did one touch and go landing at Birchwood and then headed west over the water. I flew over the gravel strip at Goose Bay and completed the circle by heading back to Merrill, where the wind was still strong as ever. By the time I got back, 16 was the active runway anyway, so I concentrated on flying a smooth, controlled pattern and landed nose into the gusty headwind.

Rain: The other night I went up with another Civil Air Patrol pilot and practiced ELT searches over Wasilla. Searching for an ELT is pretty much like searching for an avalanche transceiver, essentially, you listen for and try to follow the signal on the radio as it gets louder and softer. The louder the signal, the closer you are. It’s pretty simple, but things can get a bit challenging when you’re trying to deal with the weather. 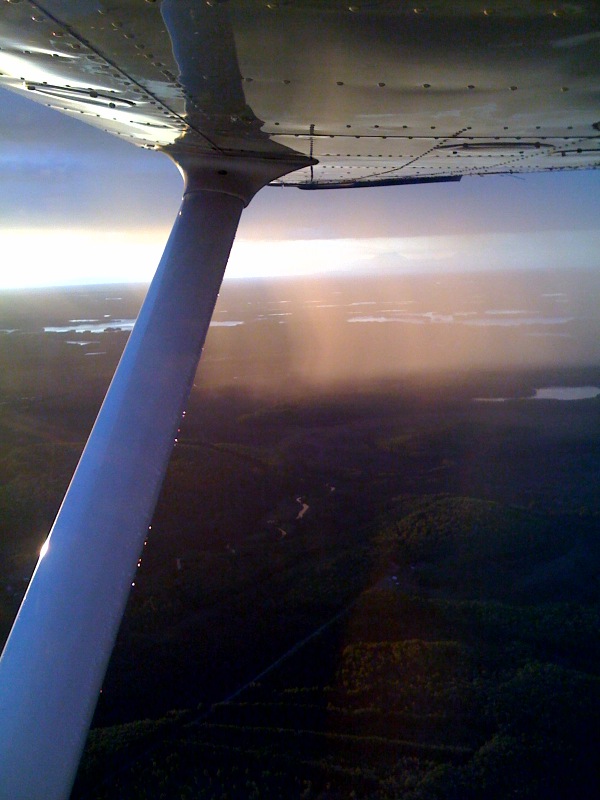 While flying our search patterns, we kept running into small patches of light rain that was scattered all over the Mat-Su valley. None of it was very thick, so it wasn’t a big deal to fly through the rain, it just caused short periods of decreased visibility.

You wouldn’t want to fly for extended periods through rain like that, but we could pretty much see the other side of the clouds, so it wasn’t too big a deal. Plus it was late in the evening, when the air was more settled. I would be much more wary in the middle of the day when there could very well be lots of rising air and cumulous clouds. This was just light virga.

Overall, it was a beautiful, calm evening, and as the sun dropped closer towards the horizon, the orange light streamed through the virga, making it seem like the ground was on fire.

Clouds: Another CAP training mission, this time with a CFI. This time we were going to head up towards Big Lake to practice grid search navigation. The weather was somewhat marginal in Anchorage, but checking the local conditions, it seemed as if the areas to the north had high enough cloud ceilings.

Unfortunately, we couldn’t get out of Anchorage. After take off, we ran into a 1,200′ cloud ceiling trying to get over the water, so asked the tower if we could turn around and try for an east departure. we turned around. He approved, so we headed out towards the Glenn Highway, but were quickly boxed in under a 1,000 layer of thick clouds that were sitting right up against the Chugach foot hills. We flew north for just a couple of minutes before turning around and heading back to Merrill for some landing takeoff and practice.

If I were by myself, I probably wouldn’t have attempted a flight in these kinds of conditions. With an instructor, though, I was able to safely push my limits a little bit, get a feel for what the weather can do around here, and gain the confidence to get out of it if needed.

This entry was posted in Flight Lessons, Solo Flight and tagged MVFR, weather. Bookmark the permalink.