I’d been looking forward to my long cross country. In some ways, it’s the culmination of my flight instruction and the real test of my piloting skills. The requirement is to fly to and land at a destination that’s at least 100 miles from my home airport, and then fly to and land at a third airport at least 50 miles away. My itinerary for this flight would be Anchroage-Home-Kenai-Anchorage.

The weather was beautiful and clear for my flight yesterday, and forecasts for all three locations called for VFR conditions the entire day. After calling the FSS to file my flight plan and get an updated weather briefing, I went over my proposed route with my instructor and took off from Merrill. 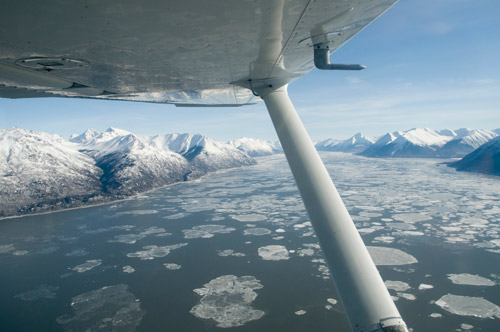 The air was incredibly smooth over the Turnagain Arm, much calmer than the two times I’d flown over it. I turned at the HOPER checkpoint, and then when I passed over the mouth of the Chikaloon River bay, I turned south to a heading of 182°. I checked my stopwatch as I passed over each of my checkpoints and noted that I was pretty much right on with my estimated groundspeed and times.

Flying down just to the west of the Chugach Mountains, I could see some of the glaciers of Kenai National Wildlife Preserve as I got farther south. It was a a breathtaking sight and I spent some time doing quality sightseeing in between checkpoints. 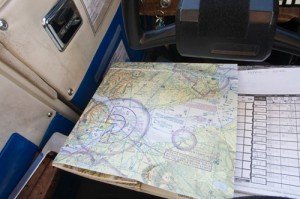 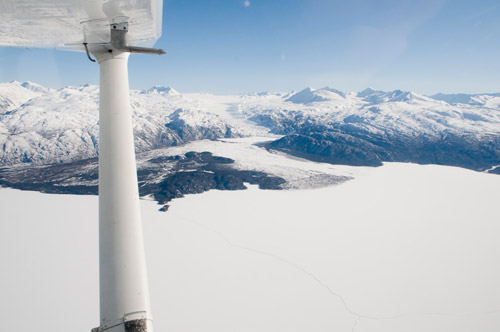 I tried hard to maintain steady altitude as I flew, especially during the times when I looked down at my map. Having always liked maps and the process of navigation, I find it incredibly enjoyable to navigate by sectional as I fly over the terrain and try to identify my location by identifying features on the ground below me. I’m also fascinated by the seemingly simple process of VOR navigation, and although it’s quickly being replaced by GPS as the desired method of route finding, I find comfort in those needles and radio codes.

In planning for my route, I had chosen to fly straight down towards the mouth of Kachemak bay, and then turing and following the coastline down to Homer. This meant flying to the west of a low, broad mountain, since I had decided on an altitude of 2,500 feet. As I got farther south, though, I noticed a low bank of clouds that sat in the low valley between the Chugach and the broad peak. Since, as a VFR pilot, I’m to treat clouds essentially as brick walls, I suddenly found myself needing to make a choice. My options were to climb and fly over the clouds and then drop back down towards the bay as I passed, going west around the low mountain and approaching Homer from the north, or dropping underneath the cloud bank.

The weather was more clear to the west, but it would mean adding some distance to the route. I wasn’t sure how thick the clouds bank was over the bay, so I didn’t really want to head underneath it. I chose to climb, but as I ascended to 4,500 feet, I could see that the cloud bank extended quite a ways over Kachekak bay. 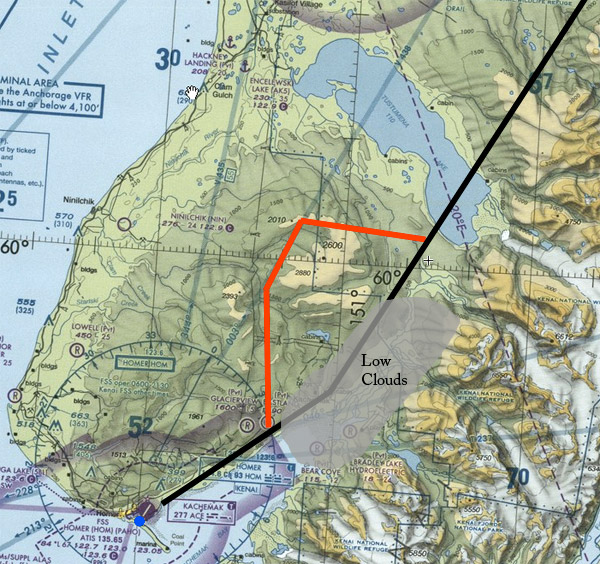 Since I didn’t want to end up stuck above the clouds near Homer, I changed course and began heading straight west, hoping to pick up the 003° radial from the Homer VOR. I called FSS on the radio and amended my flight plan.

As I flew around the low mountain, I tuned into the Homer ATIS and heard 1,600 foot broken for the cloud layer. I realized that with that kind of cover and the hilly terrain, I couldn’t just make a straight shot into Homer from the North either. I didn’t want to keep heading west, so I picked a route through clear air around and below the broken clouds, turned southeast and eventually made it to the bay. Turing towards Homer, I caught sight of the runway, so I called the CTAF, announced my inbound and tracked straight in for landing. There was a strong headwind on the runway, and my touchdown was a bit hard.

After taxiing down the very long runway, I turned off, parked the plane and got out to take a few pictures and look around. It was a bit surreal that I was actually standing there in Homer, and I spent a few minutes just thinking about that. When I was ready to continue, I got back in the plane, started the engine and taxied back down the runway, before turning around and taking off into the wind.

Tuning my nav radio to the Kenai VOR, I tracked north through clear air and spent a bit of time enjoying the view of Mt. Redoubt standing there across the Cook Inlet. 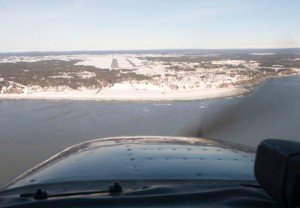 When I was about 10 miles from Kenai, I called up on the radio and began my approach. The wind was 270 at 7, which meant that I’d be doing a crosswind landing on runway 1L, and as I came in, I actually pulled it off pretty well, dropping the left wing and letting the upwind wheel touch down first. I taxied back, did one more practice takeoff and landing, which wasn’t as good as the first, and then took off and returned to Anchorage. I’d flown this last leg twice before and so navigation was pretty easy, although at one point, I tuned my nav radio to the wrong frequency and wondered why my needle wasn’t lining up.

Overall, I felt really comfortable with everything that happened during a four hour round trip that involved some real decision making and execution. I tried to focus on being relaxed in the cockpit and fine tuning my general efficiency and techniques. I felt like a real pilot on this flight and got an even bigger taste of what flying will be like when I get my license. With this long cross country now complete, all that’s left to do is start prepping for my written exam and my checkride.