The other day I had an assignment to shot the interior of Speedway Cycles here in Anchorage, which is where they build Fatback snow bikes.

Of course photographing any interior can be a challenging… no make that a downright scary proposition, especially when you’re dealing with a mix of daylight and sucky fluorescent lighting. Here’s a straight ambient shot of the store, complete with bad color cast, dark corners and unworkable contrast. 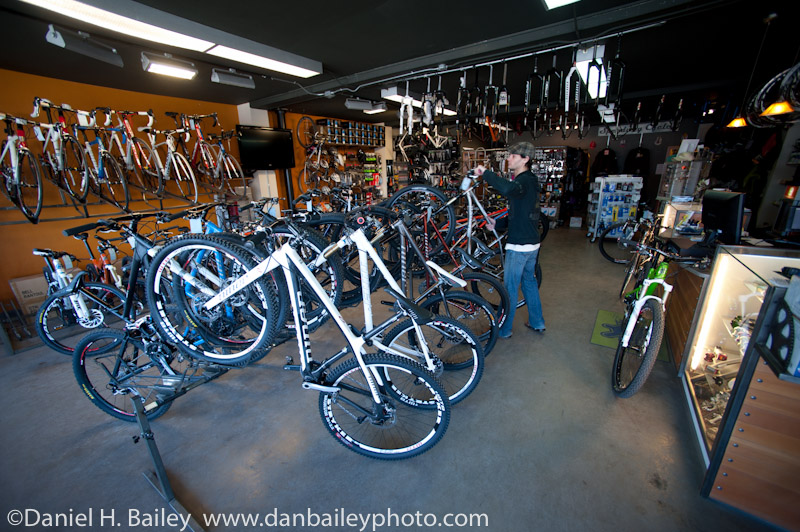 Armed with my Nikon D700, the Nikon 14mm f2.8D lens, a Nikon SB-900, a pair of Nikon SB-800 Speedlights, and a Nikon SU-800 Wireless Commander. I took charge and attempted to wrangle this scene into submission. First charge was to try and bring a little fill into the left side of the frame, since my job was to highlight the bikes up front and center.

I stuck the SB-900 over there in the left corner and put the dome diffuser on to try and give me some softer, more even light. For the back of the store, I clamped one of the SB-800s (also w/ dome diffuser) onto a fixture and pointed it across the shop.

Here’s the result: Color balance better. The front is lit nice and soft, but right side of the store is still dark. The back doesn’t work very well, because although I see the back wall so much more, I’m losing the middle section of the store- you know, that big rack of finished Fatbacks. 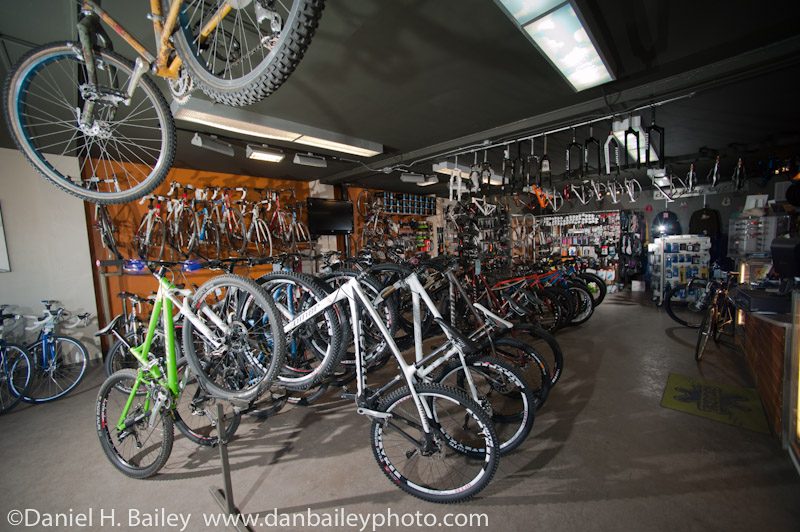 Analysis: Aside from the light problems described above, it’s boring. Nothing stands out and there’s really no dynamic element about the image. Plus you can see that flash in the back of the store.

1. Put the CTO warming gel on the SB-900 and zoom the head to 200mm, which will do three things. First, it will warm up the scene and add flavor, second, it will throw light onto that dark right side over by the counter, and third, it will fill that space with some nice strong shadows as it shines through the rack of bikes.

2. Put an SB-800 on a Manfrotto 74″ Nano Stand, raise it up to the level of the orange bike that’s hanging in from the ceiling and put a Lumiquest Softbox III onto the flash head. That help light that hanging bike and also throw some fill into the bike rack up front. The Softbox will soften the light just a little bit, but not so much that it just scatters all over the place and loses focus.

3. Take that SB-800 in the back of the store and clamp it to the shelves on the far right of the shop (out of frame) with a Manfrotto 175F Justin Clamp. For that unit, I took the dome diffuser off, zoomed to 105mm and angled it one click up. That makes it throw nice hard light across the shop, illuminate the middle and back sections of the store, and bring out all those cool looking Fatback forks that are hanging from the ceiling. 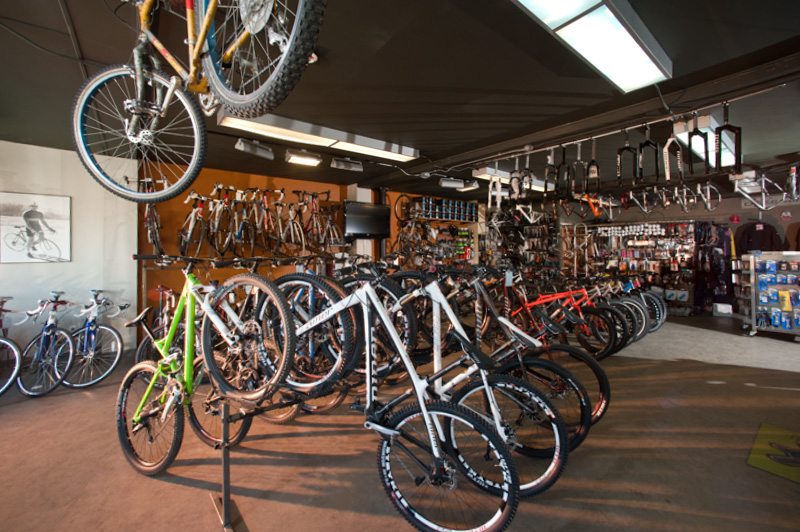 The shop is lit well front to back, the warm color and long shadows add great interest, the bike above it evenly lit, and it stands out against a darker background, since the zoomed SB-900 isn’t bleeding light up on to the ceiling anymore. Plus, that third SB-800 in the back effectively throws a nice spotlight onto all the Fatbacks. That hard patch of light also helps break up the flow and add a sense of depth to the entire scene.

I did try a few different setups, but the one described above gave me the best results. I also tried shooting hard zoomed light through the bikes on the left wall, and I also varied the placement of the back right flash. All the flashes were controlled and trigged with the SU-800, which works incredibly well as a commander.

Looking back, I think I’d like to see a bit more light in the back left corner of the shop- it’s still a little dark over there. I’d like to think I’ve learned for next time.

Oh, and the best part of the whole shoot was when a customer was standing in front of the shelves near the back looking at the selection of energy bars. Since I was shooting up front, and obviously a little wrapped up in what I was doing, I didn’t notice her, and she didn’t notice the SB-800 that was Justin Clamped to the shelf at eye level right in front of her.

Imagine her surprise when the thing went off.