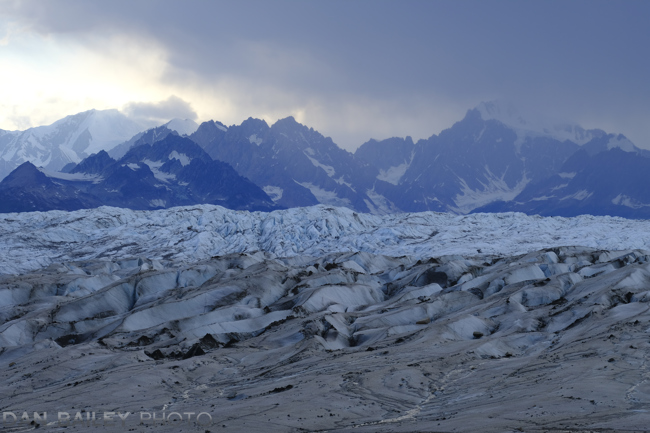 I love “flying to hike” with my little Cessna bush plane, and one of my favorite types adventure is when I land near a glacier and actually hike up on to the ice. I’ve done this on the Knik Glacier and the Lake George Glacier, and a couple weeks ago, I hiked all the way up onto the Triumvirate Glacier, which lies along the eastern edge of the Tordrillo Mountains, about 60 miles west of Anchorage.

The trick is to find a gravel bar that’s relatively close to the glacier, and that’s smooth enough to land on. However, even if you nail that part, it’s never a given that you’ll actually be able to get onto the ice.

Even if you’re able to land close enough for day-hiking striking distance, you can easily be shut down by a wide and swiftly running braided river or glacial lake. Or any number of other impassible features in the accompanying landscape.

I’d been eyeing the Triumvirate Glacier for a few years as a potential day hike. Up until recently, I could never find a suitable landing spot that was close enough and that gave me potential hiking access without being cut off by water. Until last week.

Flying out there on an exploratory mission one evening, I spotted a sandbar that was long enough for the Cessna, (I need about 350-feet to land and about 600-feet to take off). It was also way closer than the sandy strip located about two miles west and on the other side of the river. 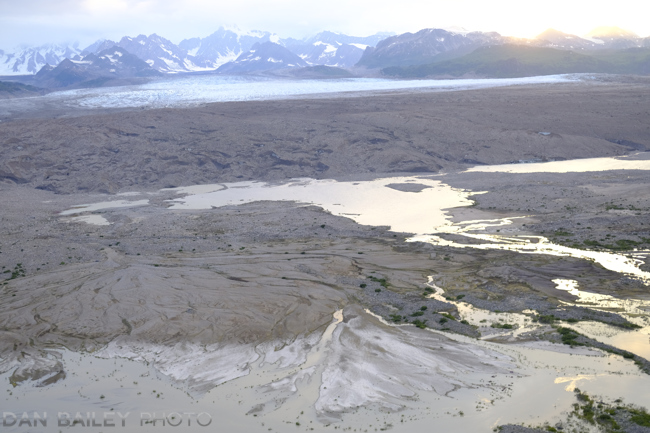 I landed on that white alluvial fan near the bottom right, and hiked around the left side of the glacier lake to access the moraine. From there, it was a long, dirty, muddy slog to reach the ice.

My landing went quite well, I had a brisk, 10kt headwind that aided me with a nice, slow approach. After making two test passes, I skimmed in right over the water and set the plane down on the relatively soft sand.

Once I shut her down, I got out and paced out the landing area so I could get an accurate measurement of how much room I’d have during takeoff. From water to the place where it starts getting bumpy, I walked out about 900 feet. That’s plenty of room, even with a softer surface. Even without a headwind, I should have no problem.

Returning to the plane, I grabbed my pack, noted the time and set off on my hike, having no real idea how far I’d make it or if would even be possible to get up onto the ice. 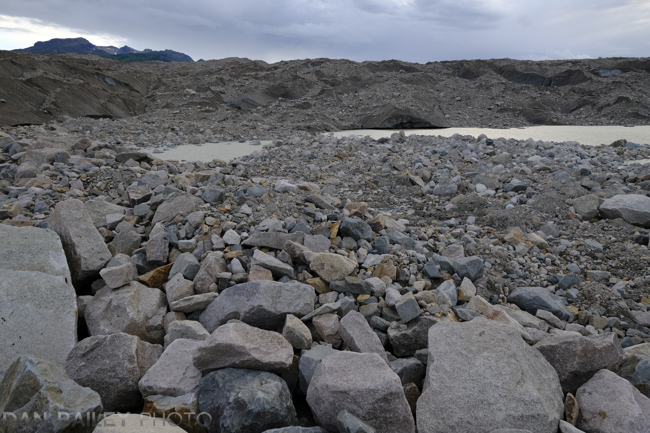 Looking toward the moraine. It looks a lot different and much further away from ground level!

The first of the hike was flat, but it went from sand to talus pretty quickly. I had to navigate a couple of small water crossings, but they weren’t bad at all; I didn’t even get my feet wet. The ground got a little muddy as I reached the other side of the lake and made my way to the base of the moraine, but I was able to hop from rock to rock to keep my feet dry. 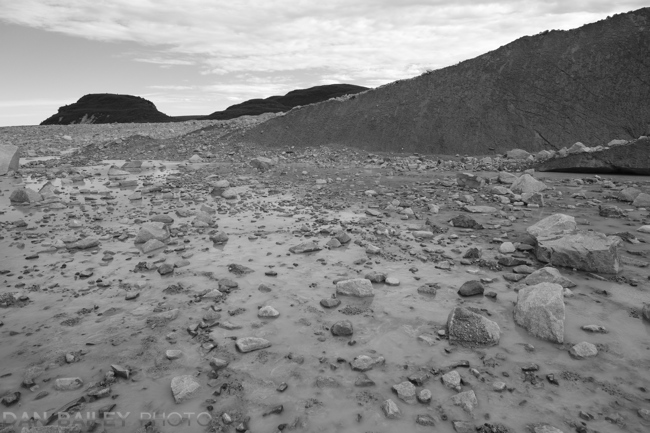 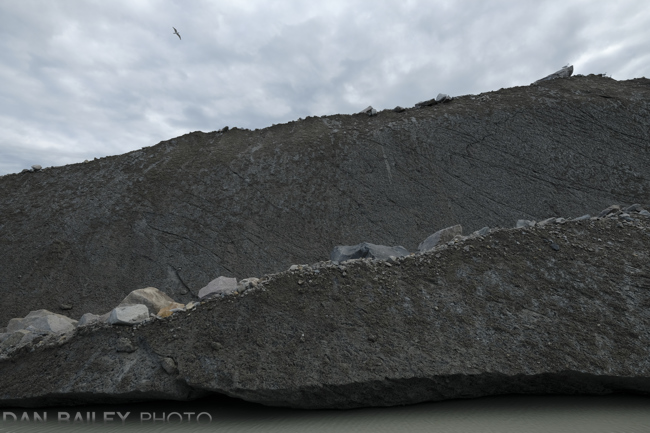 Then the slog began.

A glacial moraine is essentially an enormous, messy debris pile. As the glacier moves down the mountain, it pushes an immeasurable amount of rock and dirt in front of it as it grinds down the landscape. The result is a huge conglomeration of rock, mud, sand, and even huge chucks of ice. We’re talking ice blocks that can be as large as a cruise ship, or at least the size of a Beverly Hills mansion.

Walking on a moraine is an activity not for the faint-footed. The terrain moves with nearly every single step, so you have to move constantly, at least through certain sections until you find a small patch of stable ground. The really tricky parts are the slopes that are really just chucks of black ice covered in sand. Trying to walk up is impossible in regular shoes, so you often find yourself constantly weaving and re-navigating.

It’s non-stop up and down, weaving through small troughs, over scree hills and talus slopes and following sandy ridges as you try to make your way to a specific point you might have spotted below. Then when you get there, you make another spot and continue on. Hiking chaos that goes on and on. 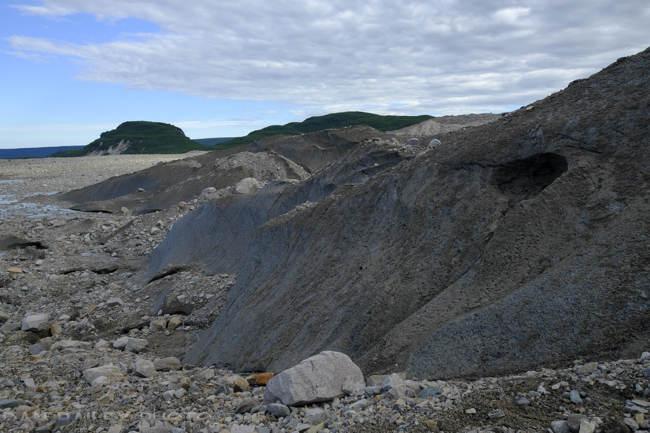 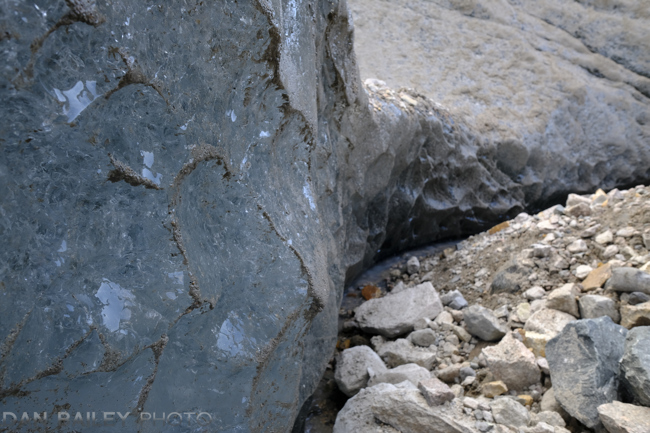 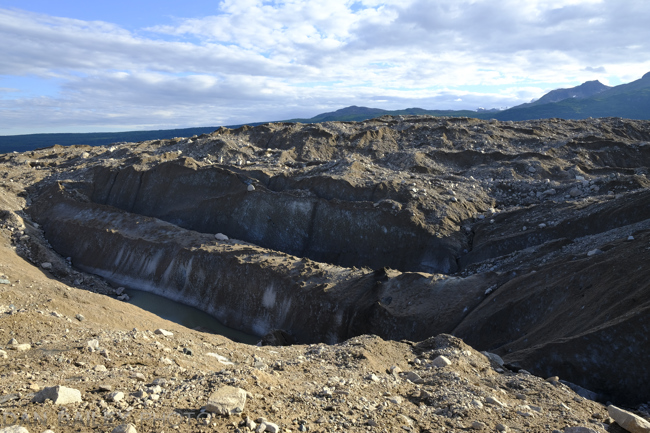 Moving quickly, I pushed on, with my trusty Fuji X-T2 slung around my shoulder. The higher I got, the more expansive the moraine seemed to be as it revealed more of its massive self to me. Eventually, got my first glimpse of the ice, but it still seemed so far away. I began to doubt whether I’d be able to reach the ice, but I keep pushing those seeds out of my mind and set my sights on the next hill.

Although routefinding was a challenge, what concerned me more was finding my way back, especially since there is no trail of any kind on this huge disaster pile. Fortunately, as you can see in the picture above, there were definitely some identifiable and rather unforgettable landmarks. Lower down, I even built two cairns that would hopefully keep me on track. 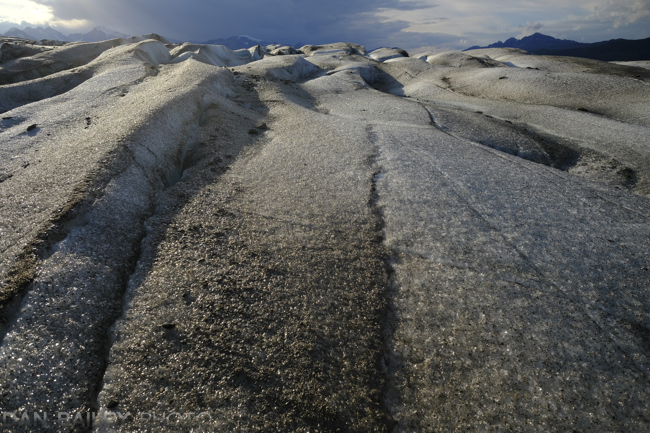 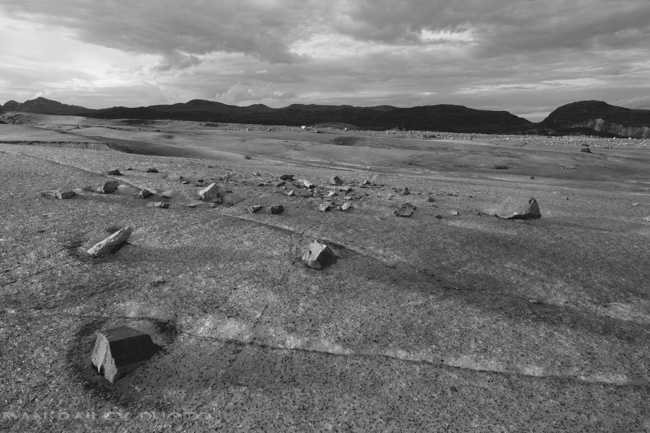 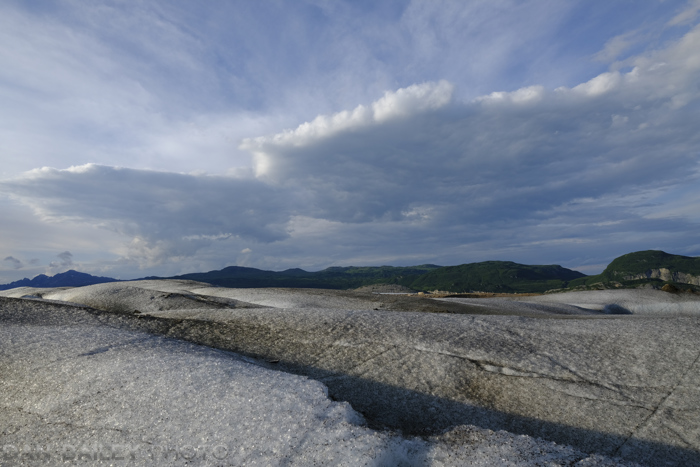 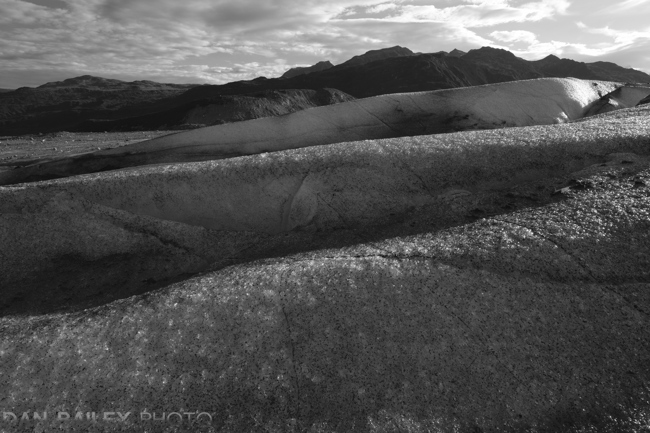 Finally, after a long, two-hour slog I got within striking distance to the actual glacier. From there, it was only a short stretch, although the final bit in front of the ice was about 50-yards of mucky, ankle-deep mud that resembled quicksand. It took careful and rather adept rock-hopping to clear this final barrier, and eventually, I stepped foot onto the Triumvirate Glacier.

Fortunately, the lower section of the glacier was relatively flat featureless ice that gradually sloped up towards the first folds and jumbles. I was able to walk a few hundred feet before it got too steep.

By now, it was 9:00PM, so I didn’t have long before I had to turn around. Unslinging my X-T2, I shot a series of photos, alternating between color and black and white. I mostly shot with the XF14mm f/2.8 wide angle lens. As I started my hike back, I turned around and captured some compressed telephoto shots with the XF90mm f/2 lens, even shooting a couple of in-camera panoramas. 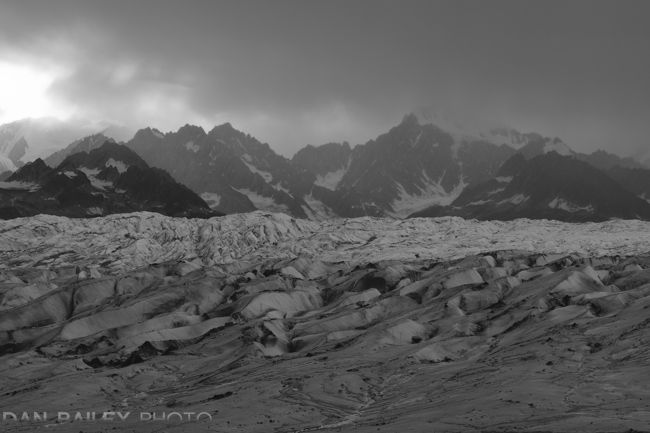 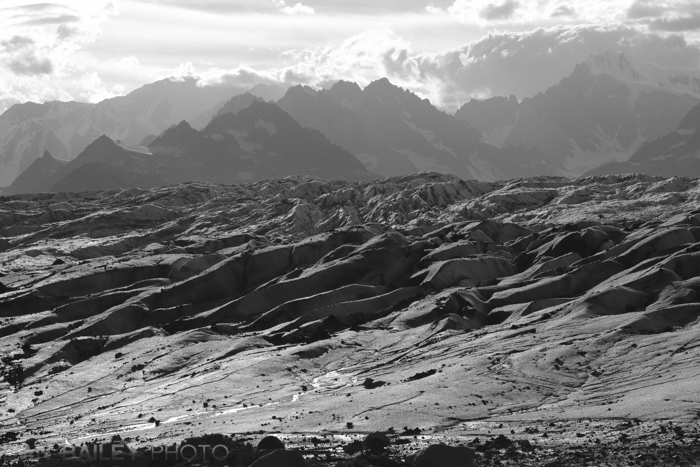 The hike back went smoothly, or so to speak. Tromping, running, sliding, skidding, hopping, and mashing your way down a glacial moraine is hardly a smooth process. However, I successfully retraced my path and even passed by my two cairns again before defending the final hill down to the base and beginning the mostly flat walk back to the plane.

Arriving at my little yellow Cessna just over an hour after I left the ice, I started her up, taxied back across the sandbar, waited for the dust from my prop wash to settle, then took off with room to spare. After making a quick circle over the toe of the glacier, to mentally retrace my steps, I turned and began my 40 minute flight back to Anchorage under the color of the setting sun. 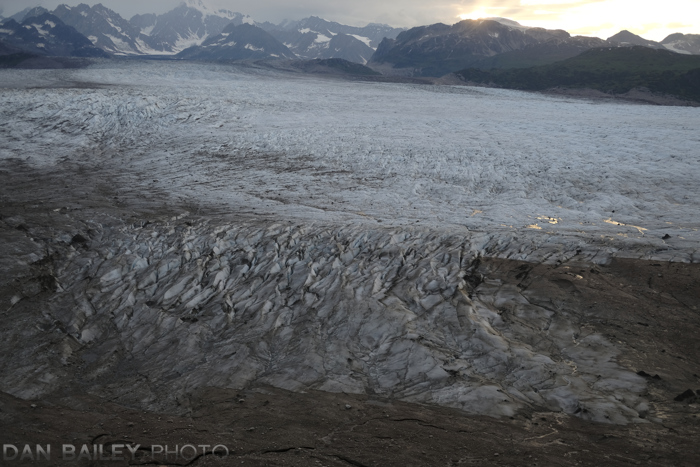 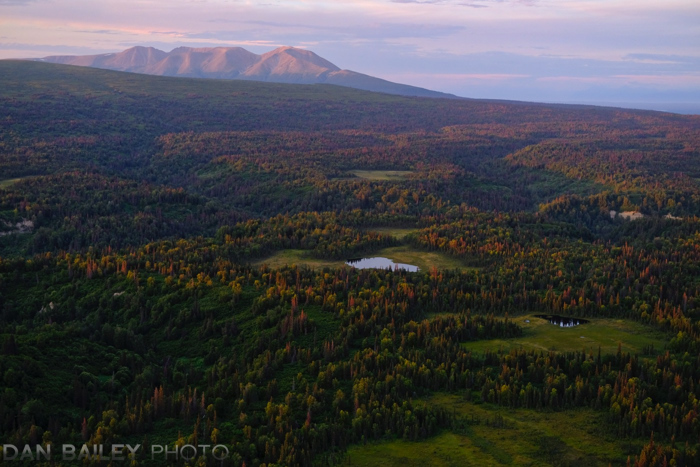 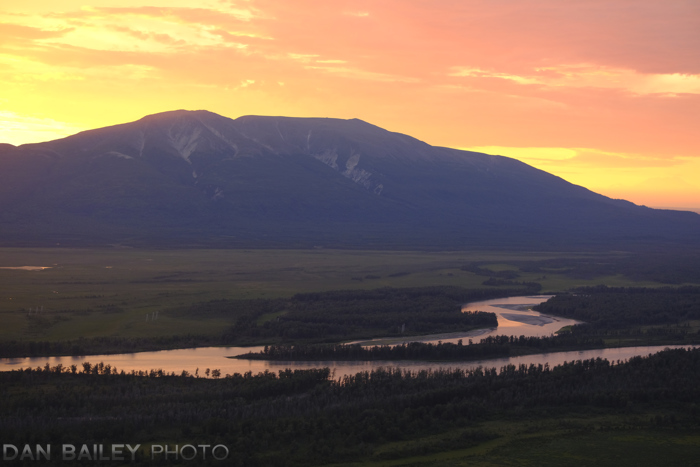