What are the chances? Two off-camera flash eBooks released on the same day? Yesterday Craft and Vision released the Making Light 2, the second in a series of off-camera flash titles by Belgian photographer Piet Van den Eynde.

And yes, as you’ve been reminded about 827 times on Twitter and Facebook, I released my own flash eBook, Going Fast With Light. I’ve already written enough about mine in the past few days, though, so I’ll let somebody else do a comparison between the two if they like. Actually, that would probably be a good idea. Who wants to get on that?

I’m not too proud to give some room to the competition, though, so today we’ll look at Piet’s book. Making Light 2 continues off where Making Light 1 left off, which dealt mainly with using one remote flash, one umbrella, and a small softbox. Making Light 2 covers advanced lighting techniques and some new light modifiers that go beyond the basics.

He starts by explaining High Speed Sync in more depth, and then moves on to working with multiple flashes. Piet comes at this from a classic studio approach and he outlines how to build a lighting scheme for a subject from the ground up, starting with no light and then putting together a mix of speedlights that all compliment each other in the final shot.

Going further, Piet explains using multiple flashes for more power, such as when shooting in exceptionally bright sunlight. He even goes into the realm of using bigger lights, like the Elinchrom Ranger Quadra set, which puts out the equivalent of 4 SB-900 units into a small, battery powered kit.

The next section deals with light modifiers and other gear. Small softboxes. Big softboxes. Even bigger softboxes. Grids. Snoots. Flags, gels, brackets, clamps and more. All gear that you can use to affect the quality of the light that you bring to your scene.

The meat of the book, deals with ten specific images, or case studies as Piet calls them, where he details the specific lighting scheme and approach that he took to solve problems and create each image. There’s a real variety of photography in this section, from bright, sunlit action (skateboarding at noon), conceptual high speed sync to freeze water droplets, motion, gelling for effect (India portrait), clamshell lighting (high key soft portraiture), combining flash and HDR and more.

Piet closes with interview/case studies shot by four other photographers. Each one is in a different style and so each person comes at it with a different approach. There’s a good mix of material in this section, and it’s a great way to end the book.

My overall impression? I just wrote and published an 83 page book on flash and I actually learned quite a bit of new stuff while reading through Piet’s book, Making Light 2. You will too. He’s a great photographer, a very clear writer and his book is full of great information, very good illustrations and lots of insight. Makes me want to go back and read Making Light 1 now.

My point is that no one single person has all the info you need to be a great photographer, especially when it comes to flash. Not me, not Piet, not Joe, not anybody. We all have different shooting and teaching styles and you the more sources you gather for information and inspiration, the more well rounded you’ll be as a photographer.

I’d definitely recommend Piet’s book, whether you buy mine or not. Heck, buy all of them! Together, they still cost less than a half tank of gas and will fill you with enough creative ideas and knowledge to keep you busy for quite awhile.

I’m releasing a brand new eBook today that will change your photography.

Going Fast With Light- A Flash Guide For Outdoor Photographers is an 83-page manual that will show you to use off-camera flash in the context of active outdoor photography.

In Going Fast With Light, I show you lighting techniques you can use to bring your imagery alive, and a selection of flash gear and light modifying tools that will still let you pack fast and light.

I break off-camera flash use down into a simple checklist and workflow that makes it easy to understand and apply to your own subjects. I show you how to make your photos really pop with the use of a single flash, as well as with multiple flashes.

Essentially, I’ve taken all the flash knowledge and strobist-style lighting techniques that I’ve learned over the years and boiled them down to a style that fits with my own active outdoor photography methods. I’m betting that many of them will apply to your style as well.

Whether you shoot action, sports, adventure, exotic locations, portraits or your kids playing in the park, your imagery can benefit from the occasional use of flash. Even just one well placed strobe can make a huge difference. However, the key to all this is learning how to build a diverse set of gear and skills so that you can shoot in bad light with speed and confidence.

The key is learning how to Go Fast With Light.

Download this book today, jump on a new creative path with your photography and see why good light doesn’t have to slow you down.

[Lumiquest Promotion: The awesome folks at Lumiquest have kicked in a special offer to help with this launch. The first 50 people who purchase a copy of Going Fast With Light will receive a coupon code worth $5.00 off orders over $25.00. This offer is ON TOP of whatever other discounts they have on the site right now. (They’re currently offering free shipping on orders over $35.00 and 20% off specialty items.)]

When you read the book, you’ll see that I recommend a Lumiquest gear and use a number of their products in my off camera flash photography. It’s especially made for going fast with light.

Shot another cyclocross race here in Anchorage over the weekend. Great fall day with lots of sunshine and warm temperatures!

The first two photos were shot with the 80-200mm f/2.8D lens, using straight ambient light. I love this lens for sports and could have shot with it all day. However, it’s always good to shake things up, so after only a few frames, I packed it up and brought out some other gear.

The third shot was made with a 24mm f/2.8 lens, and two Nikon SB-800 flashes on a stand placed just to my left at the edge of the course. I underexposed the background by almost two stops and then exposed the rider at 1/160 sec. f/22 as he rode by.

The last shot was made with the 50mm f1.8 lens, same setup on the flashes. I don’t often use the 50mm for sports and action, but it’s fast and works great with shallow depth of field if can get close enough to your subject.

I was definitely close enough, in fact, almost got run over a few times. My apologies to the riders if I seemed like I way as you drove your bikes across the beach. 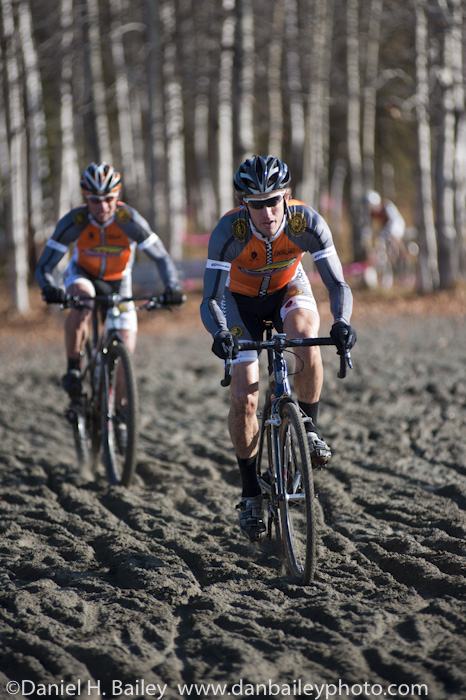 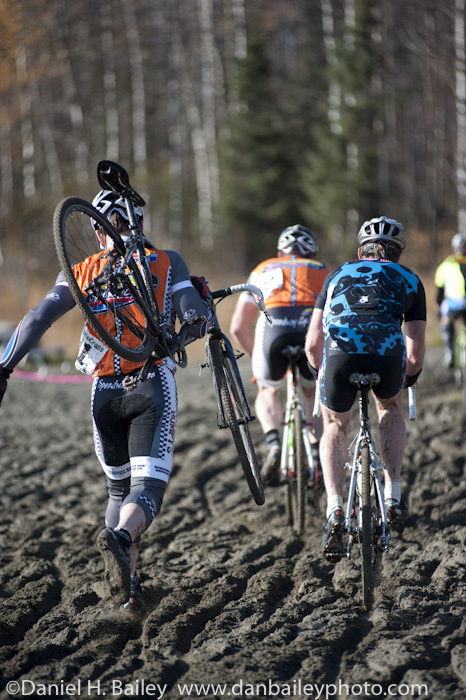 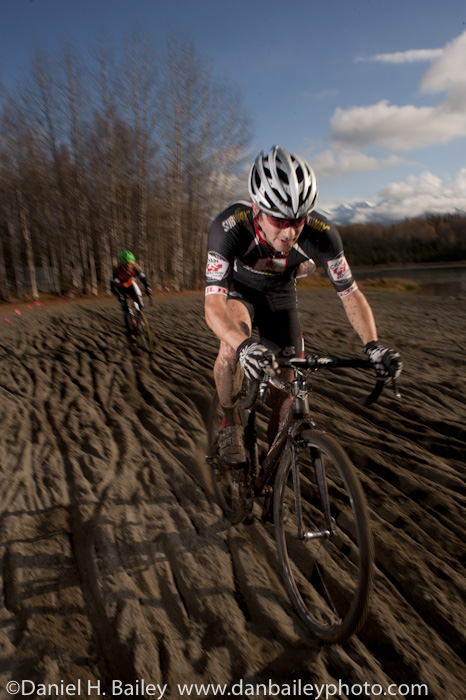 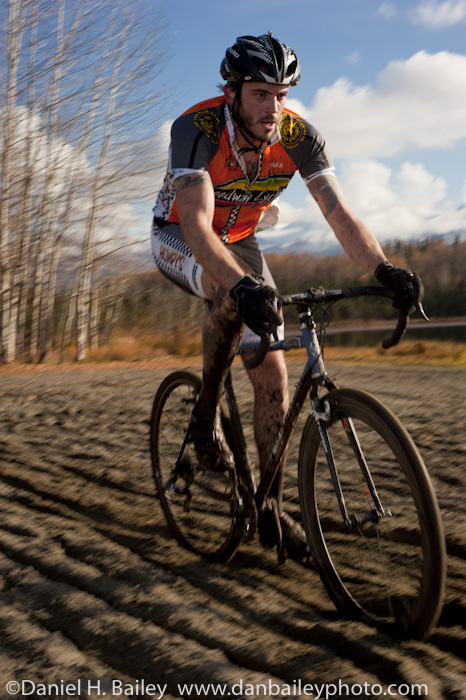 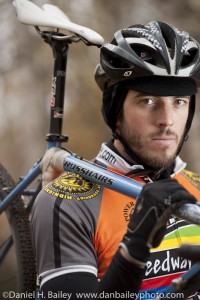 It’s Cyclocross season, everyone, so let’s get ready to ride!! Or photograph, if you prefer. Pick your poison. Biking hills and tight curves is way fun, but it’s also a great sport to hit with the camera; lots of options … END_OF_DOCUMENT_TOKEN_TO_BE_REPLACED 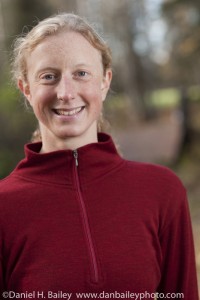 We moved to a new neighborhood this past summer and so I’ve been discovering the expanse of trails that wind through hilly forests just a few blocks away. It’s like having my own outdoor studio right near the house! Did … END_OF_DOCUMENT_TOKEN_TO_BE_REPLACED