Here are a few teaser shots from my recent ski trip to the Selkirk Mountains of British Columbia, Canada. We had five feet of snow fall on us over the course of seven days, which of course meant endless big powder turns and some VERY DEEP conditions! 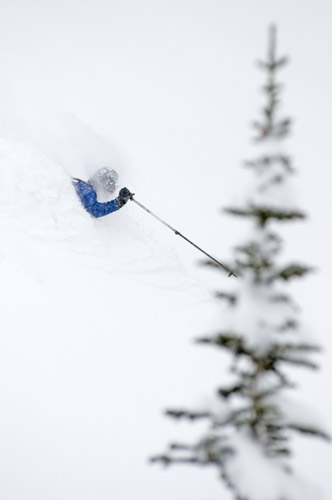 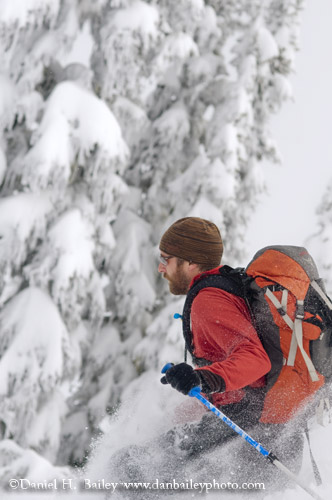 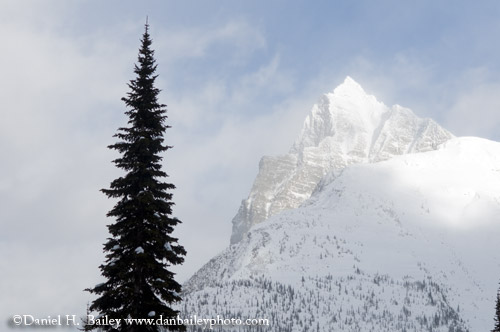 I used my new Nikon D300 exclusively during the trip with excellent results. The D300 picks up right where the D200 left off, as a rugged, dependable, professional quality camera that is well suited to action and adventure photography. The D300’s new 51 area 3D focus tracking worked well locking onto skiers at 6 frames per second, giving me the ability to shoot impressive bursts of photos, such as the series of 18 shots below. 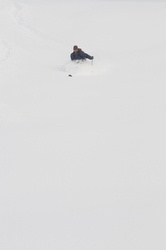 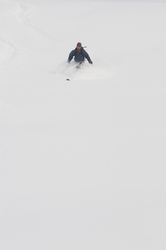 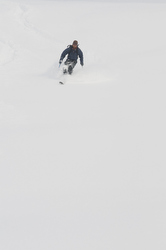 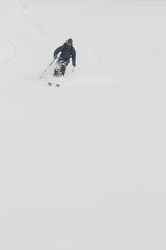 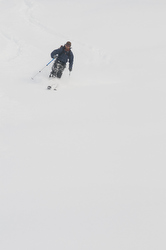 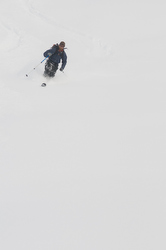 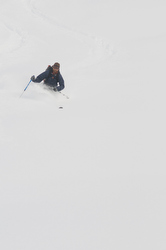 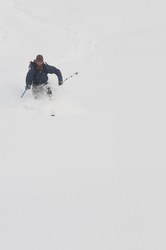 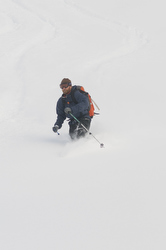 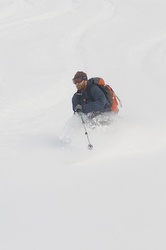 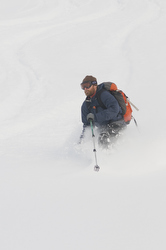 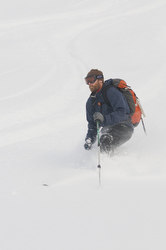 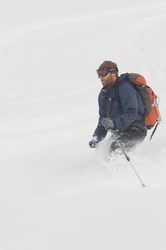 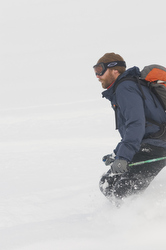 During the beginning of March, I accompanied two hardcore Fort Collins, Colorado skiers, Heath Mackay and Brian Gardel on a week long backcountry ski expedition to Rogers Pass, British Columbia. The highest point on the Trans-Canada Highway, Rogers Pass lies in the heart of the Selkirk Mountains on the edge of Glacier National park, between Golden and Revelstoke, which is where many of the well known heli guiding services are based. Home to the world’s largest mobile avalanche control system, (the area is maintained with heavy artillery by the Canadian Army), Roger’s Pass hosts excellent backcountry and glacier ski opportunities for expert and experienced skiers and mountaineers.

Put simply, the terrain is enormous, the views are spectacular, the approaches are long, the runs are endless and the powder is deep. However, the weather can also by incredibly nasty, the avalanche danger can be terrifyingly high, the descents can be exhasuting, the snow conditions can be awful, and the winter days can be very short. In other words, true backcountry in all forms.

We spent nearly half of our week, on the Asulkan Glacier, staying at the Asulkan Hut and spent three good weather days making two-thousand foot ski runs on the Seven Steps to Paradise and on the terrain below Asulkan Pass. Another blue sky day was spent skinning over five-thousand feet in elevation gain up to the base of Terminal Peak on the Illicillewaet Glacier. As is typical for the Canadian Rockies, though, the weather did not last and three days were spent skiing in marginal snow, sometimes in near whiteout contitions, with one day cut short by the scary sound of slides coming down around us.

Photographing a trip such as this holds special challenges. Aside from having to carry the extra weight of camera gear (I typcally skied with a Nikon D200 digital camera body and three or four lenses, plus memory cards and spare batteries), metering in the intense white snowy environment can be tricky. Fortunately, the D200’s 1,005 segment, 3D Color Matrix exposure meter and digital image processor are incredibly accurate, and gave good results nearly every time. As any ski photographer knows, the sheer speed and dynamics of the sport makes it difficult to capture good ski photos, and combined with everyones’ desire to spend more time making turns and less time photographing, shooting skiing is never easy, but I think that we did an excellent job balancing the two elements.

Overall, the trip was a great success. I’m very pleased with the images that I recorded during the week, and I’m glad to have spent seven days making incredible turns in such an amazing location with two great people. I also continue to be impressed and amazed by the capabilites and results of the D200. Image quality is excellent, its electronics and processing are top notch and it’s easily the most rugged and best ergonomically designed camera body that I have ever used. It has performed flawlessly for me in every condition and has prooved to be an invaluable tool with which to practice my craft.

2008 Edit: Here are some images from a more recent backcountry ski trip I took to Roger’s Pass the next year.