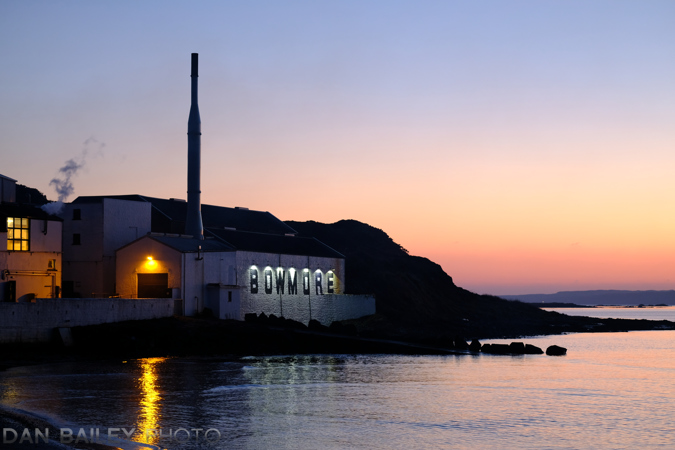 The highlight of my most recent Scotland trip was a week spent on the Isle of Islay. Pronounced “Eye-la,” with the syllabic emphasis on “eye,” Islay is part of the Southern, Hebrides, a chain of islands off the west coast of the Scottish mainland. The southern tip of Islay sits just 25 miles north of Ballycastle, Ireland.

Islay is famous for it’s fine Scotch whisky, specifically, the smoky peaty stuff. There are eight distilleries on Islay, most of which are known for producing the most heavily peated whisky known to man. It’s the home of whiskies such as Laphroaig, Lagavulin, Ardbeg, and Bowmore. If you’ve every had a sip of scotch that takes like a campfire, chances are it was made on Islay. 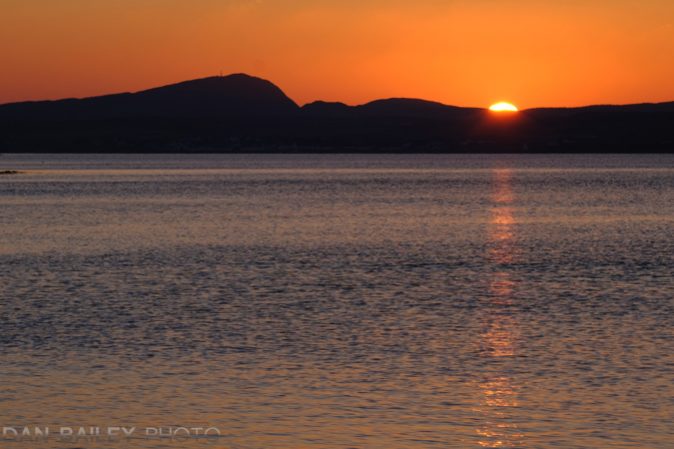 After my super fun hike up Beinn Sgulaird near the town of Oban, we caught the Sunday afternoon ferry to Islay, landing in Port Askaig, and made our way to the small town of Bowmore.

Situated on the western shores of Loch Indaal, Bowmore, (pronounced with the emphasis on “more”, from the Gaelic Bogh Mor, meaning “big rock,” or “big sea rock”) is home to the one of the oldest single malt distilleries in all of Scotland.

Established in 1779, it’s still one of the only distilleries that spreads malted barley on the floor in their malt barn, turning it by hand every few hours before kiln-drying it right there on site. Most distilleries buy and ship in barley that’s already been malted and dried to their specifications. To meet demand, even those distilleries who do floor maltings still ship in some of their malted barley, as they simply don’t have enough floor space. 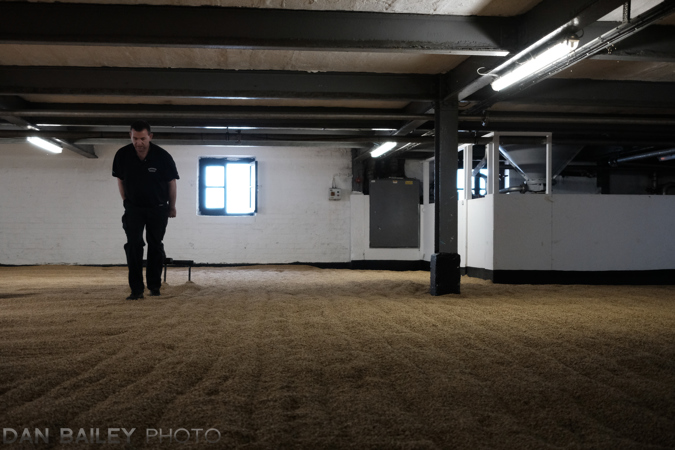 I seem to have a fascination for gold-colored, traditionally produced, old world liquids. Exactly fifteen years previous, I did a solo cycling tour in southern Spain that was driven by my love of good olive oil. As I pedaled around Andalucía, I discovered Spanish Sherry. Given that many of the Scottish distilleries mature much of their whisky in old sherry casks, I felt like this trip was a serendipitous throwback to that memorable cycling adventure.

In fact, I had a sip of one particular whisky during my Islay trip that was matured in Manzanilla sherry barrels, and when I brought the glass up and took the first sniff, I was instantly transported to the sunny seaside town of Cádiz, Spain, where I remember sipping glasses of cool, dry fino sherry in tapas bars back in February of 2003. That was a very special year for me. Here’s one of my old Cádiz photos from way back when. 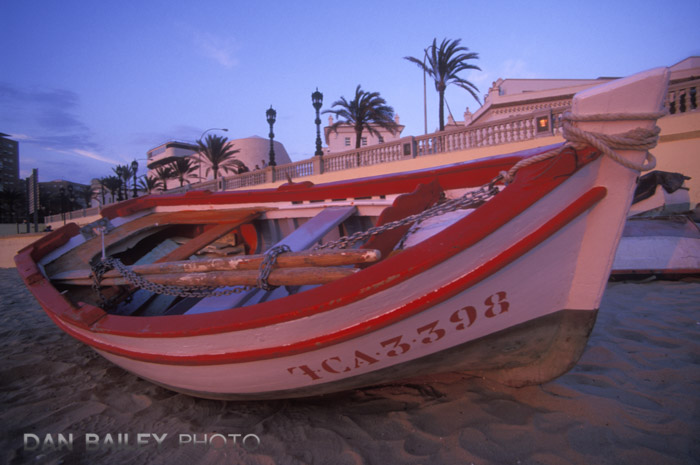 Flashback to the town of Cádiz, Spain. Shot on Velvia film back in Feb, 2003.

Anyway, back to Islay. We arrived in Bowmore with enough time to check into our quaint little hotel, the delightful Harbour Inn and then head outside to catch a few sunset photos along the shores of town. The Harbour Inn is actually owned by the Bowmore distillery.

They also have some wonderful cottages, which I was really hoping to get, but unfortunately, those were all booked, as I’m sure they often are, months in advance.

Whereas I usually just wing it when I travel, and find places to stay or camp right there at the end of each day, this was a short trip, so I made reservations before heading to Islay. Plus, it was my 50th birthday trip, so I treated myself to enjoy this one in style.

We had a few cloud afternoons during our week on Islay, but as luck would have it, we were fortunate to have a rich, colorful sunset on our fist evening in Bowmore. All of these were made with my Fujifilm X-T2 and XF50-140mm f/2.8 zoom lens.

I don’t often take the 50-140 with me when I travel, and I never take it on bike trips, so it was a nice addition to have this lens along with me. After all, it’s a fast workhorse zoom with incredibly sharp glass and great image stabilization capabilities. The last photo in black and white shows that off, I shot that one handheld at 1/13 sec. 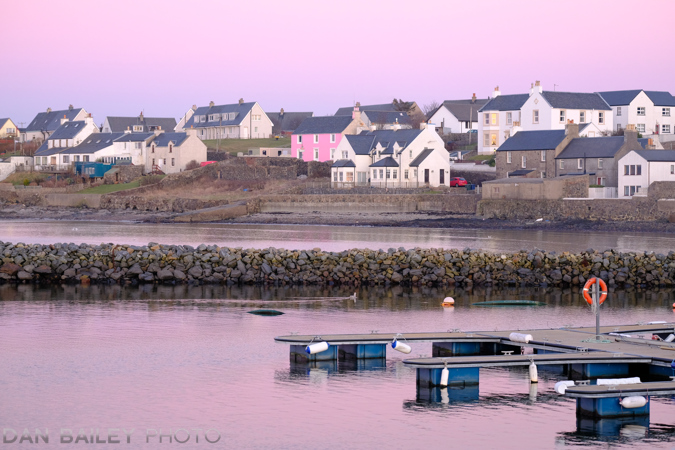 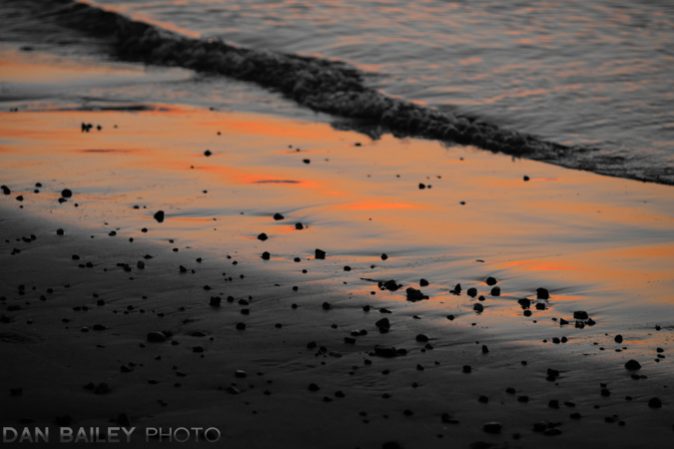 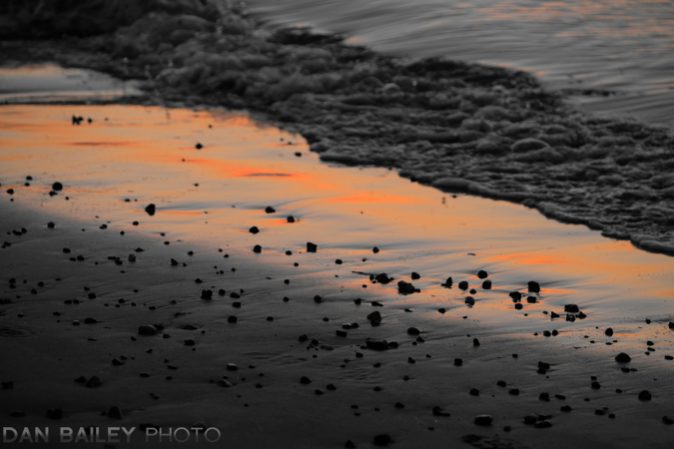 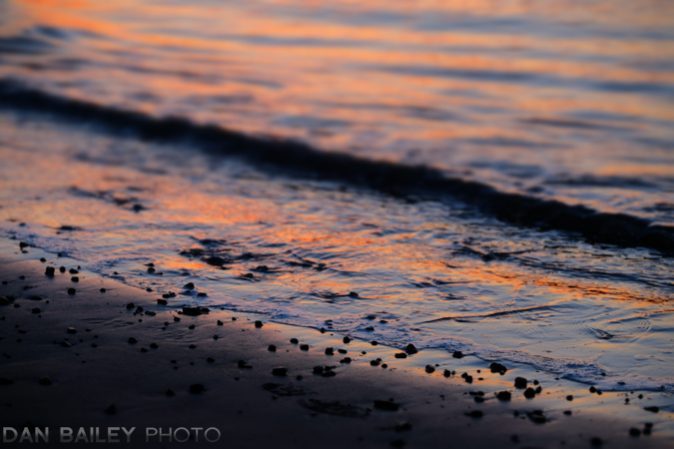 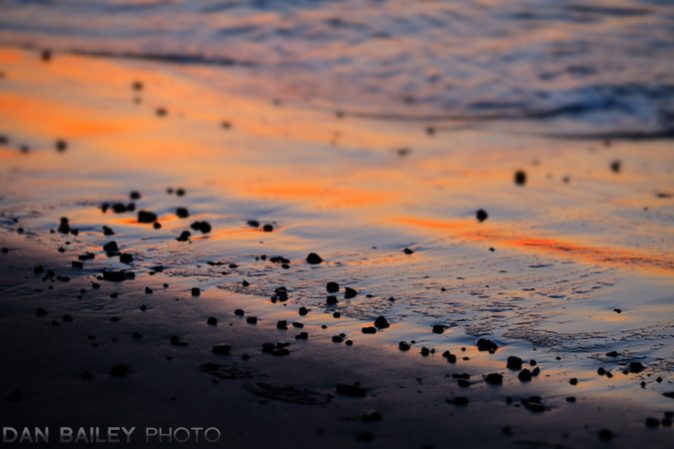 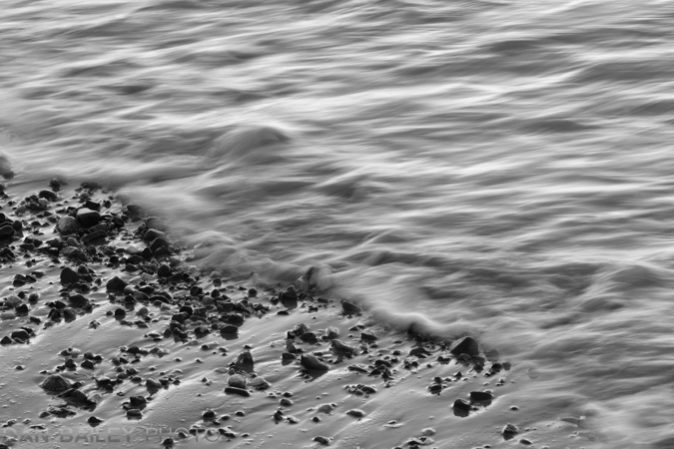 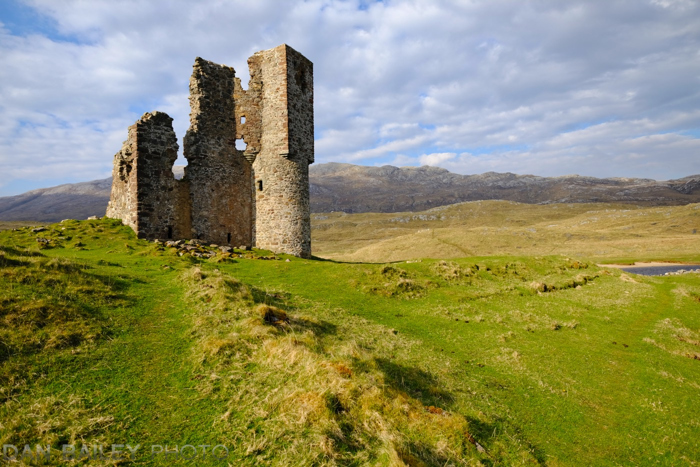 I just spent 3 weeks traveling around Scotland on my bike, and now that I’m back home sitting at my desk, I wish I were still over there, pedaling around The Highlands in the wind, listening to everyone’s accent and thinking about my next glass of whisky. Isn’t how it always goes when you return from a really cool trip?

Of course, with about three thousand new photos to edit, I’ll at least be busy looking at pictures of Scotland for quite awhile, so that will help keep the mood alive. The 6 small bottles of scotch that I brought home in my bike bags will help too. 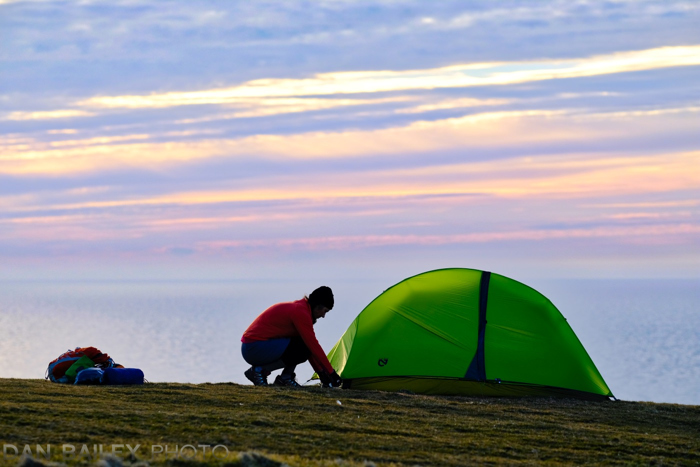 Camping at the edge of the world.

I’m excited to share my images and stories from the trip with you, but it will take a wee bit of time to sift through my photos and write some articles. I plan to do a number of blog posts about different aspects of my adventure during the next few weeks, and I even have a really cool idea for a travel photography eBook as well.

I’ve been posting occasionally on Twitter and Instagram during the past few weeks, but I haven’t put anything up here on the blog since I left. If you’re a regular reader, hopefully that’s given you some time to catch up on all my recent articles. 🙂

I’ll just present a handful of photos right now, just to whet your appetite and get you psyched for what’s to come. Enjoy!

Also, FYI- I’ll be heading down to Austin and Seattle to give presentations in the next couple of weeks.

On Friday and Saturday, June 2-3, I’ll be speaking at the Precision Camera Photo and Video Expo in Austin and hanging out at the Fuji booth. Rumor has it that I’ll even have a GFX for people to check out.

On June 10-11, I’ll be speaking at Glazer’s Photofest in Seattle and hanging out with the Fuji reps at the booth. If you’ll be in either of those places, come by and say hi! 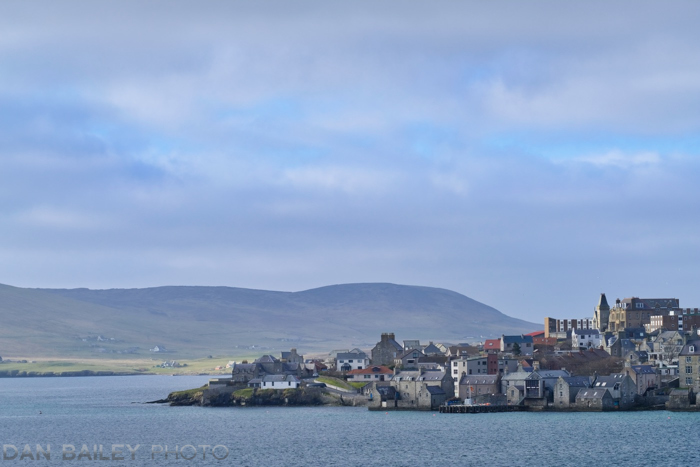 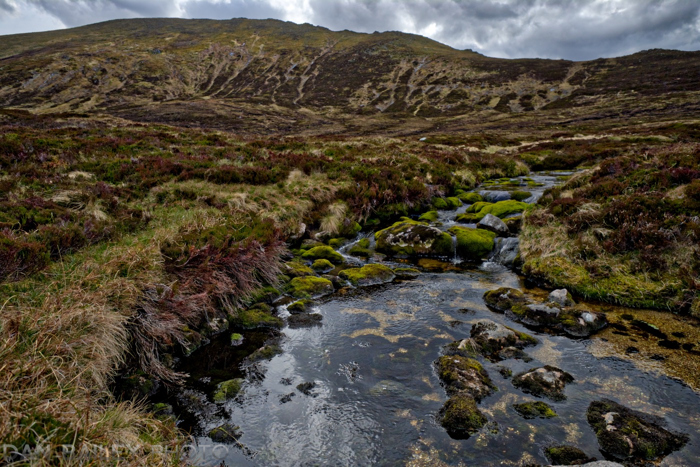 The Cairngorm Mountains of Scotland 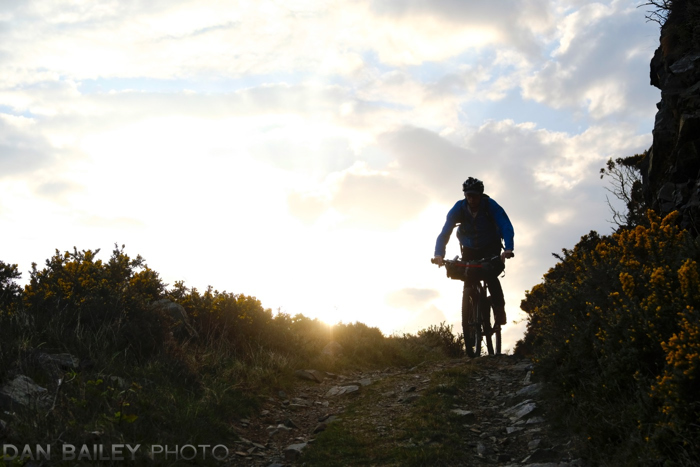 Bikepacking in the Scottish Highlands

BIKEPACKING IN ROMANIA by Dan Bailey on Exposure

Last fall, I did a 6-week bikepacking trip in Romania. We spent most of our time exploring and riding around the backroads of Transylvania, pedaling village to village through a wonderful and diverse landscape.

Read BIKEPACKING in ROMANIA: Chasing Vampires and Adventure in Transylvania, see some of my favorite photos from this trip and learn more about this fascinating and remote part of the world.

I posted the story on my adventure mini-site, adventures.danbaileyphoto.com. This site is designed to offer a clean, bold presentation and a simple design. As much as I love writing about my adventures here, there are some topics I feel require this treatment for maximum visual impact.

I knew very little about this part of the world before I went over there, aside from the legends and fiction we’ve all seen in classic Dracula movies. However, I during our bike tour, I learned that Romania, and especially the northern region of Transylvania are filled with incredible scenery, rich culture and history, diverse geography and very friendly people.

Check out the story here, and subscribe to be notified when I post future adventure photo essays. 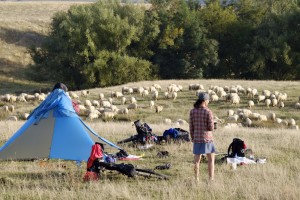 If there ever was an awesome destination for an extended mountain bike tour, it’s Romania. Having ridden in a number of different countries, I’m blown away by what Romania has to offer the adventuring cyclist. I’ve been looking forward to … END_OF_DOCUMENT_TOKEN_TO_BE_REPLACED 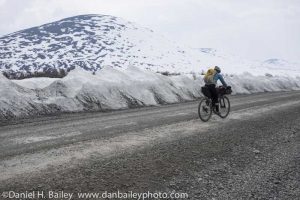 The Fargo Last Thursday, I went to the bike store and test rode a new Salsa Fargo, bought one, then threw it in my truck and immediately took it on a 235-mile bikepacking tour of the Denali Highway, where I … END_OF_DOCUMENT_TOKEN_TO_BE_REPLACED 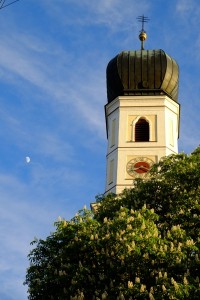 After some breathtaking aerial views of pink light hitting the massive glaciers Greenland and a quick layover in Iceland, we made it to Munich with bikes intact. Here are a few photos of Munich and the tiny town of Waal, … END_OF_DOCUMENT_TOKEN_TO_BE_REPLACED 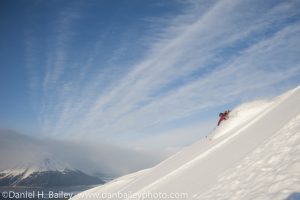 Last week, three friends from Colorado came up to join me for a good old fashioned Alaska backcountry ski trip. (Two of the three are the same friends I skied in the Canadian Rockies with a few years ago.) We’d … END_OF_DOCUMENT_TOKEN_TO_BE_REPLACED