A View of Slioch in the Scottish Highlands 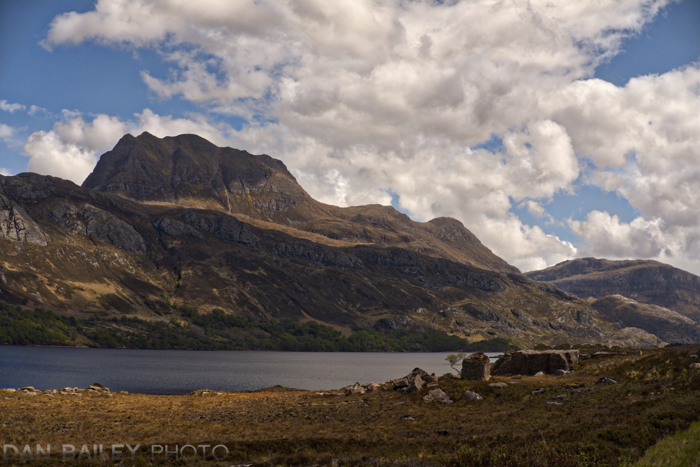 I’ve been back from Scotland for over two months now, and I realized that I’ve only share shared a few images from that trip here on the blog. That’s patly due to the fact that my posting frequency dropped quite a bit in June and July for obvious reasons, and also because most of my writing time this summer was spent working on my new comprehensive Fujifilm guide, X SERIES UNLIMITED.

So, today I’d like to share one of my favorite landscape images from my 3-week bikepacking adventure, a view of Slioch towering over Loch Maree in the Scottish Highlands.

At 981 meters (3,218 feet), Slioch is one of the most impressive mountains in the North West Highlands. Located near the village of Kinloweche in the region known as Wester Ross, Slioch stands alone, isolated from other similarly sized peaks, which gives it special prominence.

It’s name derives from the Gaelic word, Sleaghach, which means “spear,” and when viewed from the west,  the top of Slioch definitely as a dramatic, slender point.

We had a nice, long view of Slioch while pedaling along the 12-km long Loch Maree. We had left the small town of Gairloch that morning, under clearing skies after a solid night of rain. After climbing southeast away from the coast, we crested a long hill right by Loch Bad an Sgalaig, and began a long and relatively straight pedal alongside Loch Maree.

The scenery changed dramatically as we rode towards the loch and very quickly, Slioc came into view. Sitting at the southern end of Loch Maree, we drank in its impressive form for well over a half-hour.

When you’re on the move, even on a bicycle, the scenery can sometimes change pretty quickly. With their wide open views and majestic vistas, features in the Highlands tend to hold your attention for much longer period of time.

I had no idea what this beautiful mountain was called, but fortunately, the little cafe/gas station in the village of Kinloweche had a map on the wall, so I was able to learn the name, which was quite easy to commit to memory. 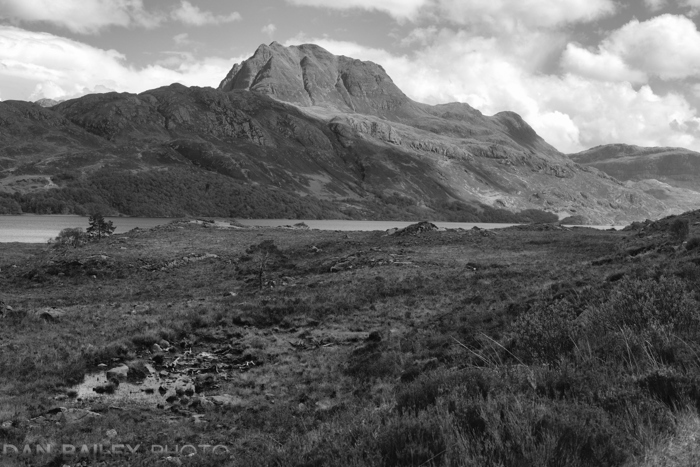 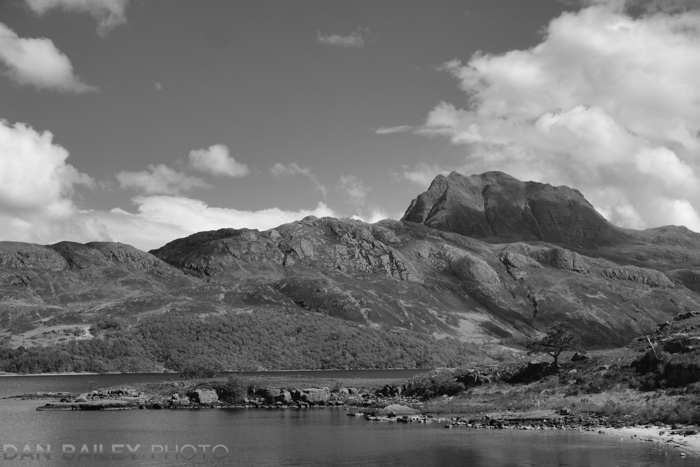 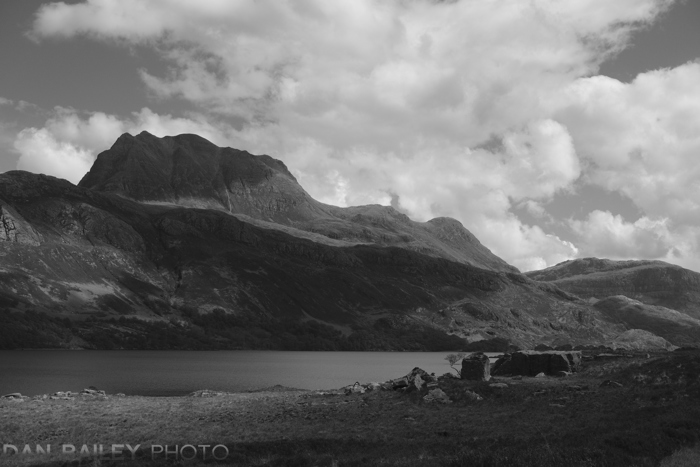 My Slioch photo actually started as a black and white. Being mid day, the light wasn’t particularly impressive, so I set my Fuji X-T2 to the ACROS film simulation, using the RED FILTER setting to add more drama to the skies. I felt that a monochrome image might help capture the peak with a timeless, yet captivating simplicity.

I had stopped a few times to shoot the mountain as I rode alongside the loch. Eventually, as we got closer, I found a very pleasing vantage point that let me balance the prominence of the peak with the small jumble of boulders in the lower right foreground.

In addition, the light hit in such a way to light up the foreground on the lower left side of the frame, and at the same time, shrouded part of the mountain in shadow. I felt this added much greater depth to the scene, instead of just having everything being lit by the  same level of sunlight.

Even though I liked the initial black and white look, I set the Fuji to shoot RAW+JPEG. I wanted to give myself options for processing the photo later, in case I came up with what I felt might be a more compelling idea. I don’t always like to defer my creative ideas until later, but sometimes even I break my own rules, especially if I’m moving quickly through a scene.

This this. As soon as we rounded the southern end of Loch Maree and dropped into the forest before Kinloweche, Slioch disappeared from our sight, and I haven’t seen it since.

The Slioch frame became embedded on my memory card with a few thousand other shots until I downloaded the card few weeks later when I was back in Anchorage.

Here’s what the unedited RAW version looked like before I did anything. As you can see, it’s pretty dull. I still liked the black and white ACROS version, but I really wanted to see if I could make this image something special.

Opening the image in Luminar, which is my image editing program of choice these days, I started previewing some of the presets to see if anything popped out. I demoed a few different ones, like Image Enhancer, Vivid, Sharp and Crisp and even one called Artistic Copper Strong.

There was something about the Artistic Copper preset that drew me in. It contains some interesting tools, including a Split Color Warmth effect, which selectively enhances warm and cool colors, almost as if you were adding a very subtle split toning look.

I liked how it warmed up the landscape a little bit without comprising the daylight blue of the sky. Further enhancing this effect, I slid the Color Temperature slider up towards the yellow spectrum, and then added some Clarity, Saturation and Structure, as well as a twinge of Grain and finished if off with a touch of magic using the Luminar’s Golden Hour Filter.

So, although I didn’t end up using the Artistic Copper preset, it helped spark some creative ideas and put me on the path towards my final image.

I really like the end result. It’s got some much needed life and extra detail, but it’s not over done. The colors are rich, without being too saturated, and at the same time the overall color palette is relatively subtle compared to what it might have looked like if I used the Velvia film simulation.

I’ll confess, I don’t often spend much time processing my images. That’s one of the things I love so much about Luminar, if you want to work quickly, you can achieve good results with minimal time. Although it may sound like I made a lot of adjustments on this image, it really didn’t take much time to go from a flat RAW file to a finished image that I love.

If you’ve read my blog or eBooks, you know that I usually shoot my Fuji as if I were shooting film. I like to gauge my scene, pick a look or film simulation that matches my creative vision at the time and walk away with the shot I want, as opposed to shooting everything in RAW and processing later.

Well sometimes, even I like to shake it up. That’s the beauty of digital photography, you can approach it however you want. There will be situations where a particular scene inspires you to process and try create a special, representational photograph, while other times, you just want shoot and go, and let the camera do your processing.

Neither way is better. It’s all about how YOU want to spend your time and exercise your creativity. If you’re interested in checking out Luminar, you can download the demo here. If you like what you see, you can use discount code DANBAILEY to save $10 on the program. 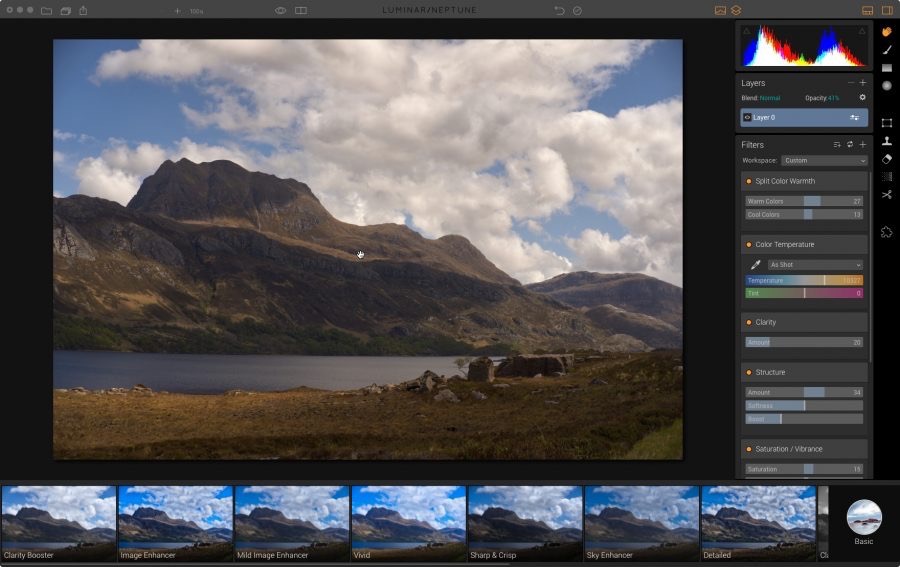