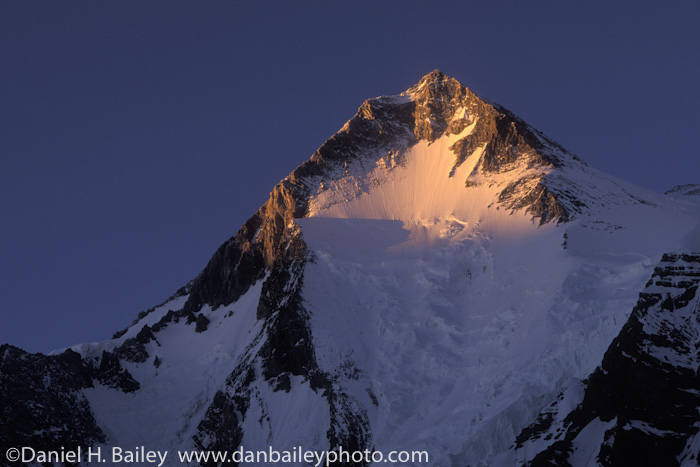 Alpenglow on the summit of Gasherbrum I, 8,068 M, Baltoro Glacier, Karakoram Himalayas, Pakistan

I licensed this image to a client for stock usage yesterday. It was one of those perfect sales; where they called with the request, I had the exact shot they needed for their project, we agreed on a price, and I delivered the hi-res file and the invoice, all within about two hours.

I shot this photo in 1994 during my trek to the Baltoro Glacier in the Karakoram Himalayas of Pakistan. It just goes to show you that photos in the archive still sell.

Also called Hidden Peak, Gasherbrum 1 (26,470 feet) is the 11th highest mountain in the world. Lying on the Pakistan-China border on the Baltoro Glacier. It was originally designated as K5 during the Great Trigonometric Survey of India in 1892, and it was first climbed in July 5, 1958 by Pete Schoening and Andy Kauffman as part of an American expedition.

The name, Gasherbrum means “beautiful mountain” in Balti, which is the language of the people who live in the region of Northwest Pakistan known as Baltistan.