My 5 Favorite Photos From The Past Week

I see each week as a chance to practice new camera techniques and improve as a photographer. Even if you only shoot a small handful of photos during the course of a week, every time you pick it up, you’re giving yourself a new opportunity to learn something, whether you try out a new tip, or notice a different aspect about the light or your subject matter.

In the end, this is what makes you a better shooter. Putting the camera into your hands on a regular basis will lead to increased confidence, efficiency and skill.

Plus, it’s fun to look back on a week and see what you did by gauging the photos you shot. Here’s a collection of my 5 favorite images from the past week. Enjoy, and if you have links to your favorites from the past week, post them in the comment section.

1. Floating on Top of the Snow. 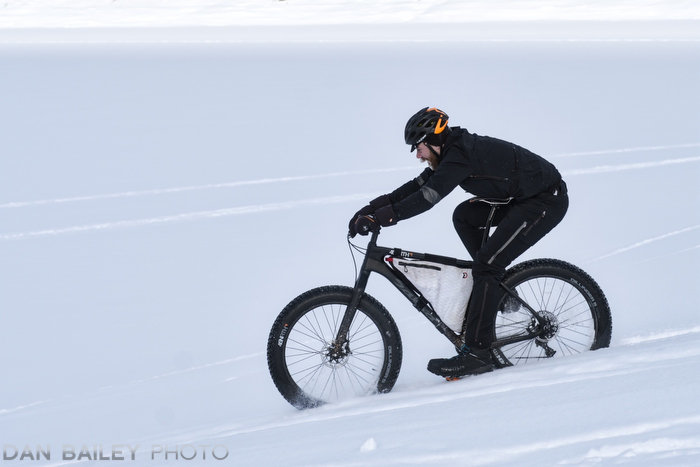 Here’s my friend Kurt Barclay from 45NRTH enjoying some fresh powder on his fat bike. I shot this with my Fujifilm X-T2 and the XF90mm f/2 lens and processed the photo with Luminar, using the “Enigmatic Vision” preset, dialed down to about 20%. I like the way this setting softened the snowy background just a little bit, and I think it helps Kurt stand out with added prominence in the shot.

Just so you know, if you’ve never ridden a fat bike in the snow, you can’t really ride on top of fresh powder. You need some kind of a base, whether it’s an underlying layer of compacted now, ice, or a snow machine (snowmobile) track. If you suddenly find yourself with no base underneath, you’ll sink right in… 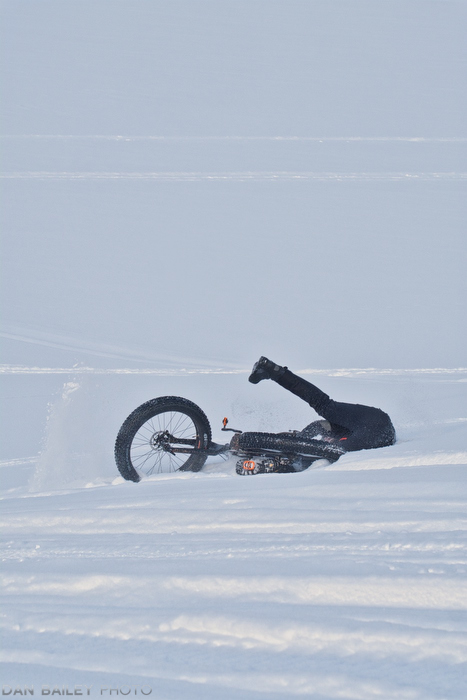 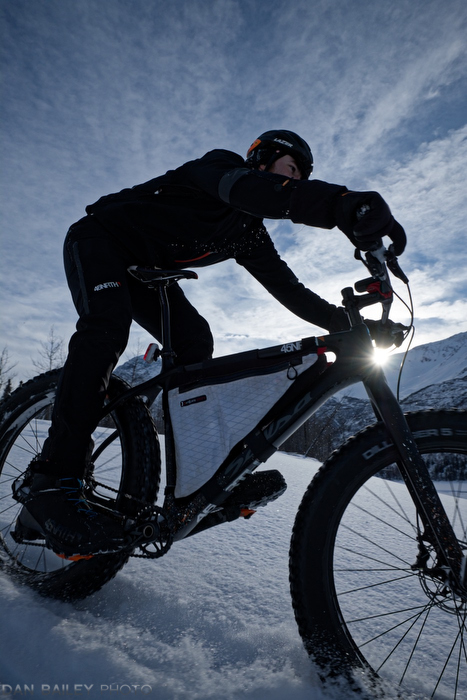 Here’s another shot of my friend Kurt, this time captured with the XF14mm f/2.8 ultra wide angle lens. I LOVE the 14, it’s one of my favorite of all the Fuji lenses. Being a huge fan of wide glass, I love being able to get very close to my subjects and create that “right in the middle of the action” feel to the image. (Here’s my full review of the Fuji14mm lens.)

This photo was also processed with Luminar, this time using the “Image Enhancer” preset, which I dialed down to about 20%. This seems to be the magic number for me when using the presets in Luminar. The adjustment helped bring out the detail in the clouds, while lightening up the blacks and the shadows on Kurt’s face. 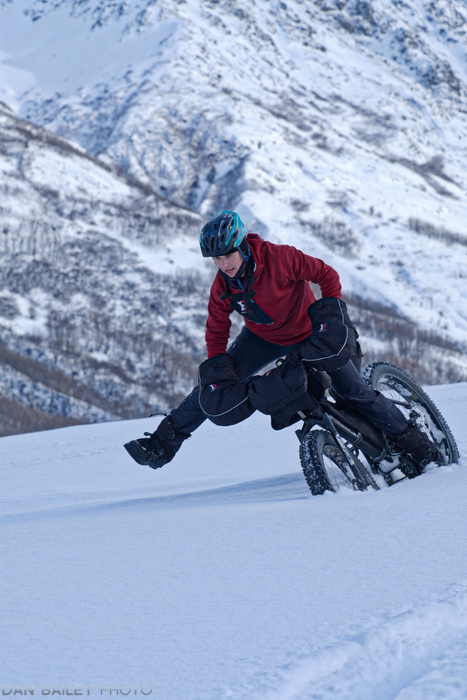 This is Amy making her own line through the powder. She hit a soft spot and… we’ll, you know what comes next, don’t you?! Sometimes it’s all about the moment. I also shot this one with the X-T2 and the XF90mm f/2 lens. 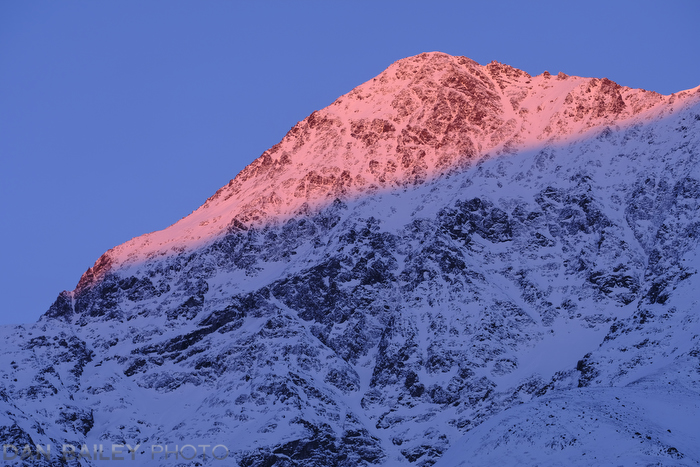 During the end of the day, we were riding back from the other side of the Eklunta Lake trail, when a dramatic display of pink light hit the surrounding peaks. At the time, we were still in the trees, and pedaling furiously, hoping to break out into an open area before the light faded so we could take some photos of the sunset.

Right as we hit a clearing, we caught the best light hitting a little 5,640′ bump called Nujukena Point. Hopping off the bike, I slapped on the XF90mm f/2 lens and got this shot above. It’s a straight JPEG using the Velvia film sim on the X-T2. You can never go wrong with Velvia at sunset! 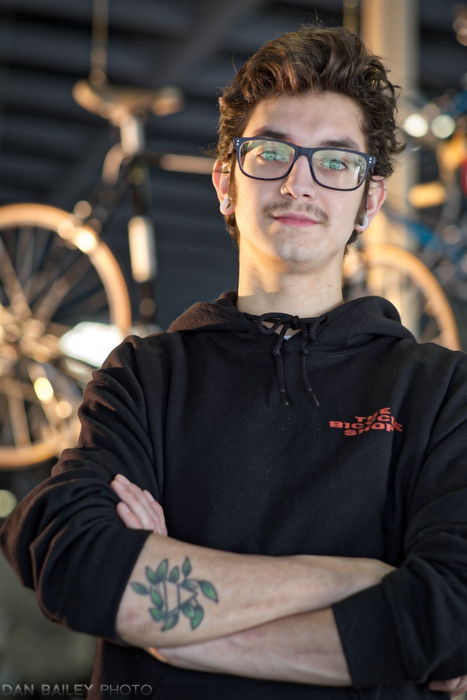 I sponsor and ride with the The Bicycle Shop team here in Anchorage, so this week, I shot staff portraits of the people who work at the two stores. Here’s a photo of Zac. Younger, short Zac, not to be confused with older, taller Zac, who also works there.

The Bicycle Shop has been a mainstay of Anchorage for over 50 years. Started in 1964, the store has seen a lot of history, and of course, throughout the early years, they sold tons of Schwinn bikes. (My next door neighbor bought a Schwinn Varsity there back in the 70s.) To honor their legacy, the Dimond Road location has a bunch of classic Schwinns hanging from the ceiling.

I wanted to feature this in my portrait of Zac and show the old and the young, so I used the X-T2 and the super awesome Fuji XF56mm f/1.2 lens, which is ideal for portraits.

To light Zac up close, I used a Nikon SB-800 flash inside a Photoflex HalfDome softbox, and a second bare bulb flash with an orange CTO gel about 20 feet behind an to the left to light the bike also as an accent light on Zac. I used a long zoom setting on the flash to throw a blast of hard, direct light to give the shot more excitement.

I triggered the flashes using a trio of PocketWizards- one on the camera, and one on each flash. To do a shot like this, you could use just about any kind of radio trigger, including the affordable PocketWizard PlusX models, the even more affordable Cactus v.5 triggers, (they also come in a set of 2).

If you’re a Nikon shooter, you could use the SU-800 Wireless Speedlight Commander, which is an awesome piece of gear if you shoot a lot of flash inside. Read my review of the Nikon SU-800 here.

Ok that wraps up this episode. I hope you have a great week!