Size, weight and packability are always issues for outdoor and travel photographers. Some people choose to leave their digital SLRs behind in favor of point-and-shoot or high-end compact camera, even though that means compromised image quality and performance.

Working pros usually suck it up and pack their digital SLR gear, maybe compromising on the lenses they carry. But when you make your living with your camera, you can’t really compromise on image quality. Now, there’s an alternative for photographers who want DSLR performance in a smaller package.

The compact system camera movement began in the fall of 2008 with the introduction of the first Micro Four Thirds camera. The Panasonic Lumix G1 was a ten-megapixel camera with an electronic viewfinder (EVF) and tilt-swivel LCD display. The Panasonic and Olympus Micro Four Thirds cameras are about the size of a Canon G-Series compact but that’s where the similarity ends.

A few months later, in the spring of 2009, Samsung introduced an EVIL camera, the 14-megapixel NX10, as well as their own line of Samsung NX lenses. The APS-C sensor is about 60% larger than the Four Thirds sensors used in the Panasonic and Olympus Micro Four Thirds cameras so the Samsung NX cameras should have even better image quality. As I write this, there are two Samsung NX cameras available, the NX10 and the NX100, both of which have 720p video as well as still shooting. 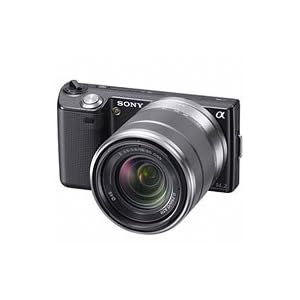 Last year, Sony joined the EVIL camera party with the NEX-3 and NEX-5, arguably the most innovative of the compact system camera designs. The Sony Alpha NEX cameras are currently the smallest of all the EVIL cameras and look sort of like a lens mounted on a smart phone. They use a 14-megapixel Sony Exmor APS-C CMOS sensor developed specifically to support still and video capture in the NEX cameras and Sony Alpha digital SLRs.

All three of these camera systems represent a smaller, lighter alternative to digital SLRs. Because the lenses are also smaller, a multi-lens camera kit could be easier to fit in a pack or travel with than a digital SLR with one zoom lens.

Last spring, for the sake of a review, I left my digital SLR at home and took the Olympus E-PL1 Pen camera and two lenses on a vacation to Mazatlan, Mexico. I was able to take one carryon bag for my laptop and all my camera gear instead of the laptop case and bulky camera backpack I usually carry on the plane. The E-PL1 performed great and I had zero regrets about my decision. You can read more about my Mazatlan Micro Four Thirds camera experience in my Olympus E-PL1 Pro Review

If you’re a serious photographer looking for a packable alternative to a digital SLR, I recommend you take a look at the EVIL camera systems. My experience has mostly been with the Olympus Pen Micro Four Thirds cameras so I don’t have strong opinions about the other options or about which system is best. However, I have been hearing very good things about the Sony NEX-5 and it’s at the top of my list of cameras to test next.

Photo-John is John Shafer, Managing Editor of PhotographyREVIEW.com since 1999 and a sometimes published, totally addicted mountain bike and ski photographer.