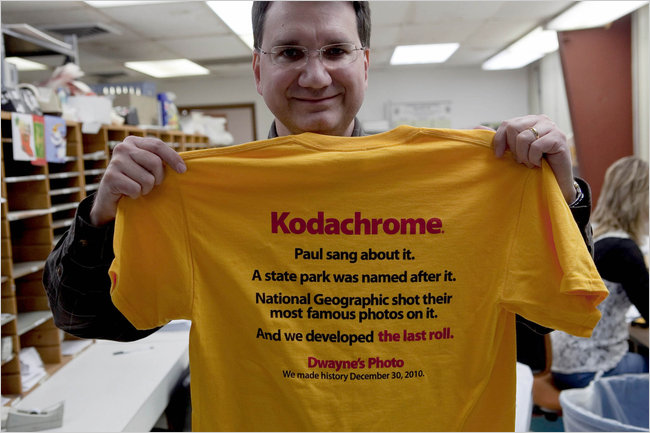 The Last Roll of Kodachrome Ever Will be Processed Today at Dwayne's Lab in Parsons, Kansas. Photo by Steve Herbert for The New York Times

There’s something sad about finality.

We don’t want it, especially when it involves something that we love. Unfortunately, though, whether we want it or not, everything eventually ends. When that finality comes, we look back with nostalgia and remember, usually with a tear in our eye.

Today, the very last roll of Kodachrome ever will be processed at Dwayne’s Photo Lab in Parsons, Kansas. After that, the machine will be disassembled and sold for scrap.

The truth is that we’ve been saying our goodbyes to Kodachrome for some time now. With the emergence of digital imaging, most photographers stopped using slide film years ago. Kodak discontinued the world’s most famous and perhaps best slide film in June of this year, and last year, they stopped making the chemicals needed to develop the film. So, we knew that it was only a matter of time when the last roll would actually be shot and processed by anyone.

Fittingly, after being used by photographers for over a half century to document every corner of the earth and probably most of the people in it, that last roll was exposed by Dwayne Steinle, the man who own’s the only remaining Kodachrome lab in the world. He searched for a film camera that still worked and then shot photos of his family, his house and his town. He’s saving the very last frame for a shot of his employees standing in front of the lab wearing the T-shirts above, which you can order from the lab.

So, like all of you, even after bidding my own fond farewell to Kodachrome back in June, I now say my final goodbye to a wonderful film and to a true and literal golden era that has now come to pass. I might even buy a shirt to help me through the grieving process.

Read the full article about the Dwayne’s Lab and the last roll of Kodachrome in the New York Times.