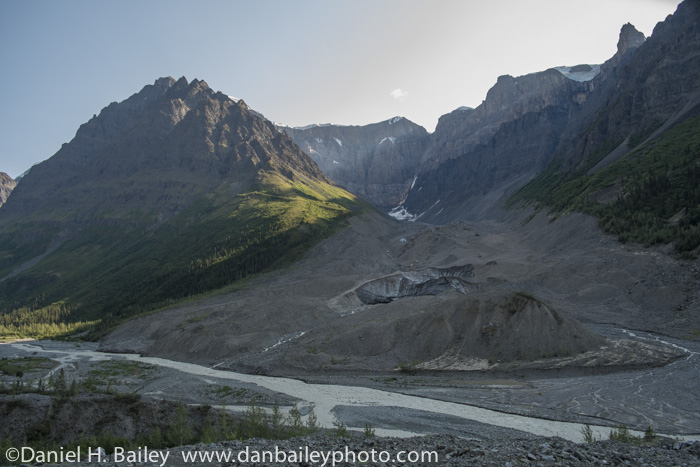 Radovan Gulch, on the south side of Glacier Creek

In 1908, a young Croatian immigrant named Martin Radovan (changed from Radovanovich at Ellis Island), arrived in Cordova, Alaska with thousands of other workers to help construct the Copper River & Northwestern Railway line. Backed by J.P. Morgan and the Guggenheim brothers, the railway was built to support the huge copper boom at the Kennecott mine near the town of present day McCarthy.

After completion in 1911, Martin stayed in Alaska and worked a number of mining related jobs in the area before prospecting for copper in some of the creeks in the Nizina river mining district east of McCarthy. In 1929, he laid a number of claims in a side canyon on the south side of Glacier Creek, a tributary of the Chitistone River.

Convinced that a massive copper deposit lay in the contact zone between the limestone and greenstone layers high on the walls of the cirque, Martin spent the next 40 years carefully and meticulously scrutinizing every inch of the contact zone. For most of this time, he worked the walls completely by himself.

With little technology and no formal mountain training, he spent nearly his entire adult life (into his 80s) skirting along precipitous, sandy ledges that cut along the vertical cliff faces, moving up and down wire and rope ladders that he built to access unclimbable walls and digging tunnels in the rock at elevations of up to 7,000 feet. (The area where Martin spent most of this time lies just above the dark band of rock in the upper right wall of the top photo.)

Martin never did find his dream deposit, but he did built a rich, full life that perfectly illustrates the concept of a rugged Alaska frontiersman. His legacy in the area is so rich that the National Park Service has worked to preserve the record of his life. It’s a fascinating story; I read an entire book about Martin Radovan while staying at the Glacier Creek cabin during my recent Wrangell Mountain flying trip, not even a mile away from where he lived in his own cabin across the river.

I shot this image of Radovan Gulch during a day hike up Glacier Creek with a Fujifilm XE-1 and the XF 18-55mm lens. Although I love how the JPEG files on the Fuji X cameras look, I was faced with some pretty strong and contrasting light here, so I took the photo in RAW. This allowed me to control the extreme highlights that result from the sun spilling over the top of the cliffs against the shadowed, north facing rock walls. Below is the original file without correction to show you the level of contrast that I was dealing with. 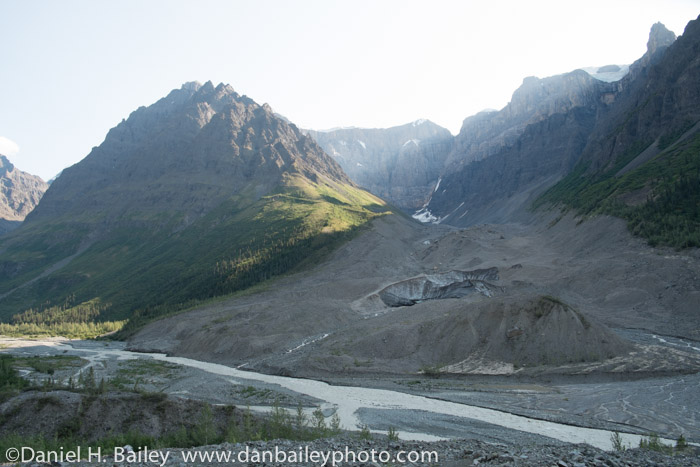