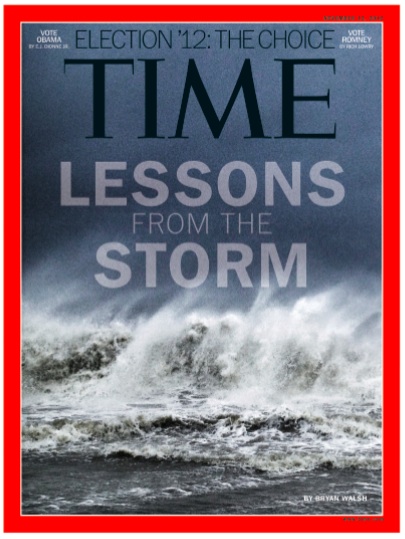 Judging by the outrage in Kenneth Jaracke’s piece, Instagram, The Devil and You and many of the strong comments that follow his post, it’s because a major news magazine has just run a photo on the cover that was shot with *gasp!* here it comes… an iPhone.

To help document Hurricane Sandy in real time, the photo editors at Time Magazine gave five photographers access to its Instagram Feed, and in the resulting coverage, decided to run one of those iPhone shots on the cover.

How could they? Instagram is not for serious journalism, everyone knows that. It’s for people to take pictures of their meals, snap photos of the airplane wing out the window and pretend that they live in an era of grainy, color tinted film again when they really don’t.

Or is it? Here’s where the argument begins.

Or rather the question: What’s the deal with Instagram and iPhoneography anyway? For as much we all (how many billion people?) love taking pictures with our iPhones, there seems to be an incredibly strong advocacy against using them for any serious photography. i.e, journalism.

Of course, this depends on who you ask. The real working photojournalists love shooting with their iPhones because, as Ben Lowry (the guy who landed the Time cover shot) put it, [the]iPhone has allowed me to capture scenes without feeling that I am once again on the job. To “point and shoot” has been a liberating experience.”

In fact, I think that you’d be surprised if you knew how many “news” photos that you see each day were made with iPhones. After all, most news photos are published on the web, which hardly demands DLSR quality. Earlier this year, Sports Illustrated ran 6 pages of spring training Instagram photos by baseball shooter Brad Mangin, and I’ve heard of a few other professional photographer who have either had published iPhone work or who do serious personal projects with their iPhones.

There’s the key word: Professional. It’s not like Time and SI just just grab amateur photos for their magazine covers. Oh wait… Time does do that. In the case of Hurricane Sandy, though, they sourced five reputable professional photojournalists to post real time images of the storm. These guys not hacks, they’re heavyweights in the industry, and if you look through Time’s official Instagram Sandy photo feed, there are actually some pretty good shots in there.

In my mind, Instagram is like the great equalizer of modern day photography. That’s why it’s so cool. Instead of having the unique style of photography revolve around our camera choice, lens collection and software, the iPhone lays us all completely and photographically bare and makes us depend entirely on our creativity.

Think about it. With Instagram, everyone has the same simple lens box and the same little collection of nostalgic filters and borders. With no expensive glass, remote speedlights, battery powered strobes, motor drives, or light modifying tools, it becomes all about what you point it at, how you use the existing light and how/if you “accessorize” your photo with those fun retro style effects and borders that, as my friend Jessica put it, “remind us of the time when our parents were pretty.”

If you ask me, that sounds like the ultimate in personal creative expression, or, as some people like to call it, “art.” With this in mind, it surprises me that pro photographer Kenneth Jaracke has such negative things to say about Instagram. Why does a “fake” border ruin the credibility of a photograph? Why is that any different from the “real” border that you put on framed photos in your house? And when he talks about “noisy digital files,” we can point out that the 8MP camera on the iPhone is way better quality that the the first and second generation of digital cameras that pros used to shoot magazine covers a decade ago.

Keep in mind, that the same things were said about cars, airplanes, guitars, electric guitars, digital recording, art styles, political ideas and just about every other new thing that has ever come about. Doesn’t matter what it is, there will always be detractors. Early critics faulted impressionist paintings for their unfinished appearance and seemingly amateurish quality. When it all comes down, isn’t a photograph just one person’s impression of a certain fleeting moment in time? Who cares how he or she presents it? And why such strong opinions about it? Really people, we’re talking pictures. Not guns, not torture, not gays trying to marry. Pictures.

Of course, in the context of real journalism, we generally demand two things with photography. One is that a publication won’t “fake” a shot and pass if off as real. It’s been done before, usually with much outcry, which is why we probably wouldn’t tolerate a cover photo that uses Instagram filters and retro stylings.

However, Time Magazine’s “Sandy cover” is a straight iPhone photo, actually shot with Hipstamatic and uploaded to Instagram. Mere technicalities. Even though it’s been cropped, it reproduced quite well, and in my mind, the gritty quality of the image doesn’t detract, any more than a grainy black and white would in any other type of photo essay. The job of a journalism photograph is to educate, communicate and convey feel, moment, action, emotion and incident, which hopefully stir up reactionary ideas in the minds of viewers. In the wake of the brutal storm, Ben Lowry’s photo certainly does that.

The other is that no matter what gear is used, or who the photographer is for that matter, we expect that he or she will be fairly compensated for their image. That’s an entirely different argument, though, and we don’t have time to go there today. Next time maybe. I’ll just say that I hope that Ben got paid a big wad of cash for his Time cover photo.

Finally, there’s something else that we seem to like about Instagram. With all the work we have to do shooting, editing, keywording, and archiving our “serious photographs,” sometimes it’s nice to just shoot a photo and be done with it. A few brief moments of fun and creativity and it’s done. We don’t even have to worry about storing the image files on our own hard drives- let Facebook (Instagram’s owner) keep all those extra bytes on their own servers.

iPhone journalism is not going away. It’s here to stay, and we can only expect to see more professional uses of images shot with mobile phones in the future. In some ways, I applaud Time and SI for breaking that ground; in my mind, both did it with journalistic integrity and set a good standard for others to follow.

I KNOW that you have an opinion on this, so don’t be shy, leave a comment and let me know what your take is on these issues. Let’s have a discussion.