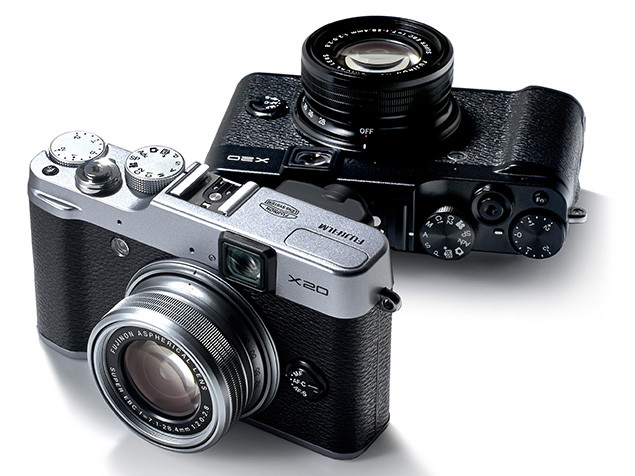 As expected, on Monday at the Consumer Electronics Show, Fujifilm announced the X20 compact camera. Retaining the same body style, the same 28-112 f/2.0-2.8 lens and the same megapixel count, as well as many of the specs which made the X10 such a capable and popular little camera, the X20 features a upgraded sensor, image processor and advanced viewfinder that displays an overlay of shooting info inside the prism.

The brand new 2/3″ 12MP X-Trans CMOS II sensor adopts the same architecture and technology found on the high end X-Pro 1. With a random RGB pattern that eliminates the need for an optical low-pass filter, and combined with the new EXR Processor II, the X20 offers higher even resolution and improved sensitivity over the X10.

Here’s an example example straight from the official X20 brochure that clearly shows the difference in sensor performance. It’s a full body portrait zoomed all the way in. Pretty impressive!

Max shooting speed has been bumped up; the X20 is able to fire at 12FPS (11 shots max) at full 12MP resolution. Also, with the addition of phase detection sensors, the X20 offers a highly increased autofocus system with speed and performance. Other enhancements include reduced shutter time lag and image processing time, decreased start-up time, and a couple of new film simulation modes- PRO Neg.Std and PRO Neg.Hi, which bring back some of Fuji’s most renowned negative portrait films of the past.

One feature that was definitely missing on the X10 was the ability to use film simulation modes while shooting video. The X20 adds this option, as well as giving you better autofocus and letting you set the white balance while shooting HD video.

Oh yea, and it comes in silver too. How cool is that!

A couple of the buttons and shooting menus have changed, but as I said, it’s pretty much the same little Fuji with even more power under the hood. I love what Fujifilm is doing these days, they’re definitely leading a strong charge when it comes to appealing camaera design and advanced technology in the compact camera genre, and with the improved performance, the X20 will surely make it even hard to run out the door with the full DSLR kit unless you really need, or want to carry a bigger camera system.

Obviously, for as much as I love the unencumbering creative options that the X10 had given me during the past year in a wide variety of shooting applications, for bother personal and pro use, inside and out, I’ll be super excited to get my hands on the X20.

Price is the same as the X10 was, which will be $599 when it hits shelves in March. This of course means that the X10 is even more affordable now, only $489. At that price and performance, the X10 is still a fantastic little camera. I’ve had full size 4 x 6 foot professional reproductions made from X10 photos, so if six hundred bucks is just a little too much for your budget, you really can’t go wrong with the X10.

The X20 is available for preorder from both B&H Photo and Amazon, right now. In the meantime, you can drool over the official product brochure for the X20.

Support this site. If you do decide to pull the trigger on an X20, or any other gear for that matter, please consider clicking through these links. It’s like saying, “Thanks, Dan, for taking the time to compile all this groovy info and write these blog posts which distract me from my work.”

Guest Gear Review: Pocket Superzooms by John Shafer
Glacier Mountain Biking, Alaska
Access And Edit Images on Your iPad via the WD My Book Live Hard Drive
First Look at the Fuji XF 23mm f/1.4 R Lens
New X-LR Plugin Automatically Applies Fuji Film Simulations in Lightroom
Returning to My Photography Roots in Boston
Read an Interview with Me on the B&H Photo Explora Blog
Get My Photography On The Brain Lesson 1-10 Bundle