Islands In The Sky – Aerial Photography Above the Clouds 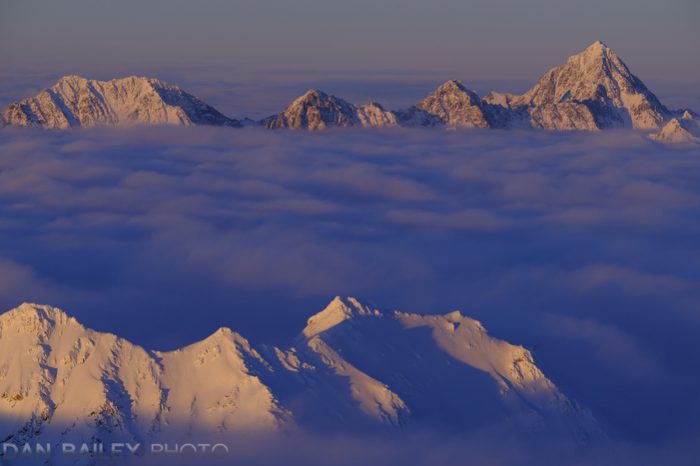 If you’re a regular reader, you know that winter is my favorite time for shooting mountain aerials here in Alaska. On clear afternoons, the low sun casts warm pink and orange light on the snow covered peaks, yielding magnificent views, allowing me to capture what I feel are some of my best landscape images.

After a few straight weeks of overcast skies and ice fog, and two failed attempts to go flying, I finally shoveled out the Cessna and got back in the sky. 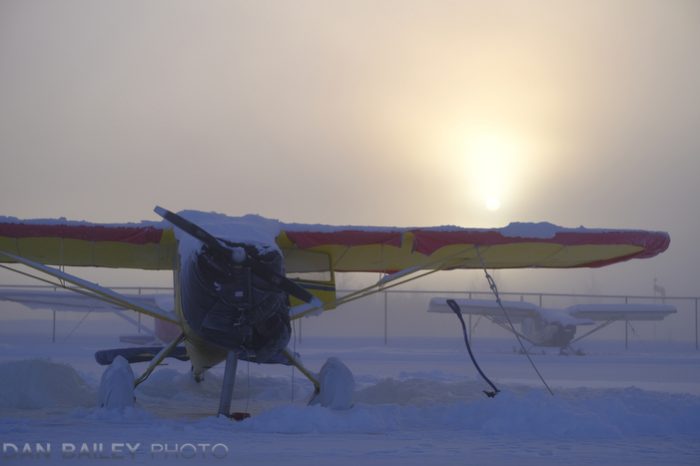 As I often do, I headed towards the Chugach Mountains, which are my favorite aerial subjects around Anchorage. With so many valleys to explore, it’s simply a matter of picking a direction and chasing what seems to be the best light.

I started by heading north and climbing along the west side of Pioneer Peak, which sits near the head of the Knik River Valley. Looking north, I saw a thin layer of clouds hanging over the valley at about 6,000 feet, partially obscuring the lower regions of the mountains that lay to the east.

The tops of the taller peaks poked up through the clouds, like islands hovering above a sea of fog. As I crossed the flanks of Pioneer’s southeast ridge, I caught the full view of this cloud layer which now hung over the entire Knik valley. Scores of high peaks stood isolated in this mystical alpine ocean, their tops being lit by the increasingly warm light of the dropping sun. 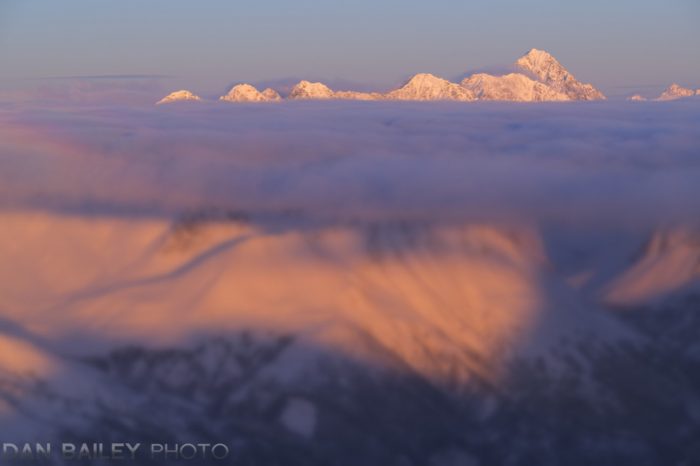 I’ve flow over this area countless times in all seasons, during every month of the year, but I’d never seen it like this before. It was like some magical, otherworldly place where I’d never been. I felt as if I was flying in a whole new place.

Looking down, I could barely see the Knik river or glacier; aside from a few small holes, I was completely isolated on top of the cloud layer.

Keeping my eyes open for a good vantage point to capture this impressive scene, I was drawn to Peak 8675 and its rugged massif of neighboring summits. A few miles to the southwest, I saw a second set of isolated peaks sticking up through the clouds as well.

Although not nearly as high, I felt they would contrast nicely against the taller, more forbidding mountains in the background. Starting with the XF90mm f/2 lens, I flew alongside the closer ridge, opened the window and shot a series of frames lining up the two sets of peaks. 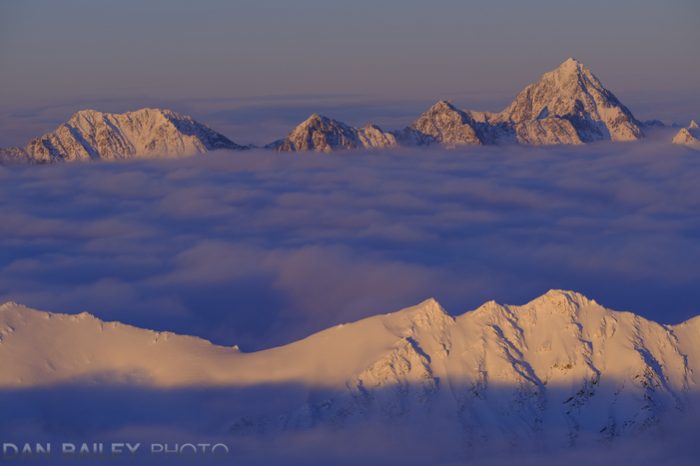 The -10 degree air quickly pulled all the warmth out of my hands and fingers, even through my thick gloves. Although I’m well practiced with this kind of shooting, it’s still a shock on these very cold days. It becomes a constant battle of getting good shots and fighting the pain of freezing digits.

Reaching into my pocket, I opened a pair of hand warmer packs and stuck them into my gloves. That would help, but at these temps, it isn’t a magic solution. Like I said, it helps. Huge mittens would be warmer, but that would make it really difficult to handle the camera.

I really liked the juxtaposition of the two sets of peaks. My favorite is the lead-off shot at the top of the post. However, there was something intriguing about this smaller island, so I flew a full circle around it, shooting 22 frames from different vantage points.

I loved the way the warming light on the snow contrasts with the deep blue of the shadows. The Velvia color palette portrays this so well; it’s a look I’m endlessly fascinated with. As my vantage point shifted to straight west, the clouds became a heavy blanket of gold against that last summit in the line.

After my pass, I pulled the window closed, rubbed my hands together and turned the plane south. The good light was only just beginning and I continued to shoot more aerials for the next 45 minutes as the colors turned to bright pink.

I’ll save those images for a future post though. Stay tuned… 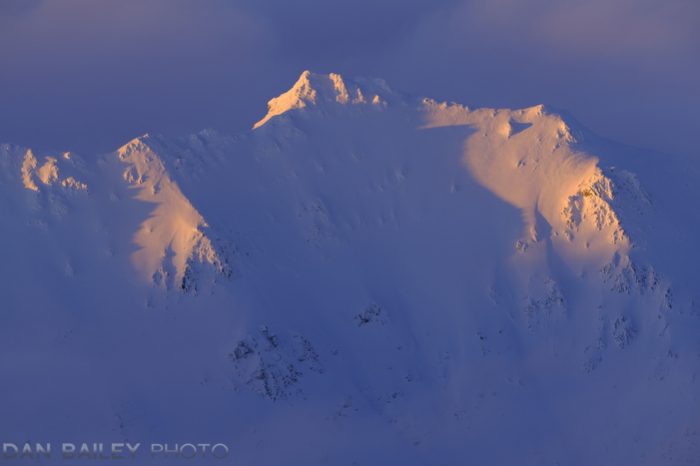 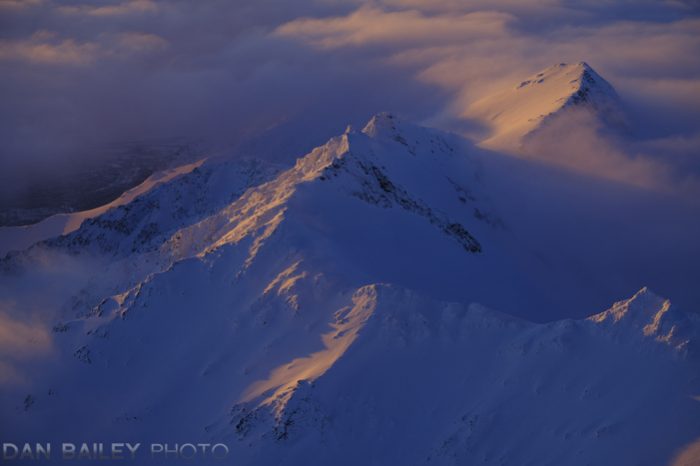 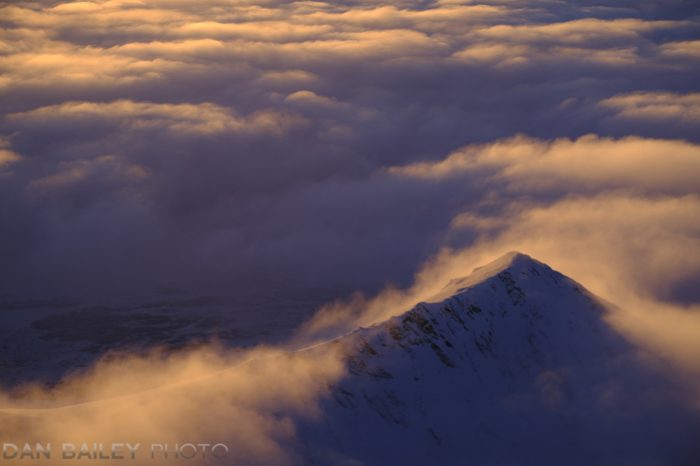 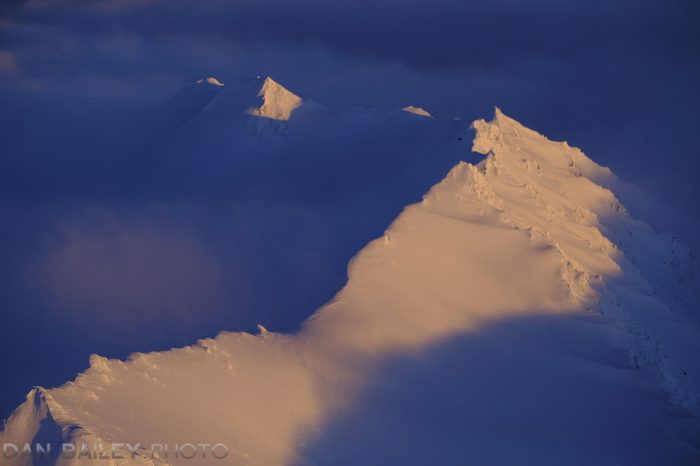