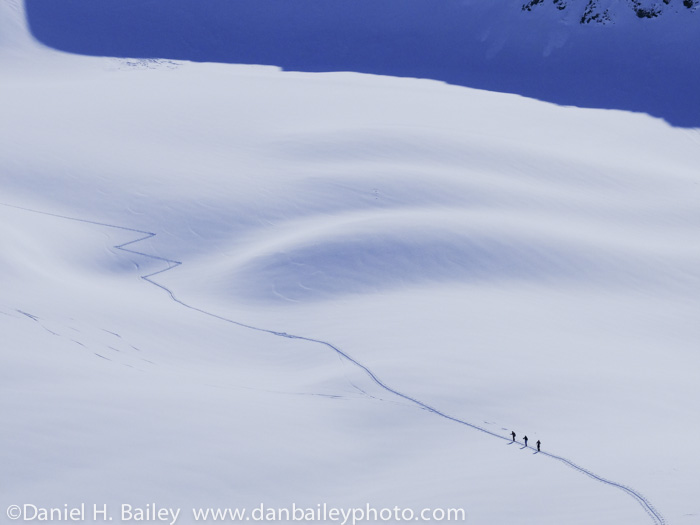 I like to think that there are four main ingredients to a great image: Vision, Anticipation, Technique and Luck. I talk about vision quite a bit here on the blog, and in my Making The Image eBook. Galen Rowell also talks in great detail about vision in his excellent book Mountain Light, which has long been one of my favorite creative outdoor photography reference manuals, as does David duChemin in his own Vision is Better eBook series. Stick around and I’m sure you’ll get another vision post from me soon.

Like vision, technique is something that we all keep learning as we progress through the years. Some people seem to grasp the technical aspects of photography more quickly than others, but for all of us, mastering the craft of cameras and picture taking is a lifelong process. In essence, it’s just mastering your technique just takes time, practice and getting to know your equipment.

The third ingredient, luck, is all about moments. We can’t control them, they just happen. You might have heard the term “f8 and be there,” which was first said by photojournalist Arthur Fellig. Sometimes being in the right place at the right time and having your camera on and pointed in the right direction is all that’s required to capture a fabulous photograph. Remember, though, luck cannot be controlled.

Forget what I just said above. You can control luck; to a certain extent, if you learn how to use anticipation in your photography. I actually consider anticipation to be the secret ingredient behind luck. It’s essentially knowing, or having a pretty good idea of what’s about to happen next. It’s like seeing in the future, only without 100% certainty. 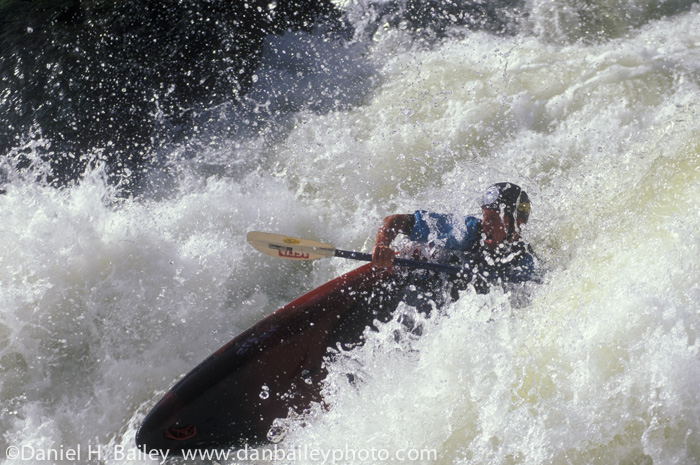 Anticipation is thinking geometrically instead of linearly. So much of photography is about anticipation, and learning how to incorporate this important element into your style will allow your success rate to skyrocket. Learn how to see geometrically and you’ll create great images on a more regular basis, because you’ll go from mere observer to being an active participant in whatever event that you’re shooting.

Anticipation is about evaluating the scene before you. It’s about studying and understanding all the elements that will need to come together in order to make a great image, all in the blink of an aye, and then putting yourself in optimum position so that when a great moment does happen, you’ll be right there, ready to snap the photo. It’s basically stacking the “luck deck” in your favor. The truth is that more often than not, outstanding images are rooted in anticipation rather than in pure luck.

The types of elements that you might anticipate in your scene can vary. Let’s look at some specific image examples. In the skiing shot above, which I shot with my Fujifilm X20, I recognized that my three friends were going to cross that large open basin below, so I stood up on the ridge and waited for them to get down there. Of course, this meant that once I’d nailed the shot, I had some catching up to do, but that’s often the price I have to pay as an outdoor adventure photographer. 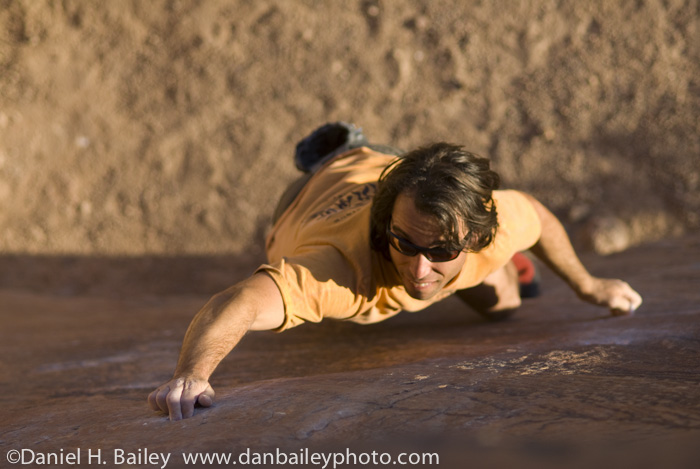 In this photo, which is the cover shot on my Behind The Action eBook, I knew in advance that the climber was going to grab for that two-finger pocket with his right hand. I’d seen him climb this bouldering route before. I’d climbed this route, and I’d grabbed the pocket myself before, so I had a pretty intimate knowledge of how he’d move up the rock.

Armed with this knowledge, I waited for good light and then grabbed my Nikon 24mm f/2.8 wide angle lens and positioned myself in the right vantage point so that I could press the shutter the moment he reached for the pocket. It wasn’t a surprise when he grabbed it, and so I was fully prepared for that moment. 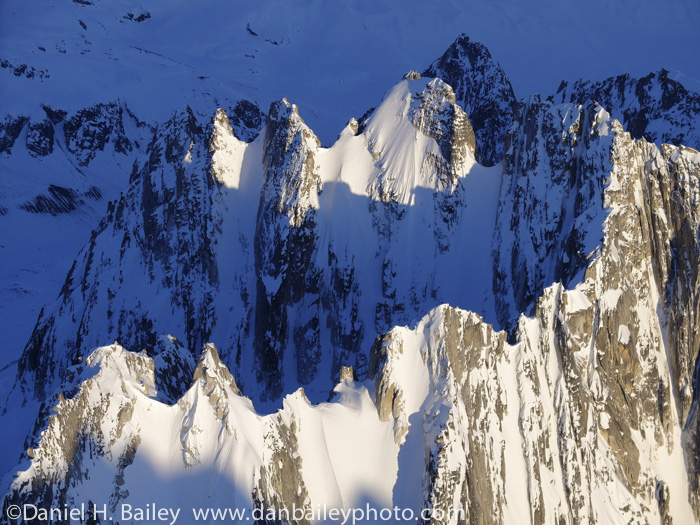 Light is obviously a very important element in photography. Often times when shooting landscapes, you actually imagine how the light from the setting sun will look on your subject in, say an hour.

That’s looking into the future. That’s anticipating what your subject will look like in a time that’s later than “now,” and then seeking a good vantage point from which to shoot. It’s about recognizing a potential convergence and then moving to a place where you can capture it. This aerial photo of the Kichatna Spires was also shot with the Fujifilm X20. When you’re flying through the air at 80 mph, you don’t really have time to think, you only have time to see, anticipate and press the shutter.

The placement of your subject in the frame is a big one, especially for adventure and sports photography.

Let’s say you’re shooting a trail runner. You watch the runner follow a certain path through the landscape. All the while, you’re scoping out the scene until you see a compelling background. You’re also keeping your eye out for possible vantage points so that you can create the most compelling composition. Recognizing this potential convergence, you work backwards, knowing that in order to get that shot, you’ll have to move to a certain location and put on the right lens so that you can frame the shot as you see it in your mind. 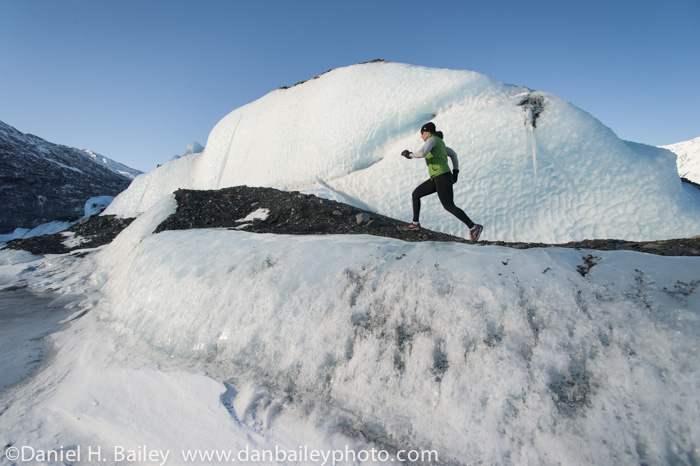 Eventually, the runner reaches that spot and you fire the shutter. You got the shot because you used your imagination, anticipated a potential photograph before it existed and then worked to make it come to life. You didn’t just stand there and take a snapshot, you looked. You saw. You imagined. You moved. You looked again. You kept moving, or possibly even ran to the new vantage point, and looked again. Again, thinking and acting geometrically. This shot above was made with my Nikon 14mm f/2.8 ED ultra wide lens.

Anticipation is also about understanding your subject matter with a certain degree of intimacy. Most good sports and adventure photographers succeed in part because they possess thorough knowledge of the activities that they’re shooting. Having an idea of just when a rock climber might place a piece of gear or lunge for that handhold, or knowing the path a kayaker might take through the rapid helps you better anticipate those decisive moments when the peak action happens. 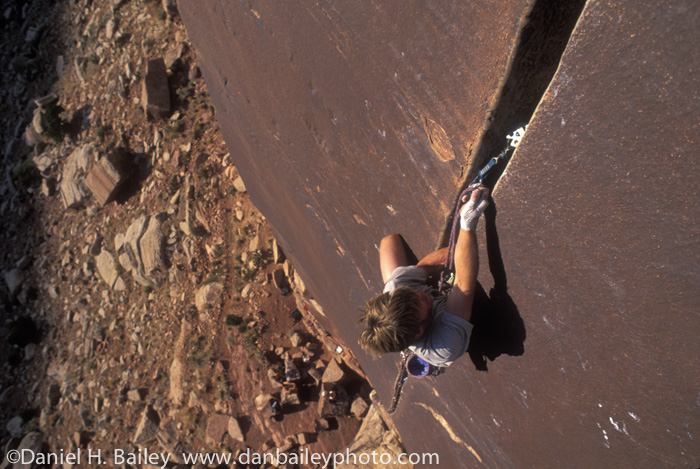 The same goes for any type of photography really, whether you’re shooting dancers, race cars, baseball, little kids on the playground, or even a simple portrait, all of which involve studying your subject and trying to get an idea of when that decisive moment or expression might occur. As you get better, your anticipation skills will increase to the point where you’ll have total awareness of your scene. The process of seeing, evaluating and knowing how to respond will become second nature.

If you learn to work the element of anticipation into your photographic style, you’ll go from being an audience member to a director in the image making process. You’ll start to see a vast improvement in the quality and production value of your photographs.

For more photography ideas, check out some of the other creative tips posts that are stuffed inside the archives on this site. Also, see a detailed review of the specific gear that I useto create my imagery.