Photographing Icebergs by the Light of the Moon 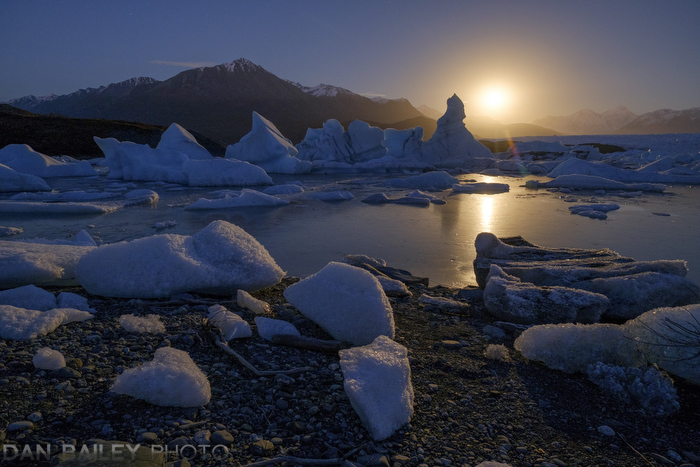 The other night, I flew out to the Knik Glacier in my little Cessna and spent the night among a scattering of beached icebergs. It was a spectacular adventure, one that I desperately needed, after weeks of not doing enough of this kind of stuff.

The aurora forecast was calling for strong displays on Saturday night, so I was hoping to shoot some photos of the northern lights over the icebergs, similar to what I had done when I did during a fatbiking camping trip out here a couple years ago with my friends Glenn and Josh.

It was the night of the full moon, so I was pretty excited about that as well- I’d seen it come up the previous evening while shooting aerials over the Chugach, (see below) and I was excited to try and photograph it with a long lens as it came up over the glacier. 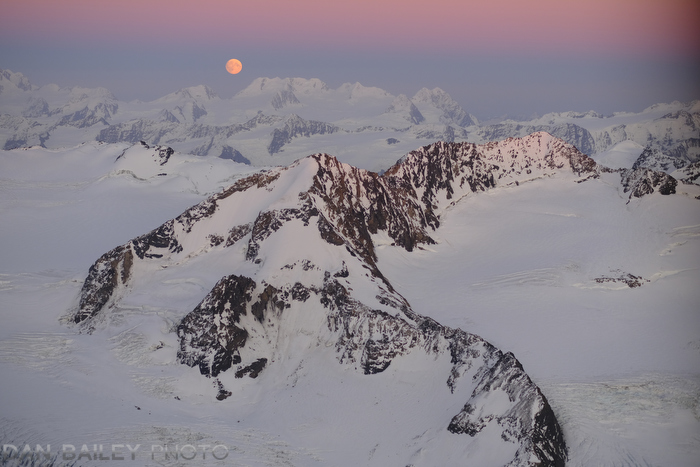 Sign up below and I'll send you a special discount code so you can start learning how to master your Fuji camera today.

After shooting a few sunset aerials in the area, I landed on the gravel bar around 7:30PM, just as the last light was fading from the sky. I hiked about a half-mile with my gear down to the shores of the Knik Glacier Lagoon and set up my Megamid right in front of a nice big iceberg. (The lagoon is the lake right in front of the glacier that’s full of floating icebergs that have calved off.)

As it got darker, I saw the light from the moon start to grow below the horizon. I was really excited to capture some long lens moon shots similar to the night before, but when it finally crested above the mountains, the sky was already much too dark. There was no way I was going to be able to show any detail in the full moon and still preserve the icy landscape.

In a very cool twist of fate, though there was a bit of haze at the horizon, and when the moon rose above the distant peak, it looked just like the sun. Huge ball of bright yellow orange, just like at sunrise, except the rest of the sky was quite dim, as was the light on the ground. 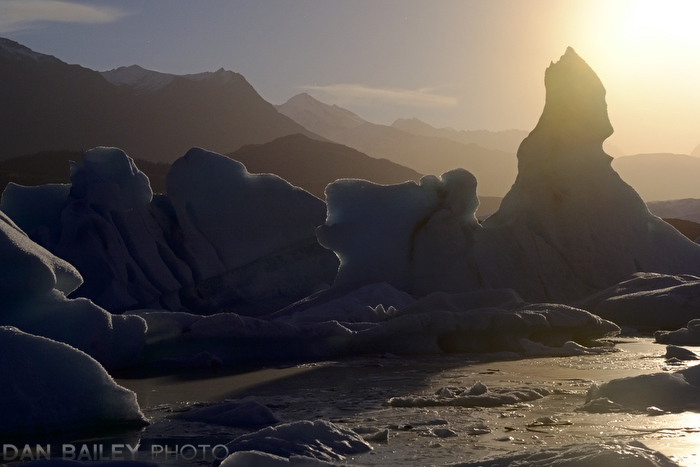 Switching gears, I opened up my exposure for the ambient light and spent the next hour and a half shooting surreal glacier landscapes under the light of the warm, October Hunter’s Moon. I was all by myself out there, and I remember the solitary excitement I felt as I ran around with my tripod, looking for different vantage points and not saying a word.

The air was cool, but not cold- in the high 30s. Chilly enough for gloves, hat and puffy jacket, but not at all uncomfortable. With the scene in front of me, I probably wouldn’t noticed even it was.

I shot in RAW+JPEG with my Fuji X-T2, mostly in Velvia mode, but almost all of these shots are straight JPEGs. Only the leadage at the top was a RAW processed image. Below is the straight JPEG version, which shows you just how much information can be drawn out of the Fuji RAW files. It’s pretty amazing! 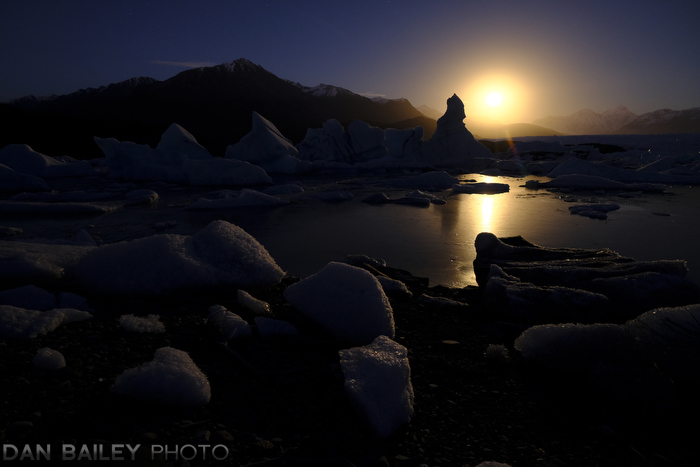 At about 9:15 PM, I put the camera down for a few minutes to gather wood and make a pleasant little campfire between a couple of ice chunks near my tent. The rocky shore is littered with driftwood- the remnants of trees that were brutally ripped from the surrounding hillside by the moving ice and deposited here many decades later.

It was the perfect company for my rice and chicken backpacking dinner, which I enjoyed while gazing around at the still, blue world around me, and watching out for any sign of the aurora. Then, after dinner, more pictures, in between forays to gather more wood and keep the fire going. I think I finally slid into the sleeping bag at around 11:45 PM.

I set an alarm to wake me up every couple hours to check for aurora, but there was nothing. I think I can see an ever-so-faint band of green in one of my photos, but that’s about all. There seemed to be no activity that night, but I didn’t really care; I was already quite excited about my moonscape photos, and besides, once I’m tucked away in my bag, it’s kind of fun to stay there through the night. 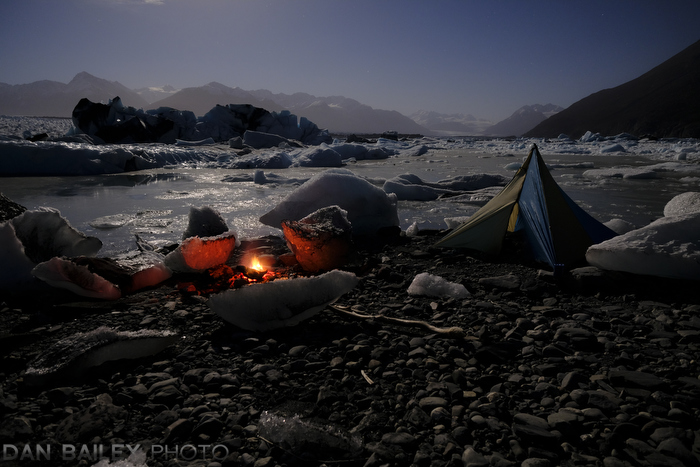 As you can see, I was camped really close to the shore. I wouldn’t camp this close in the summer, when many big icebergs break free from the face of the glacier. Combined with higher water levels from the incoming creeks, this can occasionally displace the water in the lagoon.

During short and very unexpected periods of “high tide,” when the lagoon surges, the water can come up quite a few feet- that’s when many of these smaller icebergs get beached. Since the glacier has slowed down for the season, they’ll spend winter on the shore- dead ice at the end of a very long journey that started as snowfall on the surrounding peaks about two hundred years ago, or more. In the spring, they’ll start to melt, and by early summer, they’ll be gone.

Given the limited glacier activity and the fact that the lagoon is started to freeze up, I wasn’t too worried about the water surging during the night. However, I did hear plenty of creaks, cracks and distant tumbles from the glacier, and I saw the water making small surges under the ice from time to time. 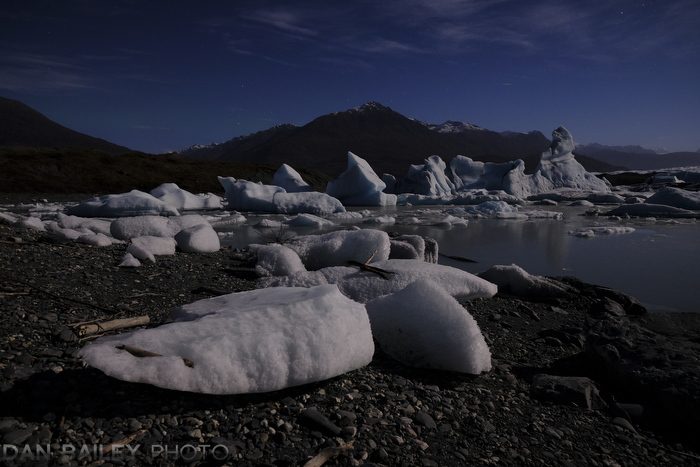 I did have a dream that night where (in my dream) I had woken up to a surge and all of my gear, including my tripod, X-T2 and all of my lenses were gone, having been swallowed up by the advancing waves of murky glacier water. It was one of those dreams that goes two deep (a-la Inception), and at one point, I had woken up in my dream only to find that it wasn’t a dream- all my gear was really gone, even though I was still dreaming.

Eventually, I topped out from my two-layer dream, probably from the wind flapping the fabric of the Megamid. Much to my relief, all of my gear was still there, safely beside me. Later on that night, two of my rock tie-downs came loose and the Megamid blew over, leaving me exposed for the rest of the night. Wasn’t too bad, though; actually quite enjoyable. I had a much better view from my sleeping bag, and the sky was clear, so no big deal. Still no aurora though.

I shot even more photos the next morning, but that’s a blog post for another time…

What adventures have you had lately? 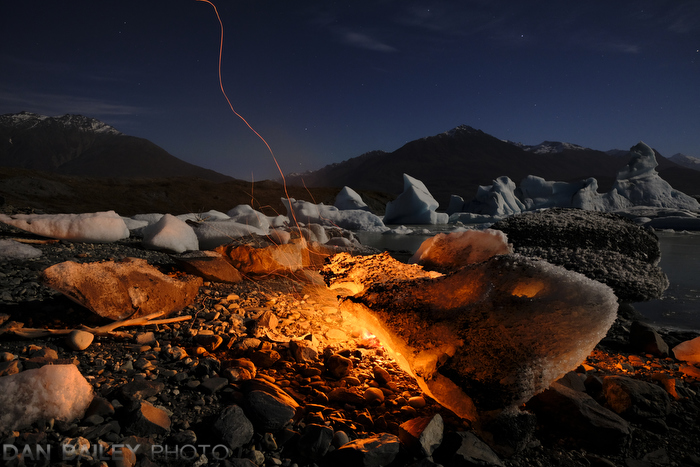