Watch The Replay of My FUJIFILM X RAW STUDIO Webinar

My answer: A day of bush flying and genuine exploring. Where to go, though? Checking the weather, the best option seemed to be north, away from all that occluded front yuck that’s been sitting in Prince William Sound this week and making Anchorage cold and windy. 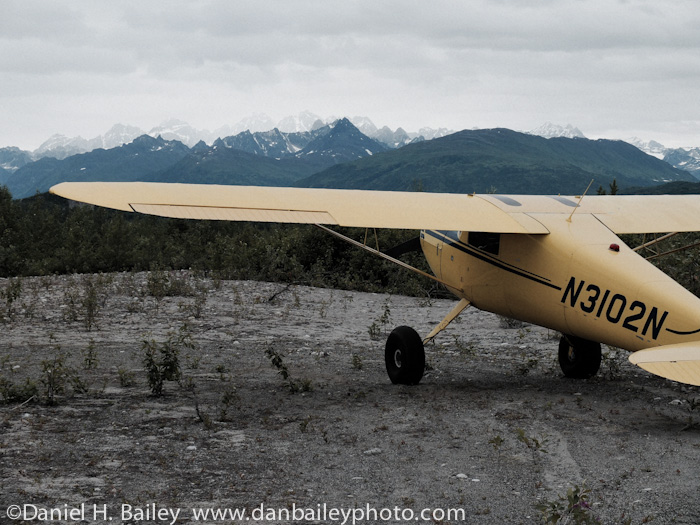 After poring over Google Earth and talking with my pilot friend, I decided to head up to the Kahiltna Glacier, which is the massive 36 mile ice sheet that drains the entire west side of Mt. McKinley, as well as many of the other south facing peaks in the park including Foraker and Hunter. It’s the longest glacier in the Alaska Range.

I’d heard about a landing strip on the river bar just south of the Kahiltna. It’s not long, maybe 800 feet, but that’s long enough to go in if I’m light. I figured I’d at least go up and have a look, so I I loaded up the little Cessna with some extra clothes, food, emergency gear and my Fujifilm X10, which has become my defacto airplane camera. It’s good enough to capture high quality imagery and it hardly takes up any room. In fact, often times, I just wear it around the neck in the cockpit.

An hour and a half later, I found the strip, did a couple of low passes, dragged my wheels once to test the surface, then set up for landing. Coming in over the short trees on the south end, I dropped it onto the sand about 150 feet down the strip, bounced once or twice on the bushwheels and then rolled to a stop. Adding some power, I taxied to the end of the strip and shut down.

Landing a short strip gives me the same excited feeling as climbing a hard pitch. I’m always a little jittery right afterwards as my adrenaline gradually recedes. In many ways, flying gives me similar feelings of risk, reward, adventure and pushing my limits.

Once down, I loaded up my daypack, slung the X10 around my shoulder and set out to explore. My plan was to hike up to the glacier, which lay about a mile and a half away from the strip. I could see it off in the distance,  but terrain that you see from the air looks a lot different from the ground.

After a mile up the gravel bar, I ran into brush and forest. I plodded through trees and thick willows up over the first rise, but quickly became dismayed when I saw just how far the trees went on. It was going to take about a thousand yards of serious bushwhacking to get to the toe of the glacier. I wasn’t really up for that, so I bailed and looked for another way.

I though about trying to follow the river on the west side of the gravel bar, but I couldn’t see around the first corner. I didn’t know if that would even go; you never know with water, so I started walking east across the bar, looking for another way.

Eventually, I stumbled across a narrow rock gully that appeared to follow a low contour through the trees. I had no idea how far it might go before tree-ing out, but I headed up to have a look. What I found was a solid corridor of boulders that cut almost the entire way through to the toe of the glacier. You can actually see this little “rivulet of rock” on the Google Map. Again, though this stuff is hard to see from the ground. 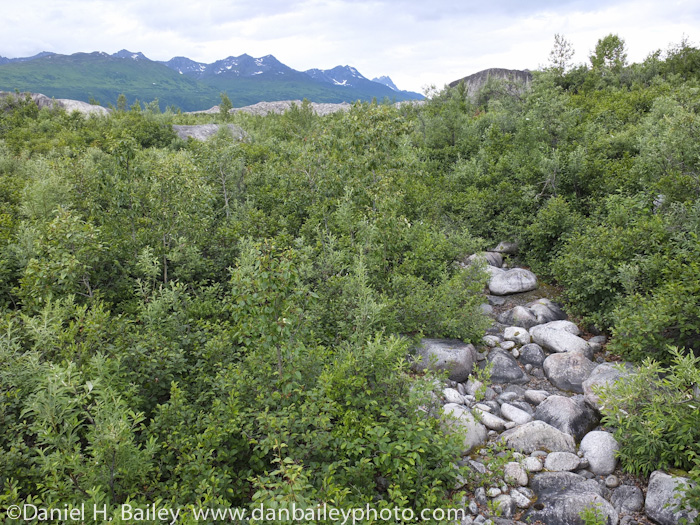 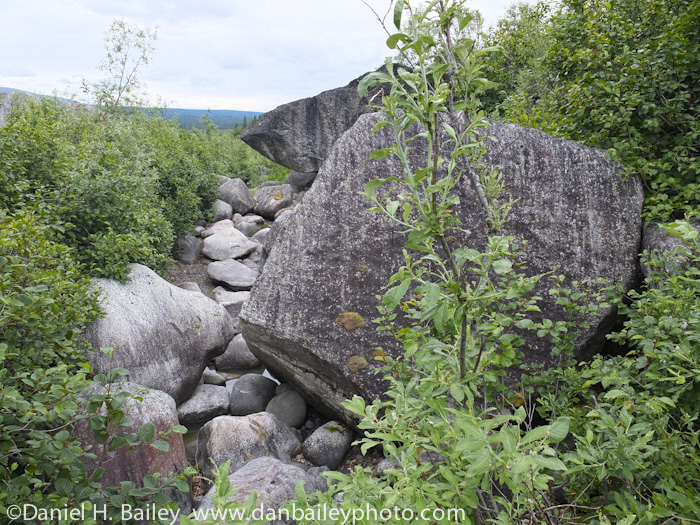 Most of it was walking and boulder hopping, although I did have a few stretches of full on willow bashing. I made noise the entire time, my bear bell ringing from my belt, but I didn’t see any animals besides birds and mosquitos. I did see about two million moose pellets and figured that the moose must use this as their main corridor through the trees. 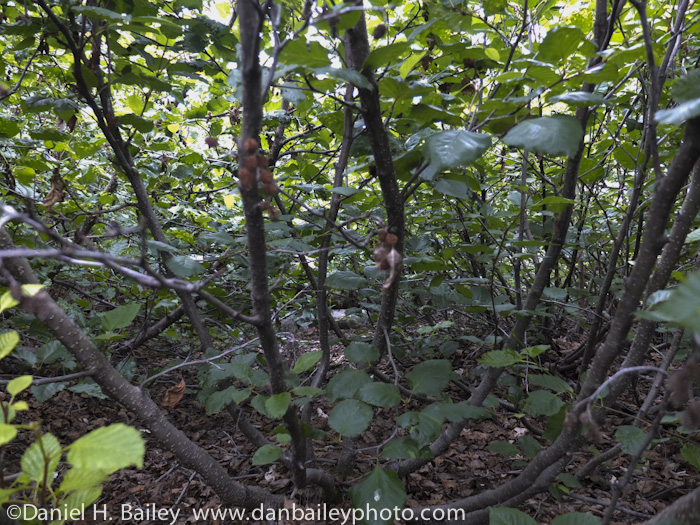 Finally, I popped out on the other side, in front of an enormous, undulating bed of rock, dirt, mud and old glacial ice. My prize. I gave myself a time limit and hiked as far as I could, shooting photos along the way. I’d hoped to make it all the way out to where the exposed ice begins, but as I said, distances can be deceiving. I’d have to go about 2.5 miles out to reach that point, which, on this terrain, would take more time than I had to spare.

Since the light was gray and overcast, I decided to shoot black and white photos with my Fuji X10. Putting it in auto-EXR mode, I captured a few images that I feel really portray the massive mountain landscape of this area. As usual, I was completely impressed with my X10 and was actually happy not to be lugging a heavier pack of DSLR gear through all that brush. Overall, I’m really happy with how it performed yesterday during my little backcountry aviation photo adventure. 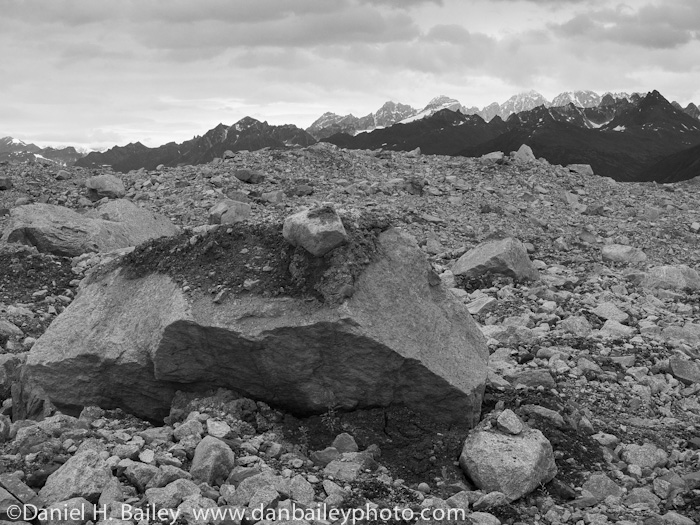 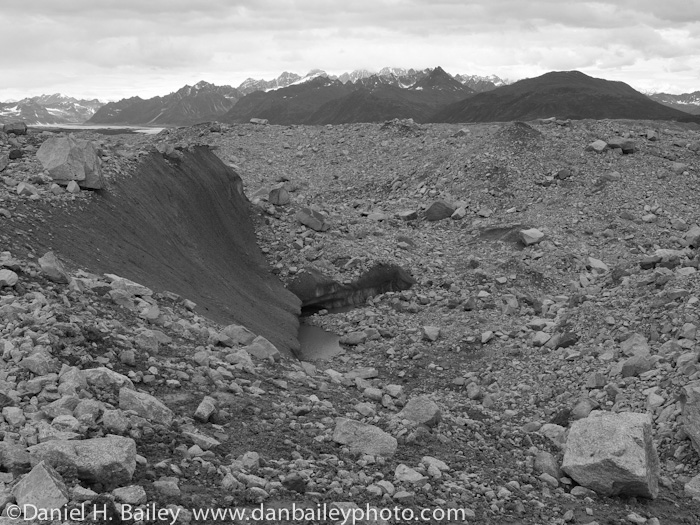 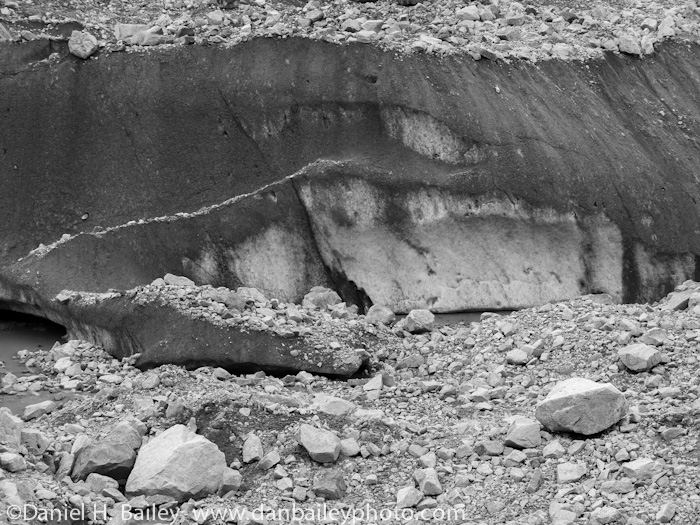 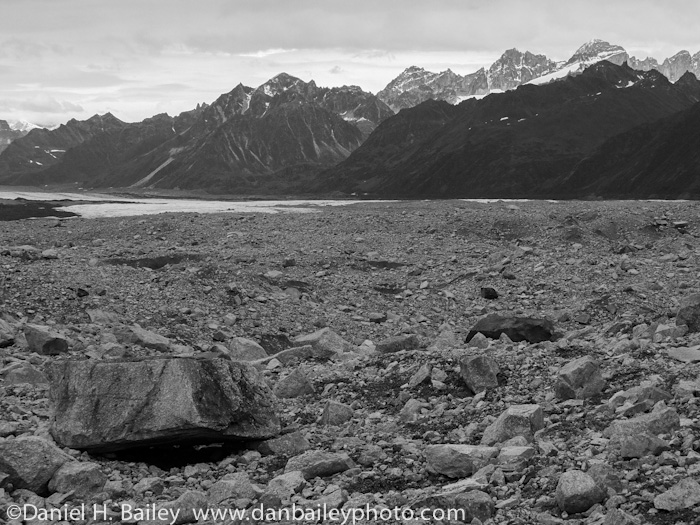 I lost my bear bell on my way back through the brush, but that was the worst event of the day; fortunately, I hadn’t needed it. My departure from the sandy gravel bar strip went without a hitch, and confirmed that on a soft runway with no wind and no trees on the takeoff end, 750 feet is about the shortest that I can go if it’s just me in the plane. I’d take you up there to show you, but I wouldn’t be able to make off the strip with both of us in the plane. 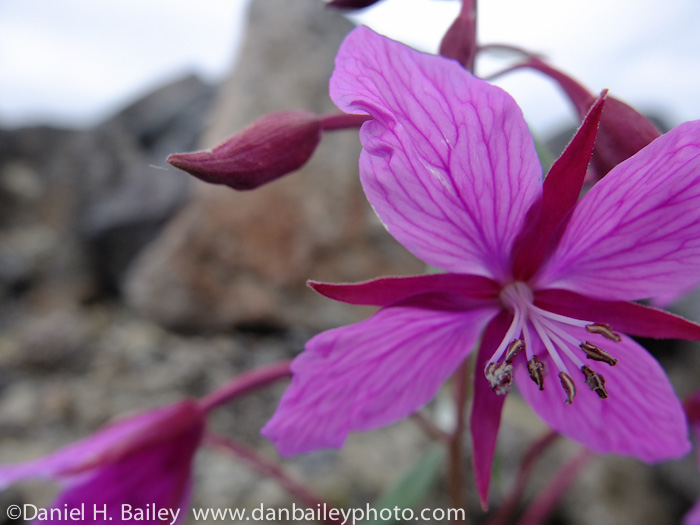 Poll: Photographers, How is Your Economic Outlook?

Reflecting on My Own Photographic Path and Passions

The Best Lens For Shooting Portraits

Go Mobile with a USB Charger For Your Camera Batteries

Subscribe and get notified whenever I write something new and exciting!