You want something great? Something inspired? Something that’s beautifully introspective and full of profound insight? Then give a guy like David duChemin a huge block of time with nothing to do but think and write and that’s exactly what you’ll get.

His brand new eBook, The Inspired Eye 3- Notes on Creativity for Photographers is the most inspirational and explanatory book on creativity that I’ve read in a long time. Maybe it’s the best one ever. I don’t know, I’m still reeling from that fact that I wish I’d written this book. Not that I begrudge David, how can you begrudge a guy whose spent the past few months in a wheelchair? (He nearly fell to his death in Venice last year.)

You can’t, but you can at least have some envy the vast amounts of solitude that’s he’s had lately. (Don’t you just hate being interrupted when you’re furiously creating?!) Solitude, as David explains in his book, is one of the most necessary elements for creativity, and having just read through the entire book, I can say that he’s used his quite well.

Within the pages of The Inspired Eye 3, which is the third book in his series about creativity, David explores what guides us along in our creative process and also what tends to block it. Of course, if you read it, you’ll see that most of what blocks it is our own excuses, procrastinations, fears, justifications, blah blah blah… you get the idea. We’re our own worst enemy towards being creatively productive. We’re the ones that build the wall.

Exploring such ideas as imagination, visual sketching, risk, talent, action, play, trust, among others, David lays out how each one plays a role in the creative process and how to break through those blocks that hamper our best and most closely held ideas. He interjects fabulous quotes from some of the most famous minds like Albert Einstein, Mozart, Pablo Picasso, John Cleese and Henri Matisse.

Some of the best quotes, however, come from David himself. My favorite is this one, because he seems to have written it just for me.

“Forget the thousand ideas screaming to be brought into the world. If you listen to all of them, you’ll never get to work… Stop it. Pick one. Move forward. And when it’s done, pick another, and finish that one too. But which one to focus on? Who cares!”

What’s that? You say he wrote that for you too? See, I told you he’s good!

Regarding the photography in The Inspired Eye 3, my favorite is the 12-shot series of the pier that illustrates his sketching ideas towards making the final image. This is a great reminder that even perceived giants like David duChemin sketch and work through a process when they make their best imagery. Creativity is work. It takes time, energy, risk and of course, placing the camera up to your eye and snapping the shutter. Even when you don’t trust that what you’ll get will be great.

Having read and reviewed a number of David’s eBooks during the past year I’ve come to this conclusion: Every single one is worth buying. I liken them to quarterly journals that still only cost as much as a monthly magazine or a 16oz cup of chai. I’ve certainly gained a tremendous amount of useful insight from his eBooks, which is why I feel so good about recommending them to you. At only $5, they contain more motivational bang for your buck than just about anything. 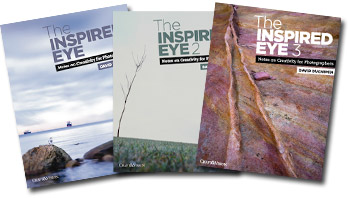 So get The Inspired Eye 3- Notes on Creativity for Photographers, tuck yourself into a quiet corner to read it, and then delve into your own process and see what comes out the other side.

As always David, thanks for the inspiration and keep healing.

The Photography Gear My Readers Can't Live Without
Full Review of Luminar 2018 for Mac and Windows
Nikon Announces the 24.1 Megapixel D7100 Camera
Sometimes A Crop Makes All The Difference
Get My Brand New eBook - "Behind The Action"
3 Great Budget Carbon Fiber Tripods
Featured Image: Relaxing, Alaska Style
What Chase Said, But Remember to Be Good To Yourself Too