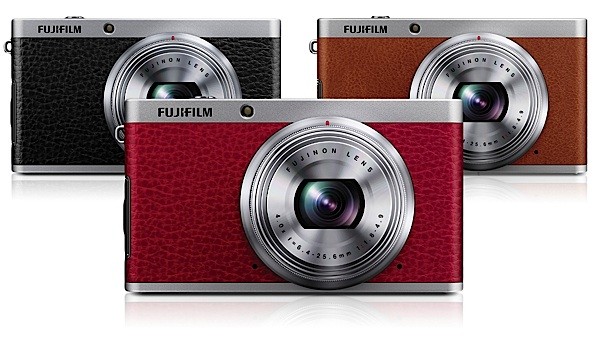 Fujifilm is on a roll with their X cameras. In 2010 they hit us with the wildly popular X100, which suddenly put little cameras back on the map. Unbelievable digital quality in a camera that looked just like a real camera. They followed up with its little brother, the X10, and you know how much I love that one. Then came the 16MP interchangeable lens X-Pro 1, which rivals full frame sensors in terms of image quality, and the new XE-1, which won best of show at Photokina this year. It’s essentially the X-Pro 1 without the optical viewfinder.

However, the one that I really wanted to see at this year’s PhotoPlus Expo was the new XF1. For this premium point and shoot, Fujifilm took the guts and brain of the X10, stuck them inside an even smaller package and then slapped on some serious style.

The XF1 has the same 2/3″ 12MP EXR CMOS sensor, the same image processor and man of the same features as the X10. Image quality is about the same as the X10, which for a camera of this size is pretty darn good.

However, that’s not even the coolest thing about it. Realizing that it’s the outside stuff that determines how usable a camera really is, the Fuji designers did some serious tweaking in order to make this a fun and workable camera.

The most impressive thing is that the XF1 has a fully mechanical zoom lens that, same as the X10, doubles as the camera’s on-off switch. That’s right. You operate it with your hands (fingers) instead of pushing that little tab back and forth. Just like a real camera.

Of course, you don’t want the thing to be sticking way out there when it’s not needed, so once again, it’s Fuji engineers to the rescue. They made it so that with a simple twist and a click, the entire 25-100mm f/1.8-4.9 zoom lens disappears completely into the body. This makes the XF1 the smallest camera to have a mechanical zoom lens. There’s even a “standby mode” that keeps the lens out for a quick startup, but saves battery power. 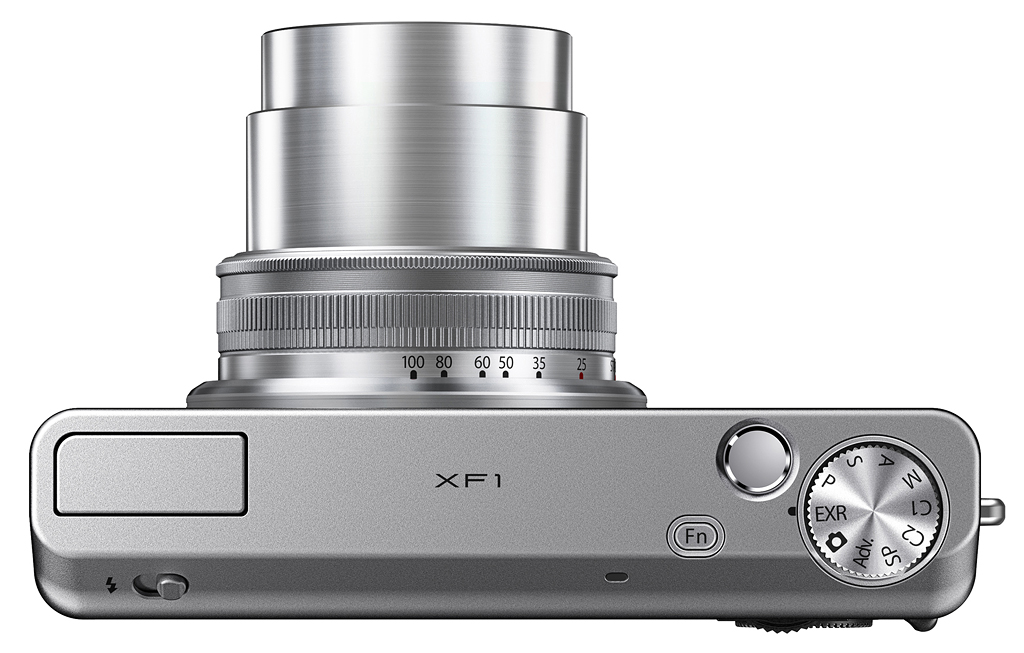 Since it’s a much smaller body, the XF1 doesn’t have room for as many exterior controls as the bigger X cameras in the lineup. To make up for this, Fuji added an E-FN button that lets you temporarily change the six back buttons into customizable function buttons. This lets you control more of the camera’s many features right from the back, instead of making you dig into the menus for everything. Again, pretty cool. 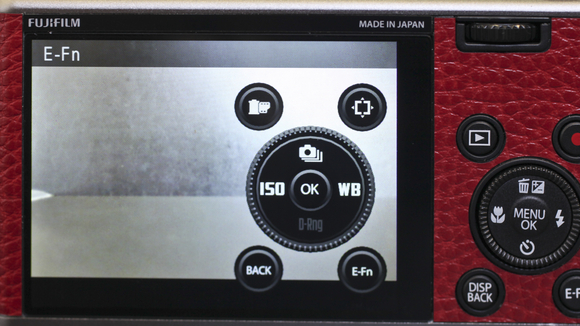 I actually got to play around with the XF1 for about an hour, and I have to say, I was definitely impressed. I didn’t want to give it back. Once you get the turning-it-on part down, which is a bit of a mystery if you have no idea what you’re doing, you pretty much forget that you’re using a camera that’s not much bigger than a cassette tape case, for those of you who still remember what those look like.

The mechanical zoom is really nice, and it’s even wider than the 28-112mm lens on the X10. You do lose a little on the telephoto end. Would have been nice to have that, but since the lens itself is smaller, you’re starting to lose some light out there. That said, the glass itself is very good. Fujinon lens quality has been top notch for years.

Features are mostly the same as the X10, and they’ve even added all the fun new filters that are found in the X10 firmware update. One thing that’s missing is external flash control. No, you can’t trigger your battery powered strobes and remote speedlights from your shirt pocket sized camera. However, it does do rear curtain sync.

Shooting with the XF1 is really fun. It’s little. It’s non-obtrusive. You pretty much forget that you’re using something that small, and the same can be said after seeing your pictures. This is a point and shoot camera that will go just about anywhere an iPhone will fit and still produce imagery that’s good enough for pro work when needed.

Very simply, the XF1 is an outstanding little camera. It’s built extremely well, it takes great photos and it has enough features to let you explore your creativity in a variety of both casual and semi-serious shooting situations. With all of this, I see this becoming one of the bets compact cameras in its class.

And it comes in red, tan or black. Total classic style. You know that stuff about the best camera being the one you have with you? Nothing says you can’t bring it and still look good. You know, for those times when even the X10 is too bulky and cumbersome.

The XF1 costs $499 and is available for pre-order. It should ship in a few weeks.

Preparing For The Susitna 100 Winter Endurance Race
Technology Vs. Vision- Today on B&H Photo Insights
My Early Years: The Eliminator Bouldering Photo
I'm Back, Baby!!
Full Review of the Ultra Compact Fujifilm XF50mm f/2 WR Lens
Don't Fall Into This Trap With Your Photography
Behind The Scenes - How I Got My Favorite Road Biking Photo
New Video Tutorial - 10 Essential Autofocus Tips