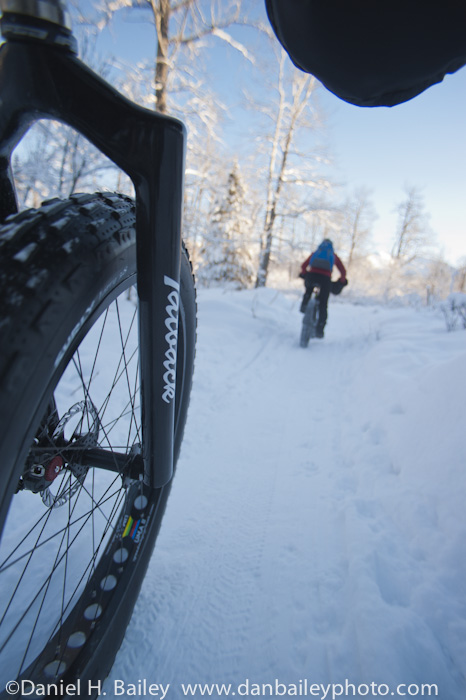 I like to think that one of the defining elements of my style is the fact that I often shoot in the first person. By that, I simply mean that I’m an active participant in whatever sport or activity I happen to be shooting. For me, it’s as much about the adventure as it is the photography.

What I feel I gain from shooting in this style is that many of my images have that “Right in the middle of the action” feel to them. In fact, I’d say that’s what I strive for in my imagery, and getting a first person action shot that works is highly rewarding, as is confirmed by watching me hoot and holler at the LCD screen when I review my shots and see one that’s really good.

Of course, shooting in first person mode presents its challenges and, shall we say, bloopers. I’ve dropped cameras, banged them into things, as is confirmed by all the dents and duct tape on my lens hoods, almost run myself off the trail, and I’ve nearly been stepped on, kicked, run over, and otherwise mildly maimed through my own actions. (Remember this: I’m only a danger to myself!)

Fortunately, I’ve never been serious injured as a result of my adventure photography, but I’ve had a few close calls. More often than not, though, close calls usually involve the camera rather than me, which is why Nikon makes them tough!

For example, to get this shot above, I unslung my camera, held it down at feet level, between my pedal and my fork, and shot with one hand as I rode through the forest on my Fatback snow bike behind my subject.

That was right before my bulky insulated boot caught the camera strap as it came around a few pedal strokes later and kicked my D700 into the snow about five or six feet away into the snow bank. All part of getting the shot, right?

Of course, riding one handed along a deep, somewhat slippery and curvy trail on a bike that has four inch wide tires is not always the easiest thing to do. This is how I ended up after a similar attempt back in October when we had our first snowfall. You can just imagine me screaming down the trail, heading into the turn, realizing that I’m not going to make it and then throwing my camera hand high into the air as I launch off the bike into the snow, saving the camera from impact. 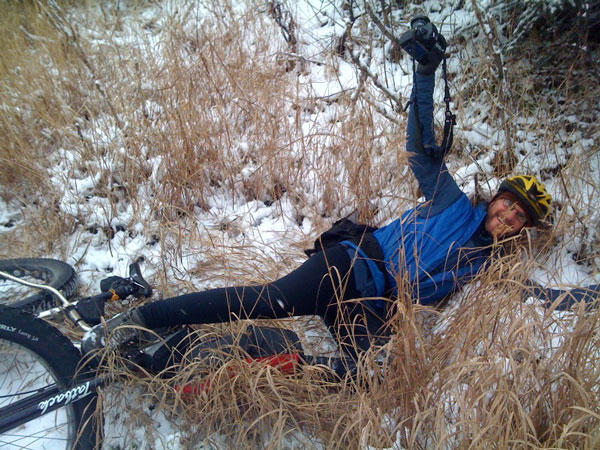 Anyway, my point here is that life is an adventure and… well, maybe I forgot where I was going with all this. I’ll just end by asking you this: What would you say defines your style of photography and how far do you go to get your shots?

Featured Image: Trail Running in the Fall, Anchorage, Alaska
What Can You Do With a Short Telephoto Lens?
Cycling All Night Long in Denali National Park, Alaska
Recent Publication: AOPA Pilot Magazine, January 2013
Crossing the Alps by Bike – Part 3: Downhill to Italy
Shooting Mountain Biking with Off Camera Flash
Read an Exclusive Interview with me at Thirdeyemom.com
Come See Me This Weekend at the Kenmore Camera Digital Photo Expo