The Story of My “Sunrise on K2” Image

The wind drags a whisp of gray clouds over the summit, shielding it from my view. The sky above shifts from the black of night to the cobalt blue of early morning. At 4:30 A.M., sunrise is still a few minutes away, although the alpenglow of pre-dawn has come and gone, briefly lighting the surrounding peaks like candles in a chapel altar. Soon, they will glow with the orange rays of first light.

Since the mountain was not visible from my camp, I hiked for an hour in the dark, the beam of my headlamp illuminating the path over rocks and ice. Now I sit anxiously beside the trail. My camera is fastened to a tripod within arms reach, aimed and focused, filled with a fresh roll of Fuji slide film. There are 5 more rolls in my pack, I hope that’s enough. Looking around, I can see sharp Himalayan spires thrusting into the sky in all directions, but my attention is commanded towards the one that rises 12,000-feet above the glacier in front of me, higher than all the rest. If luck is with me this morning,the clouds will drift past before the sun breaks the horizon, and I’ll capture a full view of K2 when the first light hits. 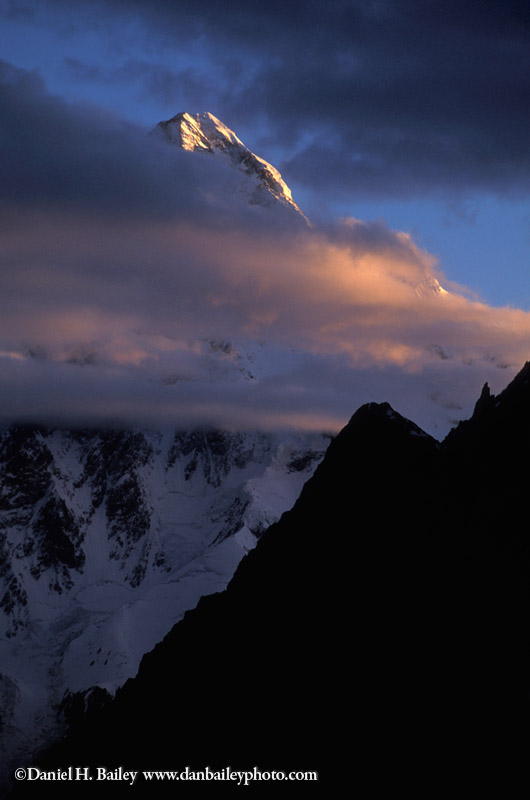 At 28,250-feet, K2 is second only to Mt. Everest in height. In sheer majesty, though, it is second to none. It stands alone at the end of the Goldwin Austin Glacier in Northern Pakistan; a fortress of rock, encircled by a moat of glaciers which isolate it from it’s nieghbors. Gasherbrum IV, Broad Peak, Mustagh Tower soar toward the cold sky within view of the pyramid giant, but K2 dwarfs them all, leaving them to pay homage to the King of the Karakoram Range.

K2 is also second to none in danger, challenged each year by scores of climbers who test their physical limits and luck by trying for it’s summit. Because of it’s technical difficulty and extreme elevation, K2 is cosidered to be the hardest climb in the world. Of all those who attemt to reach the top, few succeed. Others die, but most turn back, defeated. The mountain swats at them like flies, trying to shake them loose with avalanches, violent storms, and the life threatening effects of altitude sickniss. In a matter of days, Accute Mountain Sickness can reduce a strong climber to a delerious victim, racked with debilitating coughing fits. The potential for danger increases when storms rage for days, preventing a retreat. If the victim doesn’t descend, the mountain will claim another life without remorse.

Unlike the Himalayas of Nepal, K2 is not visible from any inhabited place. It’s approach requires a rugged 75-mile trek up the Baltoro Glacier; 7 days from the nearest village. It was first mapped as part of the Great Trigonometric Survey of India in 1856, and noted randomly as Karakoram Peak #2. Since no local name could ever be found, it’s numerical designation stuck, and remains as the mountian’s only official name.

The first atttemp to climb K2 was in 1902 and led by English occult figure Aleister Crowley. The team never even reached 22,000-feet before turning back when a member developed Pulmonary Edema.

In 1909, Prince Luigi Amedeo of Savoy, also known as the Duke of the Abruzzi, organized an expedition that would become the model for future big mountain expeditions. Unfortunately, his elaborate planning and logistics got him no higher than 19,600-feet. A member of his team declared that K2 was unclimable due to its fierce conditions and countless obstacles.

This proved to be true for the next 45 years. 3 American expeditions all failed in 1938, 1939, and 1953 respectively. The 1939 expedition was frought with tragedy with four members being lost during the attempt.

Finally, in 1954, K2’s elusive summit was reached by 2 Italians, Lino Lacedelli and Achille Compagnoni. At last the Karakoram King was subdued, but only for a brief moment. The Pakistani Government closed the region to further exploration for the next 20 years.

When the ban was lifted in 1975, the much publicized American expedition obtained the first permits, but failed miserably. Since then, a number of teams have succeeded in summitting K2, but it remains the ultimate mountaineering challenge.

For me, it is a photographic challenge, for I have travelled a long way to get within sight. While I wait for the sunrise, I think about the climbers who are camped on it’s flanks, braving extreme temperatures and altitude.

As if my wishes are granted, the clouds drift away and the sharp summit pokes through. When the first ray of light splashes on it’s eastern face, I jump behind my camera and fire off an entire roll. After reloading, I continue to shoot as the light creeps downward, turning the cloud bank into an orange stripe. The electronic whirr of my Nikon’s motor drive shatters the silence, and with light and sound, a new day dawns in the King’s icy domain.