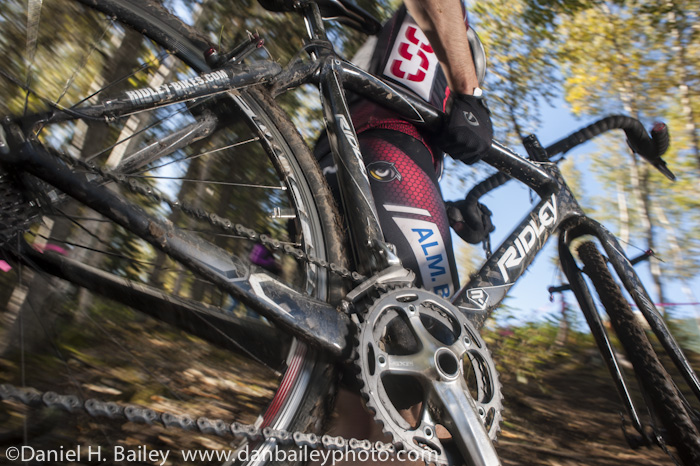 Cyclocross season began here in Anchorage this weekend, and so Saturday morning I headed out to the course with a camera, a few lenses and some light. My flash of choice was the Photoflex TritonFlash battery powered strobe, because it’s a versatile unit that’s easy to carry, and it packs a powerful punch.

Now hang on a minute. Beautiful fall day, lots of sunshine and blue sky? Couldn’t I have gotten by without extra light? Why use flash at all?

Because I wanted my images to go BANG!! I wanted to show the sharp glint of chainrings, and spokes, the texture of muscle and chromoly and the sweat and pain of exertion. I wanted to bring my viewer in close enough to get trampled and run over by the racers and flash helps me bring out these details and freeze the action.

Also, because I knew I’d be dealing with mixed lighting conditions. The coolest part of the race course ran up a short rooty hill inside the forest, and if you’ve ever tried to shoot inside the forest during a bright sunny day, you know that it can be a photographer’s nightmare. There’s either too much contrast, or else it’s just too dark to make for exciting photos. 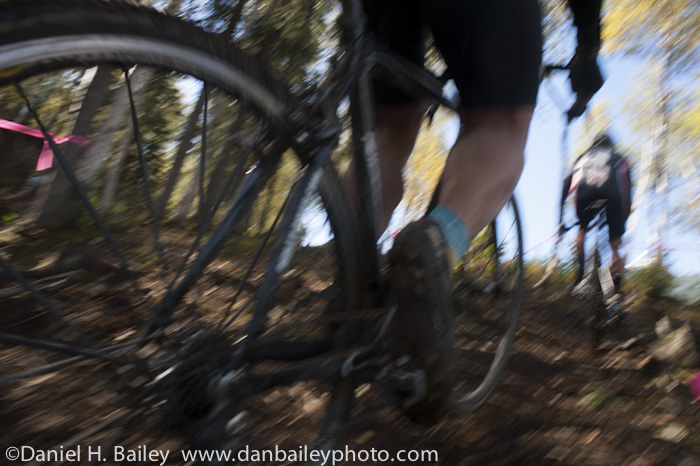 Throw in some extra light from a strobe or even a single flash and it’s like night and day. Excitement. Detail. Color. Texture. Wow!! Both of these photos (above and below) were shot at 1/100 sec, at F/8 with my Nikon 24mm f/2.8D lens. However, see what a difference the flash makes? 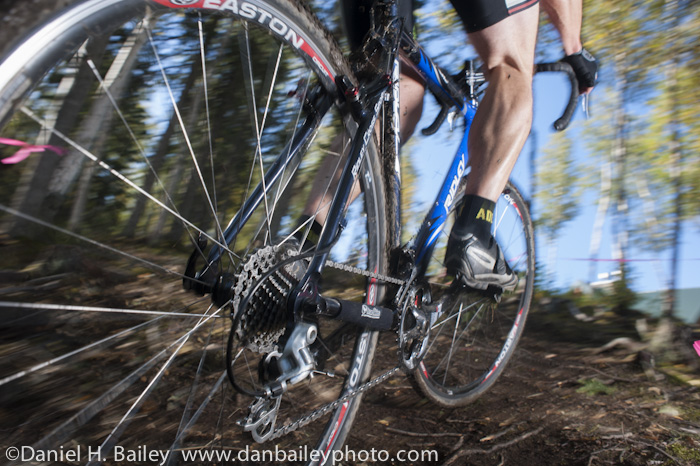 When using flash, the shade is actually your friend, because it lets you control the main light that’s falling on your subject. Sometimes it’s just no use trying to fight with the sunshine, and if you can find a vantage point that puts your subject in the shadow, you can build your photo from the ground up. 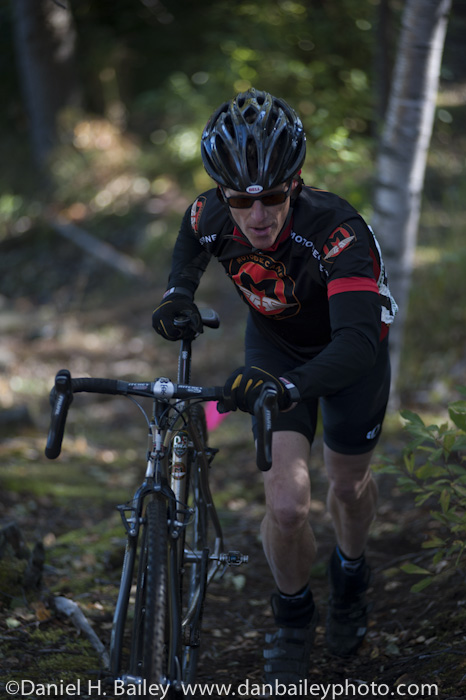 In these shots, I set my camera exposure to preserve the background, whether it be blue sky or the shaded forest, and then added a single off camera light to freeze the motion and highlight the riders.

The flash was set 90 degrees off axis, which gives the shot three dimensionality and depth. I set the TritonFlash to FP mode, (1/8 power) and triggered it with a pair of PocketWizard Plus radios. You can see in this shot above that the no-flash exposure is too dark, and just doesn’t have any life.

The light is placed about as close as I could possibly get it without being in the way, although in my own clumsiness, I managed to kick it downhill into the dirt at least once. Fortunately, it’s built to last and nothing broke. I wouldn’t say that I abuse my gear, but it definitely gets caught in the crossfire, so it needs to be tough.

I could have just as easily used one or two small flashes, but the TritonFlash gives me added power and much faster recycling times. Plus, the included Octodome NXT softbox helps throw a nice even blast of light. Note, I do have the shoe mount bracket that will let you use Photoflex softboxes with regular flashes. 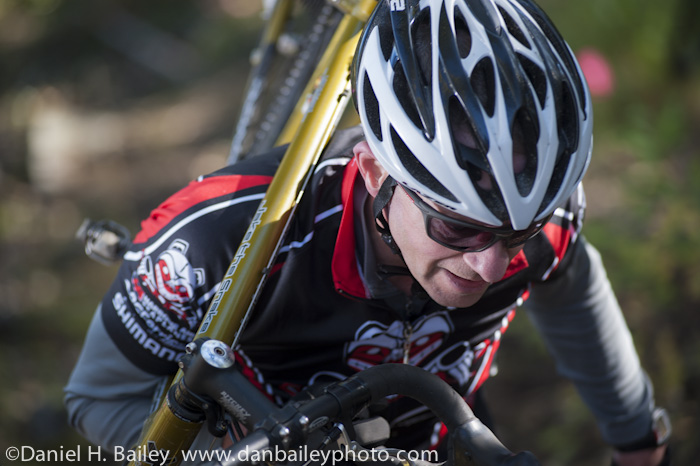 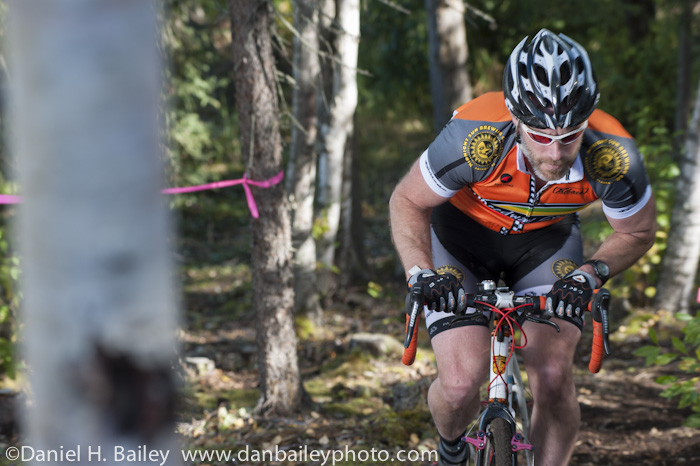 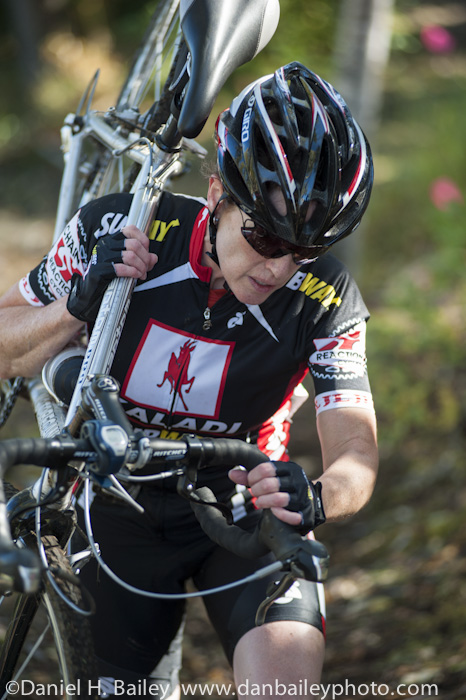 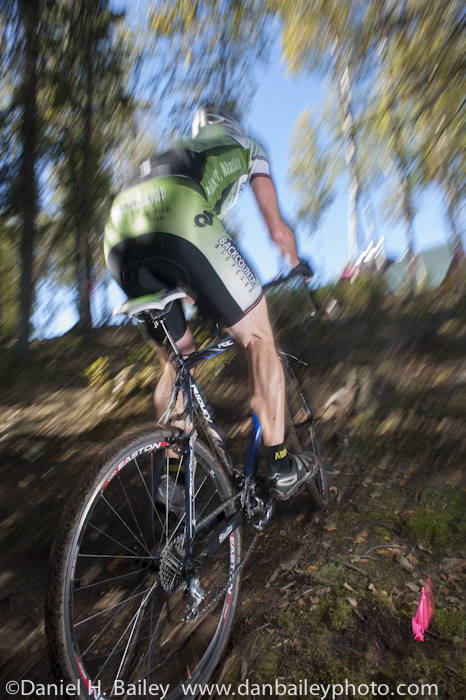 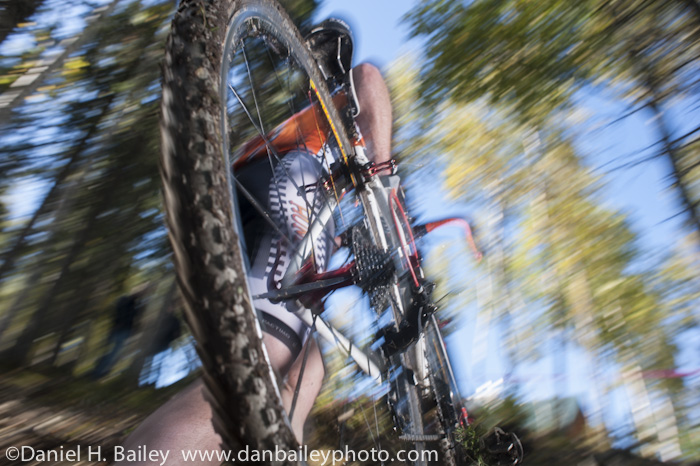 Finally, no matter what kind of setup you have, using flash allows you to experiment that much more with your creativity. As with any technique, practice with your gear, so that when you find yourself in front of the action, you’ll be able to grab it with skill and confidence.

Read more about off camera flash techniques and equipment in the outdoors in my 83-page eBook, Going Fast With Light.

See more race photos from this series, where I try to take a slightly different approach each week. 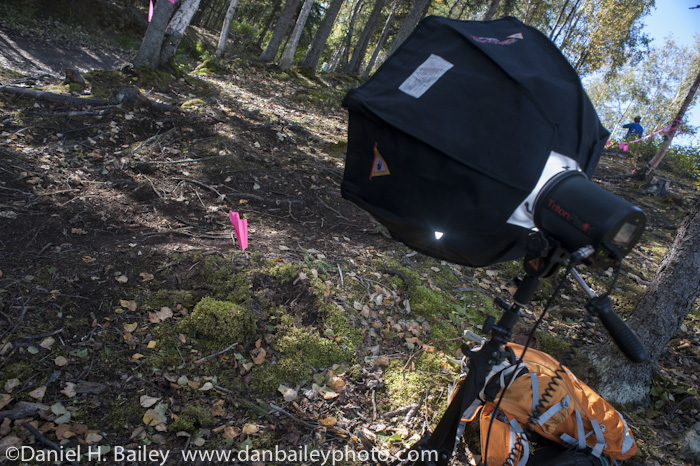 Helicopters and Icebergs- Recap of My Knik Glacier Photo Workshop
Nikon AF-S 85mm f/1.8G Lens
Don't Fall Into This Trap With Your Photography
Learn Something New About Your Camera Today
My One Day Alaska Brown Bear Photo Workshops
The 4 Ingredients for A Great Photograph
First Look at The New Rugged Fujifilm X-T1 Camera
Creating Dynamic Images of People