If you read my 3 Ultra Lightweight Tripods post a few weeks ago, you know that I’ve been looking for a new backpacking tripod ever since I broke my Velbon MAX-i 343E.

It wasn’t the sturdiest tripod around, but it had a following among a number of nature and outdoor shooters and was small enough to fit on the bike in my Revelate Designs Tangle Bag.

I decided to take this opportunity to get something that wasn’t so… um… cheap, and after looking around and considering my needs and my budget, I picked up the Manfrotto 732CY Carbon Fiber Tripod and a Giottos MH 1302-665 Ball Head.

I like the Manfrotto 7322CY  because it’s a great compromise between weight and price. The latest version comes with a Manfrotto ballhead, it weights about three pounds, and it has a street price of around $219. That’s well under half of what a comparable Gitzo costs, like the GT0531 Mountaineer, which runs about $469. In my case, price won out.

With three leg sections and the center column, it will extend to about five feet. The legs can also extend with the flip lock buttons (see photo above) for shooting low to the ground.

It’s not quite a sturdy as some of the Gitzo models, but it will handle most normal and medium size cameras/lens combinations just fine, especially if you’re not running the legs too far out. Those small legs are pretty thin when fully extended, but how often are you shooting landscapes when the legs fully extended anyway? Like I said, for the price and weight, it does a pretty darn good job. 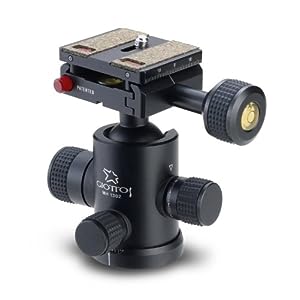 I’m a big fan of the Giottos heads. They’re nicely machined and just feel really sturdy in your hands. And even though I usually like the simplicity of the single ball head, I love the precise, rock solid adjustments of the triple knob design that the Giottos use. It just feels more professional.

I got the MH 1302-665 model, which has the Arca-compatible quick release plate and a bubble level. Giottos also make the MH 1302-210C, which is basically the ball head without the quick release plate. It’s certainly lighter, more compact and would work fine for some of the lighter DSLR cameras. I just felt that the QR plate would hold some of my heavier camera and wide angle lens combos. (D700 and 14mm f/2.8.)

Also, I like the QR option, because I see myself getting Giottos heads for my other larger tripod as well. The plate itself is pretty low profile, and in fact, its been on my main camera for a few weeks know and I almost don’t even notice it’s there.

I see this as great tripod/head combination for a wide variety of nature, outdoor and travel photography. It’s light, it’s relatively sturdy and it didn’t set me back the better part of a grand. I’ve already used this new setup a few times, but I look forward to taking it up into the high country this summer. I’ll post a more complete review later after I beat it up on a few photo trips.

Great Deals on Gitzo, Manfrotto and Induro Tripods
Comparing the Fujifilm X-T100 and the X-A5
2014 Was The Year of the Fujifilm X-T1
What Can You Do With a Short Telephoto Lens?
Coming Next Week: 5-Part Series on How To Become a Pro Photographer
Read My Cover Story in the New Issue of CLARITY
How to Use the PRE-SHOT ES Setting on the Fujifilm X-T3
Luminar 3 With Libraries is Coming December 18