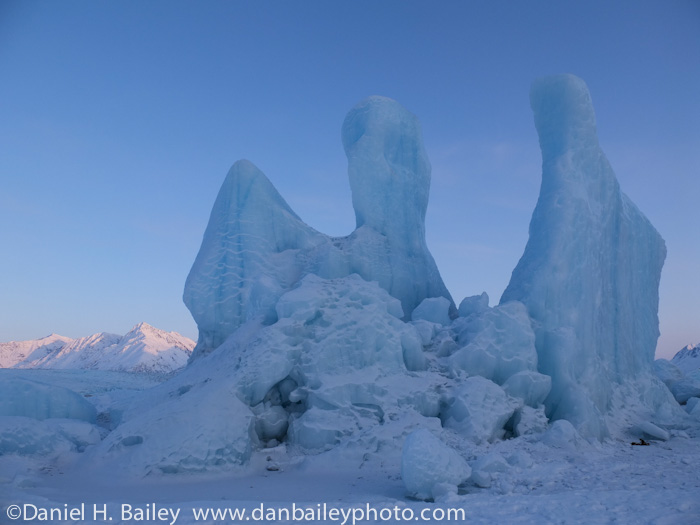 The other day, I took my friend Glenn Charles, aka @trvlingbagabond, on a little bush plane adventure. Although he’s had many amazing trips all over the world, Glenn had never been in a small plane before, so while he was a little nervous, he was pretty giddy at the chance to see Alaska from the air.

Of course, in order to have him work off his first class seat assignment, I had him help me shovel snow away from my little Cessna 120 while I preheated the engine with my MSR XGC/aluminum stovepipe rig. Lucky for him, last week’s wind had blown most of it down to the pavement, so he got off pretty easy. He was pretty giddy when our wheels left heground.

Our first destination was the Knik Glacier, which is one of my favorite airplane stomping grounds. As we flew up the valley, we noticed quite a bit of open water in the Knik River, which meant that the Knik glacier biking season is quickly drawing to a close for the year. It can still be done, but with the increased sunlight, those ice bridges are getting thinner by the day.

When we reached the edge of the glacier, I flew a couple of circles so that Glenn could take pictures of the ice formations below. Then I turned back around, dropped in over the river right next to the cliff on the right and lined up on the 1,600 foot long gravel strip that cuts across the moraine just off the river.

Although I had walked the entire strip before, and knew about the whoop-dee-doo about halfway down the strip, I had never landed it on my own; I’m usually out there by myself and usually use another shorter strip nearby. However, with two people, I needed the extra length.

As with many glaciers and mountain valleys, the wind out there can really knock you around, which would normally make me nervous about flying that close to the cliff. Fortunately, conditions were still and calm, so when I saw the end of the strip, I pulled back on the throttle, dropped in over the threshold and let the wheels settle to the ground. Once we were down, I pulled the power, applied light braking and rolled gently over that bump in the middle before slowing to a stop.

That’s when I told Glenn that this was my first time landing “Picnic Strip.” He was glad that I waited until now to let him know. Exiting the plane, I discovered on definite advantage of landing gravel in the wintertime: the rocks are all frozen into the dirt. This means that there’s much less debris to get thrown up into the bottom of the plane. I learn something new every time I fly. 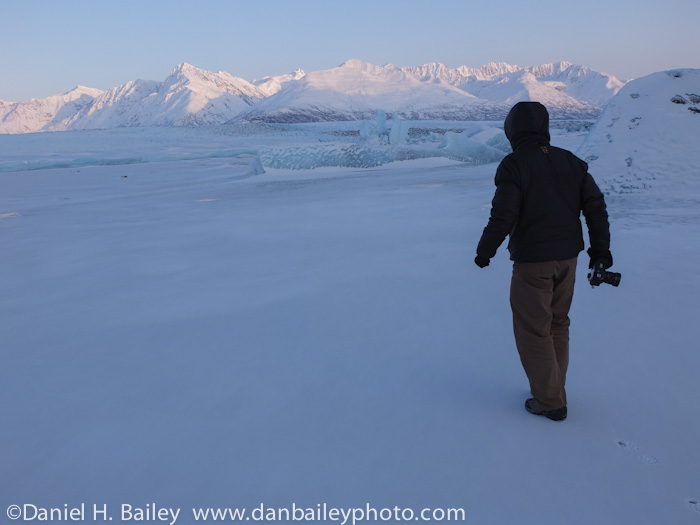 Glenn and I grabbed our cameras, hiked over the little ridge and went right out onto the ice to explore. He remarked that the last time he’d seen a glacier, he was in a kayak. He’d never actually walked around one. I’ve been out here on a few different occasions, and it never ceases to excite me. Enormous ice blocks, some frozen into the lake, some sitting right on the edge of the bank, I wonder to myself how old they are.

What began as snowfall, perhaps hundreds or even thousands of years ago, got compressed into a solid sheet of ice over the years, before gravity forced it downhill, where it broke up over the rugged mountain terrain, and ended up calving as chunks into the lake. Now, here they are, just waiting for us to photograph them. Before leaving, I kicked off a small piece to take home and use for ice cubes in my scotch. 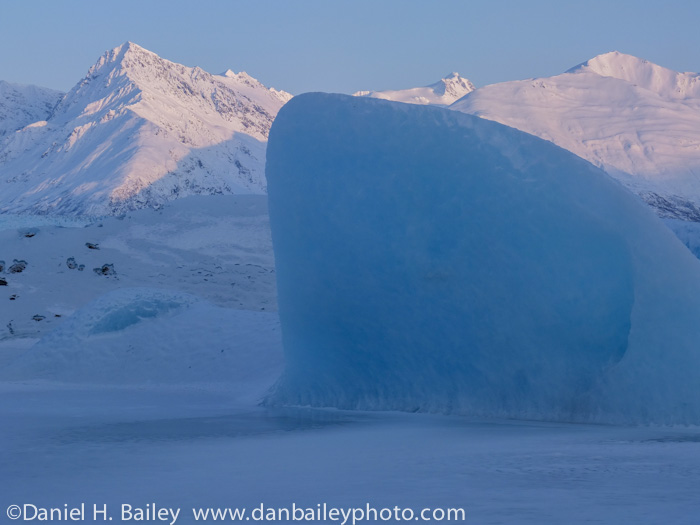 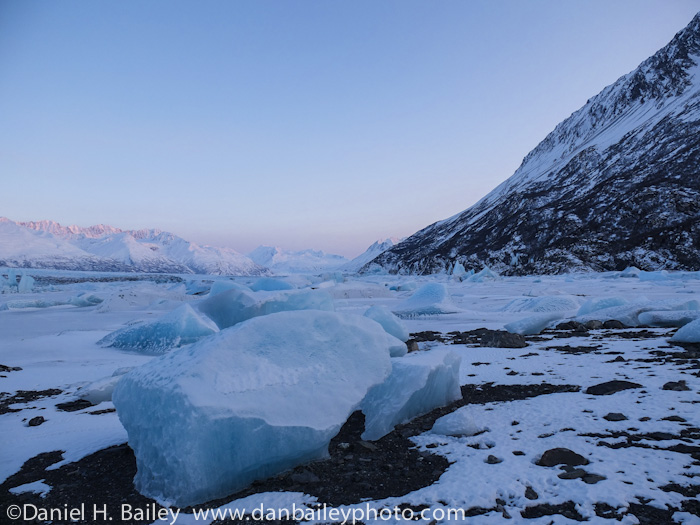 With sunset quickly approaching, we headed back to the plane so that we could explore one more area before heading back to Anchorage. I fired up the engine, turned the plane around and poured on the coals. Opting to take off in the opposite direction, I figured that we’d hit that whoop-dee-doo just as we reached flying speed.

I watched the airspeed indicator climb slowly as we raced down the runway, and although we hit the first little bump before we reached flying speed, the plane was going fast enough to be light on the wheels, so it wasn’t much of a knock. A second later, we hit the second, bigger bump. I dropped the right aileron for a brief instant to give us a bit of extra lift, pulled back on the yoke and we bounced into the air. Cruising a few feet above the ground, we gained additional speed and then climbed out with a turn to the right.

Ten minutes later, we circled over the Colony Glacier, which spills into Inner Lake George. I’d landed on the lake last month when it was bare ice, but since then, it had seen three big storms. Much of it had blown off, though, and when I flew low and dragged thewheels, I could tell that there was only a light layer over a base of hard packed wind slab. Turning back around, I set the little Cessna down right onto the lake. 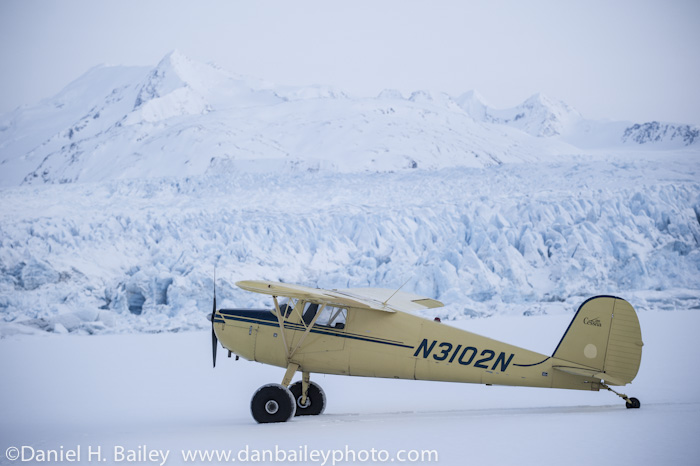 We didn’t have much time to kill, but it was enough to get out and take a few pictures before climbing over the top of the Chugach front range and heading back to Merrill Field for an gorgeous evening landing. I let Glenn steer the plane all the way down Eagle River Valley. I think he’s hooked.

My camera setup for the day was my trusty  Fujifilm X10 and my D700 with the new Nikon AF-S 70-200mm f/4G ED VR Telephoto Zoom Lens. Glenn had his Nikon Nikon D800, and his trio of Carl Zeiss lenses- the 21mm f/4.5, the 50mm f/1.4 and the 100mm f/2.0. It’s an amazing setup, and between the ultra high resolution of the D800 and the Zeiss glass, it produces absolutely stunning image quality. For serious outdoor and landscape work, this is a rock solid combination.

I love Glenn’s photography. He doesn’t just have great gear, he’s got a great eye as well. Check out his writeup and photos of our little Alasak bush flying adventure and visit his website, The Traveling Vagabond. He lives a pretty amazing life and his adventures aredefinitely worth following. He’s been up here exploring Alaska on his fat tire bike for two months now and I’m really glad to have had the chance to get to know him. 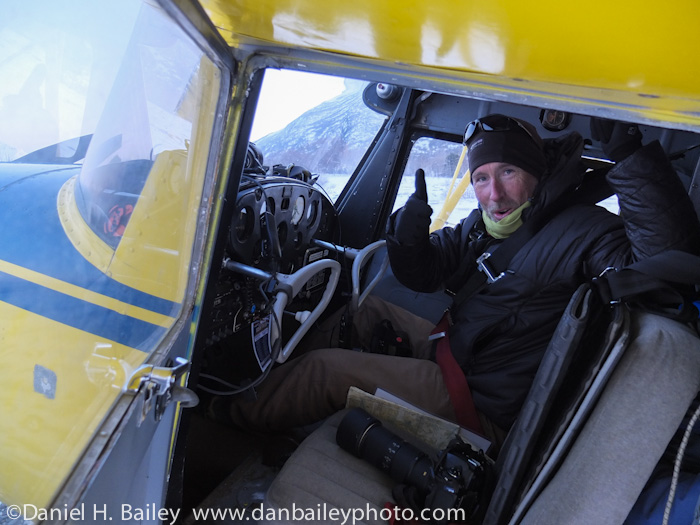 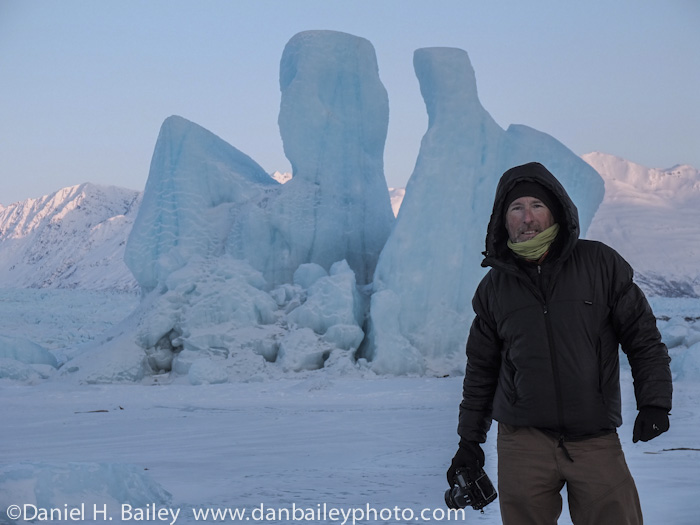 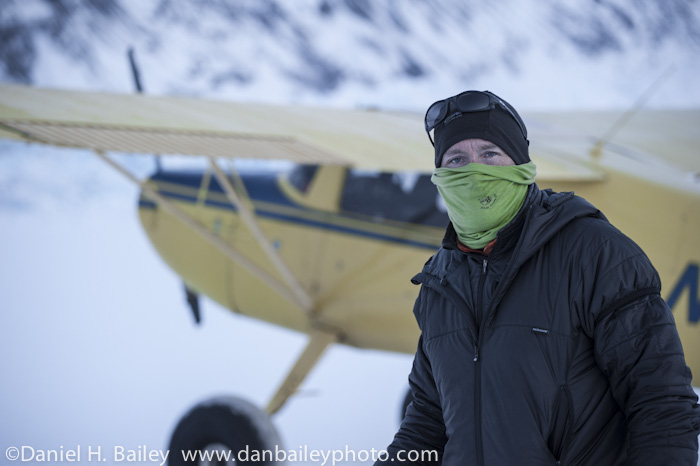